By Sarah Gottesman
The High Renaissance is often considered the peak of European art history, having ushered Leonardo da Vinci, Raphael, and Michelangelo into the canon, among many others. These artists revived the aesthetics of Ancient Greece, such as the contrapposto pose and the tondo composition, in addition to discovering new and innovative methods of artistic production. Each of these achievements required a new vocabulary to describe them, and many of the art terms that emerged are still in use today.
Contrapposto
The twisting contrapposto or “counterpose” is one of the most popular postures in Western portraiture—both in painting and sculpture. Invented by the ancient Greeks in the early 5th century B.C., the pose gives life to static figures, imbuing them with a natural sense of movement. A person standing in contrapposto leans all of his or her body weight on one leg (sometimes called the “engaged” leg), while the other, more relaxed leg bends at the knee. The figure’s torso, shoulders, and head all tilt away from the straightened leg, thus completing the twist.
While figures in contrapposto may appear true to life, the pose is actually quite uncomfortable to recreate—try standing in the stance of Michelangelo’s David (1501-1504) and see for yourself. The conceptual artist Bruce Nauman exposed the awkwardness of this historic stance in his video performance Walk with Contrapposto (1968), for which the artist tried to remain in the contrapposto pose while traveling through a narrow passageway.
Fresco
Fresco—the medium employed for Michelangelo’s Sistine Chapel Ceiling (1508-1512) and Raphael’s School of Athens (1509-1511)—is a wall-painting technique dating to antiquity. To create a fresco, artists apply a mixture of powdered pigments and water to wet lime plaster, prompting a chemical process that fuses the pigment with the wall. Because plaster dries quickly, artists must complete their frescoes in sections, each of which is called a giornata, Italian for “a day’s work.” While frescoes were most popular in ancient Rome and during the Italian Renaissance (Italy’s hot, dry climate providing especially favorable conditions for their preservation), the medium was revived during the 20th century by Mexican Muralists like Diego Rivera. 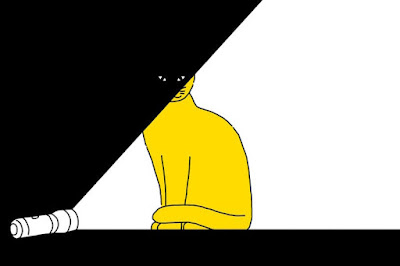 Chiaroscuro
The term chiaroscuro stems from the Italian words chiaro (“clear” or “bright”) and oscuro (“obscure” or “dark”), and refers to the arrangement of light and shade in a work of art. Renaissance master da Vinci is said to have invented chiaroscuro, discovering that he could portray depth through slow gradations of light and shadow. A century later, the Italian painter Caravaggio spearheaded a new method of chiaroscuro, using a single light source—such as a lit candle or an open window—to dramatically brighten his figures against a dark background. This emphasis on tonal contrast quickly spread across Europe, with followers of the style named the Caravaggisti.
To analyze the chiaroscuro elements of a painting, change the artwork from color to grayscale on your computer. This simple trick is widely practiced in art history classrooms, exposing the underlying tonal structure of a painting, photograph, or film.
Sfumato
Sfumato is another artistic innovation credited to da Vinci. Meaning “to evaporate like smoke,” sfumato is a painting technique that produces soft, hazy transitions between tones—the visual opposite of a sharp outline. The most famous example of sfumato is da Vinci’s Mona Lisa (1503-1506), which features smoky, almost-imperceptible gradations between light and shadow. This method of chiaroscuro is what gives the Mona Lisa her enigmatic smile, as the defining features of her expression—the curves of her lips and the look in her eyes—are masked under the haze of sfumato.
Impasto(in paste)
Thickly applied paint is called impasto. Unlike sfumato, which is produced through thin, invisible brushstrokes, impasto stands up on the canvas, giving otherwise flat images a three-dimensional texture. These marks call attention to the gesture of painting, making visible the artist’s brushstrokes or the cuts of the palette knife. Areas of impasto can also catch light from the surrounding room and cast a small shadow on the painting, heightening the chiaroscuro of the image. Baroque masters like Rembrandt van Rijn and Diego Velázquez used impasto precisely for this effect, rendering highlights in metal jewelry and armor with thicker paint so that they would shine even brighter.
To see whether a painting has areas of impasto, stand to the side of the artwork to view it in profile. This angle will help reveal whether the image has any brushstrokes that sit thickly on top of the canvas. Afterwards, return to viewing the painting head-on and look for these marks again, focusing in on how they may add natural highlights and shadows to the depicted scene. 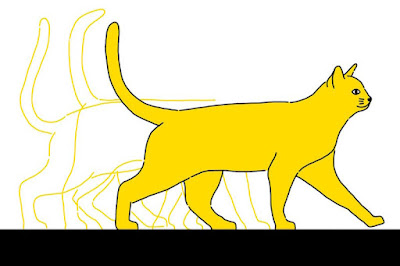 Pentimento
Pentimento or “repentance” refers to a change made by an artist during the painting process, evidenced by an image concealed within the work itself. Artists often alter their compositions as they are working—whether repositioning a subject’s hand or removing an entire figure from the scene—and then cover up these forms with a new layer of paint. Over time, this coating can fade away to reveal the previous version of the painting—the pentimento—that had been hiding underneath.
With modern technology, conservators can also uncover a painting’s pentimento using infrared scans and X-rays. Studying a painting’s pentimento can be part of the authentication process, as original works of art tend to have more hidden changes in comparison with their copies.
Tondo
A circular painting or sculpture is called a tondo, a term derived from the Italian word rotondo for “round.” Like the contrapposto pose, the tondo is an ancient Greek invention, which regained popularity during the Italian Renaissance. Some of the earliest examples of round compositions are found on Greek vases and shallow wine cups (called kylix), and feature mythological stories, scenes from everyday life, and geometric patterns. During the Renaissance, artisans looked to their Greek predecessors to decorate dishes and medallions with circular images, while painters like Raphael and Michelangelo elevated the form in large-scale religious paintings.
While tondi later fell out of fashion—the architect and philosopher Leon Battista Alberti declared that only rectangular canvases were fit for rendering scenes in linear perspective—they are experiencing a resurgence in contemporary art, with, for instance, Damien Hirst turning to the round form in his butterfly, dot, and splatter paintings.
Sprezzatura
“Obvious effort is the antithesis of grace,” wrote the Renaissance writer Baldassare Castiglione, who coined the term sprezzatura in his etiquette guide The Book of the Courtier in 1528. A characteristic of the Renaissance man, sprezzatura means not trying too hard, yet still having perfect conduct. In contemporary fashion, sprezzatura describes the look of artful dishevelment—the ability to appear put together while wearing mismatched patterns or a crooked bow tie.
Castiglione wrote about sprezzatura less than a decade after the deaths of Renaissance masters da Vinci and Raphael, who were both instrumental in adding a sense of nonchalance to the art of painting. These artists were among the first to depict women in three-quarter view, a much more relaxed pose compared to the Early Renaissance convention of displaying women in profile. In some of these portraits—like the Mona Lisa, for example—the subject gazes past the viewer with a look of slight boredom, the ultimate expression of Italian sprezzatura. 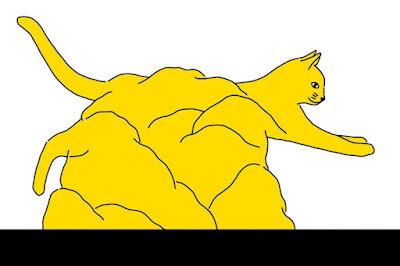 Non Finito
Non finito (literally “not finished”) artworks are those deliberately left incomplete by their makers. The most famous examples of non finito artworks are Michelangelo’s four prisoners, the Dying Slave, the Awakening Slave, the Bound Slave, and the Rebellious Slave, which he originally created for the tomb of Pope Julius II before the patron’s budget was cut and the tomb design altered. These partially carved figures emerge from rough blocks of marble, and reveal the tactile process of sculpting.
The Renaissance practice of leaving sculptures incomplete can be traced back to the ancient Greek philosophies of Plato. According to Plato, all artworks are somewhat incomplete, as they are never able to exceed the beauty of the Divine. Choosing to leave an artwork unfinished can be an homage to this idea, a demonstration that, as Michelangelo once said, “The true work of art is but a shadow of the divine perfection.” But the courage to say that an artwork is unfinished, yet still beautiful enough to go on view—now that takes sprezzatura, too.