Riccardo Muti interview with Dennis Polkow 12/17 — As Riccardo Muti prepares to conduct the 2018 annual Vienna New Year’s Concert that will be heard and seen across more than 90 countries, he discusses the behind-the-scenes process, its cultural milieu and considers the melancholic nostalgia embodied in the Viennese waltz with Chicago journalist Dennis Polkow in an all-new radio broadcast. The interview also includes details about a new asteroid named after Muti, as well as a look back and ahead at CSO tours and repertoire. 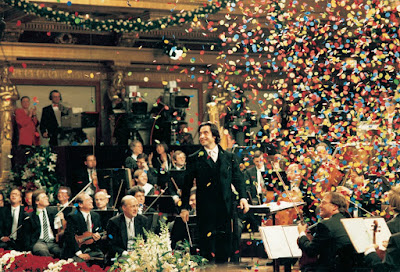 As Chicago Symphony Orchestra Music Director Riccardo Muti prepares to conduct the 2018 annual Vienna New Year’s Concert that will be heard and seen by as many as a billion people across more than 90 countries, he discusses the behind-the-scenes process, its cultural milieu and considers the melancholic nostalgia embodied in the Viennese waltz with Chicago journalist Dennis Polkow in an all-new radio broadcast from which the following interview was taken. The interview also includes details about a new asteroid named after Muti as well as a look back and ahead at CSO tours and repertoire. (Click here to hear the full interview.) For the Vienna concert, the local  air times are Jan. 1 at 8 p.m. CST on WTTW-Channel 11, with repeats on Jan. 2 at 1:30 a.m. and 2 p.m., and on radio, Jan. 1 at 10 a.m. via WFTM-FM (98.7).

It’s an unseasonably warm November afternoon near the end of Riccardo Muti’s late fall Chicago Symphony Orchestra residency, but the music director is already looking weeks ahead to New Year’s Day: “As soon as I get home [to Italy], I have to immediately spend an entire day doing parts,” says Muti. “Where I want there to be repeats, where not, for two hours of music. There are so many details to doing a Vienna New Year’s concert that the public never knows.”

Muti ought to know. He has done four New Year’s concerts with the Vienna Philharmonic Orchestra, the first back in 1993. “We have a long partnership,” says Muti, “47 years together: longer than any other orchestra I have worked with.” That lasting relationship began in 1971 at the Salzburg Festival at the invitation of Herbert von Karajan, then the festival’s artistic director.

In those years, concertmaster Willi Boskovsky led the annual VPO New Year’s concerts, which he did from 1955 until 1979; as general manager and principal conductor of the Vienna State Opera, Lorin Maazel took over from 1980 through 1986, after which a new system emerged where celebrated conductors were brought in annually, beginning with Karajan in 1987.

“When I was first asked to do the New Year’s concert,” Muti recalls, “for several weeks I said ‘no’ and refused to accept because I thought this concert should be conducted by conductors who have the music of the Strauss family or Lanner or Suppé in their blood. I asked, ‘Why should a Neapolitan be on the podium in the Musikverein on the first of January? I am from Napoli, I am not from Vienna.’

“They reminded me that Napoli and Vienna were very much connected culturally, that the Neapolitan school and Viennese school were two very important capitals in the world of music at that time. They also brought up the fact that the Queen of Napoli was Maria Carolina, the daughter of Maria Teresa. So they found all sorts of connections.

That first Muti-led New Year’s concert was such a success that he was offered a second in 1997, and again for 2000, the millennial year, “a great honor,” Muti concedes. “Everybody wanted to do that concert. That was very special not only because of the new millennium, but because for the first time, China was directly connected, so suddenly the number of people who saw the concert was more than 1 billion around the world.

“After 2000, I said, ‘That’s it,’ because all the other concerts seemed less important. But then I accepted in 2004 because they wanted me to do it, but then I stopped. People maybe don’t realize that the New Year’s concert is very demanding, very heavy and tiring for the preparation because you have to learn a lot of music. Despite what people can think, listening to the beautiful melodies of Strauss, it’s not easy music to conduct properly. So after 2004, I said, ‘Basta, that’s it. No more.’ And in fact, I didn’t do any more. But this time, again they came asking, ‘Please, Maestro, do it once more, because it’s been a long time since you have done it.’ So finally, I accepted last year to do this concert.

“When you have a busy schedule like I have with opera, concerts, recordings, music directorship of a major orchestra like the Chicago Symphony, you don’t have so much time free to study. You have to study new scores for contemporary music, modern music, old music that is new for you, so time free to study for a long program — because it’s two hours of music — requires a lot of energy and sacrifice. Every time you have one hour or two hours free, even if you have been busy during the day, you have find time to study, to be prepared when the end of December arrives. Then you have to go to Vienna, you arrive the 27th, then you have the rehearsal on the 28th and then the 29th.

“Dec. 30th is the first concert that is a sort of a general rehearsal, then the 31st is a concert in the evening, with television, so they practically film the entire program just like the first of January. The concert ends at 10 o’clock in the evening, then you have two hours for the end of the year. Maybe you want to celebrate a little bit: you cannot drink too much, just a glass of champagne, possibly of good quality, and then you go to bed after midnight at 1 o’clock. And the next morning at 8 o’clock, you have to be ready and in good health, in good spirits, in good energy, because at 11 o’clock sharp, the concert starts.”

There will be two nods to Muti’s Italian heritage in the 2018 New Year’s Concert: Johann Strauss’ William Tell Galopp and Johann Strauss Jr.’s Un ballo in maschera Quadrille, which Muti describes as “parodies of Rossini and Verdi, but done with great respect,” along with the signature waltzes long associated with these concerts.

“I can conduct a waltz, but I cannot dance a waltz,” Muti admits. “Sometime many years ago, my wife tried to convince me to, but then I was dancing on her feet, so she said, ‘That’s enough,’ and we stopped. But I find it very natural to conduct the waltz, but as pure music. The waltz is always in three: one, two, three; one, two, three. But the Viennese joke that the Viennese waltz is: one, two and maybe three; one, two and maybe three! There is a sort of hesitation or rubato that is not easy. You can try to imitate, but then it becomes a caricature of what for the Viennese is so, so natural. I’m sure I don’t have any Viennese blood, but on the other hand, as the Viennese used to say, ‘Who is a Viennese?’ A Viennese is a combination of Italian, Austrian, German, Czech, Hungarian, the former Yugoslavia, it is the combination, a melting pot of central Europe.

“What is important when you do the Viennese waltz is that you must feel that it is a combination of life and death. We must not forget that this music has a nostalgia, a melancholy, that comes from the period, that we are near the end of an empire. Not only do you feel this in the music of Bruckner, but the music of Mahler, and before that, in the music of the Strauss family: that something is about to disappear. And so it’s a combination of life and death, of smiles and tears together. That is the most difficult part of this kind of waltz. They are not full of joy. Maybe this is one of the reasons why on the first of January, this music enters into the homes of every county in the world and fits perfectly with the atmosphere of the New Year because there is a hope for the future that is coming, and yet a nostalgia for the past that is gone.”

Award-winning veteran journalist, critic, author, broadcaster and educator Dennis Polkow has been covering the CSO across various national and international media for more than 30 years and Riccardo Muti since his arrival as CSO music director in 2010. His Con Brio “with spirit” column in Newcity Chicago highlights multi-genre aesthetic sensitivity.