HOW ANTIQUITIES HAVE BEEN WEAPONIZED IN THE STRUGGLE TO PRESERVE CULTURE

Surveying the reporting on Syrian antiquities over the last six years reveals a parade of errors, but it is noteworthy that most, if not all, of the errors cut in the same way: to inflate the threat ISIS poses to cultural heritage while ignoring the threat posed by other armed groups.
Michael Press 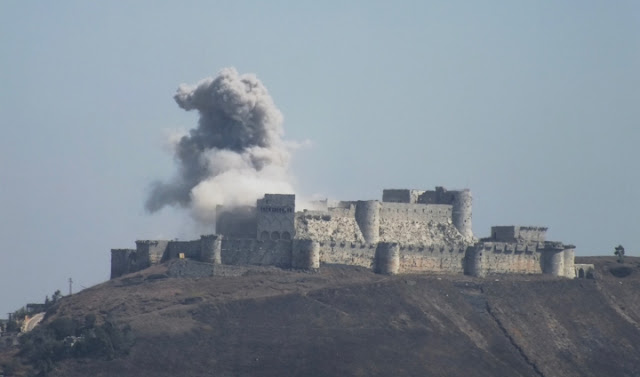 BLOOMINGTON, Ind. — It is a cool day in early spring of March 2016. Several men, some of them wearing masks, are dismantling what appears to be a medieval building in Al Rafid, a village near Quneitra in southwestern Syria. Boys are helping too, or at least playing in the rubble. We might be tempted to think we are watching ISIS members destroying a piece of cultural heritage. But no — according to the SMART news agency, this is actually a video of local villagers looking for material to rebuild their homes.

By now, the war in Syria has raged for more than six years. We have seen death on a massive scale and a heartbreaking refugee crisis, as well as serious threats to monuments and artifacts. Since early 2014, ISIS has been presented in news reports as the greatest threat not just to human life but also to cultural heritage in Syria. But cases like Al Rafid point to something else: the reality that looting of and damage to antiquities take many forms. And when we compare that reality to its portrayal in media outlets over the course of the war, we find that most reporting has ignored — or hidden — several basic facts.
ISIS is not responsible for the majority of antiquities looting in Syria.
By early 2013, experts were already pointing out that Assad’s forces, rebels, and jihadist groups were all involved in antiquities looting, before ISIS was in control of much territory. A study of satellite images of six select sites by the American Association for the Advancement of Science (AAAS), published in December 2014, showed significant looting by ISIS by this time, but also significant looting in areas controlled by other groups (though this was not emphasized by the press release or subsequent news reports). The most detailed study was published by the Cultural Heritage Initiatives (formerly the Syrian Heritage Initiative) of the American Schools of Oriental Research (ASOR CHI) in September 2015, when ISIS was close to its largest extent in Syria. The study determined that areas held by ISIS, Syrian government forces, Kurdish YPG, and other rebel groups all experienced significant looting of antiquities. More surprisingly, the study concluded that only 21.4% of the sites evaluated in ISIS-controlled territory had been looted, which was lower than percentages for YPG and Syrian opposition groups.

Overwhelmingly, however, news stories have focused (and continue to focus) on ISIS looting. We read several features on ISIS looters and trafficking. But no one to my knowledge has published “The Men Who Loot for Al Qaeda” (or Assad, or the Free Syrian Army). Headlines highlight ISIS even when stories include general warnings about looting and destruction in the Syrian Civil War: for example, “‘Broken System’ Allows ISIS to Profit From Looted Antiquities” (New York Times, Jan 9, 2016). Business Insider then took a warning about looting and destruction in general from this article (“We’re faced with the largest-scale mass destruction of cultural heritage since the Second World War”) and turned it, out of context, into a headline warning about ISIS: “ISIS’ looting of the Middle East is ‘the largest-scale mass destruction of cultural heritage since’ WWII” (January 12, 2016). ISIS is said to have dug up objects that appeared on the antiquities market before ISIS existed. Several stories link destructive looting at the major classical period site of Apamea to ISIS. ISIS has never been present at Apamea. At Palmyra, it is clear that Assad’s forces, rebel groups, and ISIS have all looted antiquities, but non-ISIS actions have been mostly ignored. Stories attempt to associate pre-ISIS looting at Palmyra with ISIS…………………