AN ALCHEMIST’S GUIDE TO THE ELIXIR OF ETERNAL LIFE

For those looking to try this at home, instructions — albeit ‘couched in rather obscure and arcane terminology’ — could be found in the Ripley Scroll, a manuscript named after George Ripley (circa 1415-1490), the most renowned of the 15th-century alchemists. In 1471, Ripley wrote The Compound of Alchemy […] divided into Twelve Gates, a long poem in Middle English. Such was his reputation that by 1700 a large body of alchemical works had been credited to him, including the eponymous scroll. 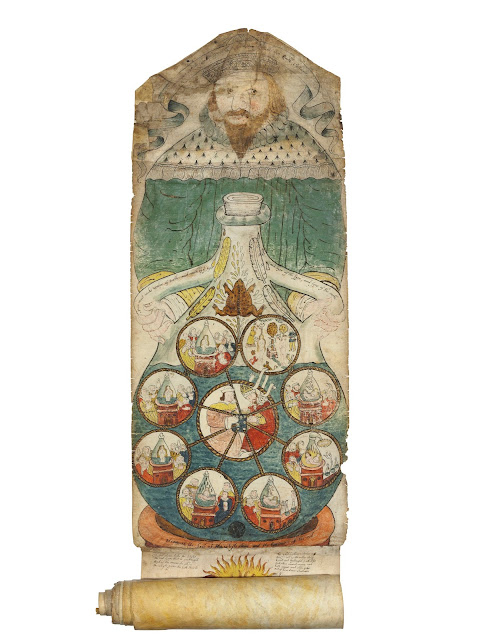 The Ripley Scroll, an illustrated alchemical manuscript in English and Latin on vellum, England 1624. 3720 x 275mm overall, seven membranes of varying widths and lengths. Estimate: £200,000-300,000. This lot is offered in Valuable Books and Manuscripts on 13 December 2017 at Christie’s in London

John Dee, the renowned Tudor mathematician, astronomer, astrologer and and advisor to Queen Elizabeth I, promoted Ripley’s reputation in England and abroad. ‘Sir Isaac Isaac Newton himself undertook lots of alchemical investigations,’ Sutton points out. ‘One of his notebooks appears to show a copy of the beginning of the Ripley Scroll, with the diagram of the Philosopher’s Flask’ — the glass vessel used for experiments.

On 13 December, one of 23 known copies of the Ripley Scroll will be offered in the Valuable Books and Manuscripts  sale at Christie’s in London. Dating from 1624, this is the only copy of the scroll in private hands. A copy belonging to the British Library is currently a centrepiece in its exhibition Harry Potter: A History of Magic.

The Ripley Scroll opens with a picture of the alchemist, ‘the creator figure’. He holds the Philosopher’s Egg — ‘the glass flask in which you make all your experiments’, Sutton explains. Its handles are inscribed, ’You must make water of earth and earth of the ayr and ayr of the fyre and fyre of the earth’…………………..