WHAT SOLD AT ART BASEL IN MIAMI BEACH 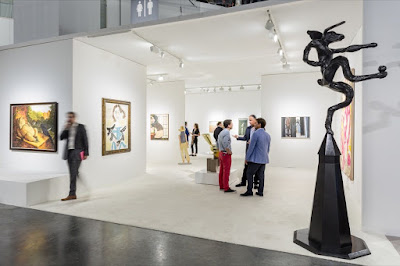 Installation view of Paul Kasmin’s booth at Art Basel in Miami Beach, 2017. Photo by Alain Almiñana for Artsy.
Will 2017 simply be known as the year of the $450 million Leonardo da Vinci or is a real art market rally underway? Signs pointed towards the latter at this year’s edition of Art Basel in Miami Beach, which closes on Sunday evening after a five-day run and offered some $3.5 billion in art for sale.
Despite gallery closures and continued challenges for mid-sized dealers, 2017 will likely see an improvement in the art market’s size over 2016. According to UBS chief investment officer Mike Ryan, “an obvious appetite for art right now, especially in the ultra high net worth space,” has combined with a near-unprecedented eight-year expansion in global equity markets (currently the third-longest in history), providing the liquidity to feed that appetite.
Whispers among dealers and collectors that a downturn in the market is on the horizon were prevalent at Art Basel in Miami Beach and analysts at Bank of America have predicted a correction in equity markets will take place in mid-2018. However, Ryan said he doesn’t expect the backdrop fueling the art market’s rebound to change in the near-term, and projects the current expansion will continue not just through 2018 but well into 2019.
“As long as the economy is doing well and corporate earnings are growing at a healthy rate, which I think they will, that’s going to generate the kind of income that’s going to be important to supporting the art market,” he said. 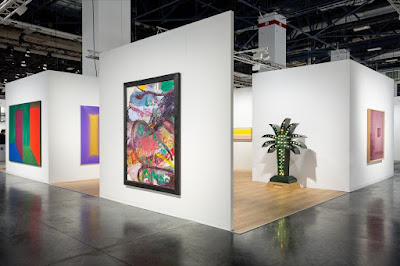 “Bull markets do not die of old age; they die of cause,” Ryan said, citing data from the San Francisco branch of the Federal Reserve that shows the likelihood of recession does not to rise significantly as periods of expansion grow older………………………..

“It’s going to affect the very high end of the market for Americans and Americans make up a very big chunk of the very high end of the market,” he said. “Some major collectors are going to sell a little less, which is going to push up the prices and also mean that fewer people will be able to participate.”
While in the sunshine state this week, though, the feeling was: make hay.
Alexander Forbes is Artsy’s Executive Editor.
Stay up to date with Artsy Editorial