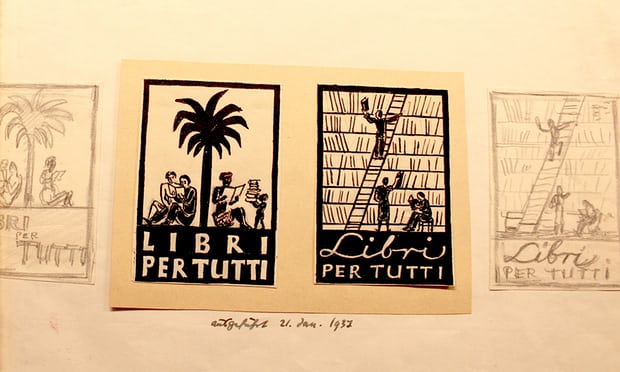 Elizabeth Friedlander’s drawings for a Mondadori ad in 1937. Photograph: Elizabeth Friedlander/Courtesy of the Ditchling Museum
Maev Kennedy
Few will recognise the name Elizabeth Friedlander but many may be surprised to discover they have examples ofthe artist’s work at home, in the thousands of books, cards, posters and advertisements she designed, or even text set in Elizabeth-Antiqua, the font she created.

Perhaps Friedlander’s most famous work is the classic volumes of the 1950s and 60s she designed for publishers including Penguin, Reader’s Digest and Mills & Boon.

An exhibition opening at the Museum of Art and Craft in Ditchling, East Sussex, in January, the first devoted entirely to her work, will include some of her more recognisable work as well as delicate handpainted geometric designs for covers and endpapers, and commercial work including technical drawings for cosmetics. 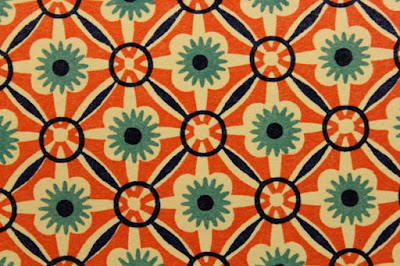 A printed paper pattern from the Friedlander archive. Photograph: Elizabeth Friedlander/Courtesy of the Ditchling Museum

When she fled Nazi Germany in 1936, and then a few years later Italy as the net tightening on Jews made it impossible for her to work, she took three treasures with her: two portfolios of her work and an early 18th-century Klotz violin that had belonged to her mother. The items – which stayed with her through her years working in England, and travelled again to her final home in Ireland – will be on display for the first time at the exhibition.
It will also include some of her wartime work – designs for food and clothing stamps – but she also worked forging Nazi documents and stamps for the Political Intelligence Unit. She designed Christmas cards for her colleagues in the unit, but only those in the know could have realised in 1942 that “The Season’s Greetings from Room 609A” came from within a secretive government department based at Bush House in London. She was EF; EH was the author Ellic Howe, an expert in psychological warfare and black propaganda.

The exhibition is curated by the artist Katharine Meynell, who had never heard of Friedlander until she found a volume of correspondence and original artwork among the papers of her grandfather Sir Francis Meynell.

He was a poet, printer, socialist and conscientious objector, co-founder of the Nonesuch Press as well as a friend and patron to Friedlander. He gave her invaluable networking connections when she came to Britain on the only visa she could get, as a domestic servant, after repeatedly being refused admission to the United States even though she had offers of work there.
In the early 60s, Friedlander followed her friend Alessandro McMahon to Kinsale, in Cork, where she made a circle of artistic friends including the writers Elizabeth Bowen and Molly Keane, and grew exotic vegetables from seeds imported from Italy. Though failing eyesight limited her work, she continued to create striking pieces for local friends and firms including a map showing the best sites for fishermen.

Little was signed, and there are only a handful of photographs, a couple of self-portrait sketches from her art student days, and one biographical study by Pauline Paucker published in a limited edition. Meynell spent months going through uncatalogued archive material in Cork: “I only wanted to put in the things that were really brilliant,” she explained.

When Friedlander died in 1984, she left her archive and the violin to her friend Sheila Goldberg, the wife of Gerald Goldberg, who became the first Jewish lord mayor of Cork. They in turn left the archive to University College Cork, which has loaned most of the original graphic work, and the beloved violin to the Cork School of Music, which loans it every year to an outstanding pupil. The violin will be heard again in England for the first time in more than half a century when it is played at a recital during the exhibition.