Contemporary films by women filmmakers go on view at the MoMA, with must-see screenings and discussions all week long in this new seasonal series.
Deena ElGenaidi 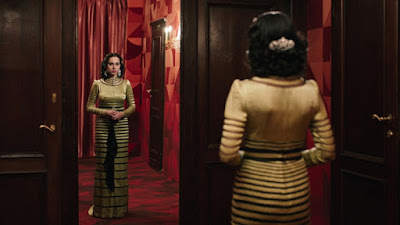 Beginning this Thursday, the Museum of Modern Art will host The Future of Film is Female, a new seasonal series promoting contemporary films directed by women in the early stages of their careers. The series will run from July 26 through August 2 and will feature films like Shirin Neshat’s Looking for Oum Kulthum — the story of an exiled Iranian woman artist and filmmaker making a film about the famed Egyptian singer — as well as films by Gillian Robespierre, Maysaloun Hamoud, Coralie Fargeat, and Erin Lee Carr. There will also be short films “that explore dark corners of the female experience,” according to the MoMA’s website.
Each film in this series was produced with limited resources and no major industry connections in order to provide a platform to early-career women filmmakers, placing them “on equal footing with their male counterparts.” This is a series you won’t want to miss, with the first film, Looking for Oum Kulthum, screening on Thursday at 7:00 pm, followed by a discussion with the filmmakers. The full schedule can be found here.
Where: The Museum of Modern Art, The Roy and Niuta Titus Theaters (11 West 53rd Street, Midtown, Manhattan)