The crashes of an automatic gong become a dire melody and meditation on the horrors and loss defining the Anthropocene.
Ben Valentine 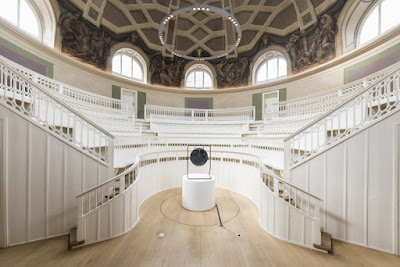 BERLIN — An eerie sound reverberates throughout the quiet halls once more, a meditative, yet disturbing aural backdrop. The gong rings out every 19 minutes, and once I know why, the experience becomes deeply haunting. Although I’ve felt the term does not fit with the gentle reverberating hum, technically speaking, a gong crashes. Perhaps that description is suitable for this particular gong; another 19 minutes, another crash.

Taking the form of a Chao Gong with the earth-and-hourglass extinction symbol on the front, “Extinction Gong,” (2017) by Crystelle Vu and Julian Oliver, crashes to the tragic tune of the current, highly accelerated global species extinction rate. Prior to modern civilization, this rate was between one to five a year. Prominent biologist E.O. Wilson believes that number has accelerated dramatically, to one species extinction every 19 minutes. The resulting 27,000 annual losses are memorialized on the automatic gong, becoming a dire melody and meditation of the horrors and loss defining the Anthropocene. Perhaps “crash” still isn’t exactly right, but what term could ever be suitable for the elegy of an entire species? 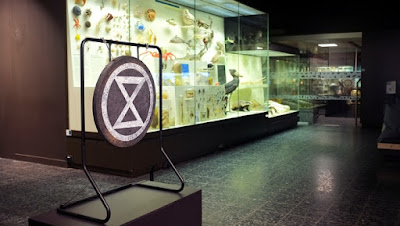 “Extinction Gong,” was commissioned for the three-part exhibition, Disappearing Legacies: The World as Forest, currently at the Tieranatomisches Theater, Humboldt-University, Berlin. The exhibition seeks to confront traditional understanding and representations of nature within the context of the sixth great extinction event. The show is curated by Anna-Sophie Springer and Dr. Etienne Turpin, both of whom have long investigated the social, cultural, and historical constructions of nature, about which I interviewed them three years ago for Hyperallergic.

Building the piece, the artists first connected “Extinction Gong” to a virtual private network (VPN) gateway over a 4G uplink, polling the International Union for Conservation of Nature’s (IUCN) Red List for any extinctions. The artists told me, “we soon discovered it can take decades for the IUCN to reevaluate the categories of species, a cycle seen as too slow given the accelerating changes in habitats observed by scientists.” Crashes every 19 minutes is too fast for leading scientific documentation to keep up.
Now, Vu and Oliver manually scour reports from the biology community for any confirmed extinctions. Should biologists declare a new species extinct while  “Extinction Gong” is on display, the artists will activate a special program via their VPN to name the extirpated. The ceremony consists of four hammer strikes in quick succession, followed by a text-to-speech voicing of the Latin name of the species annihilated. In this way, the “Extinction Gong” becomes a living, responsive memorial to species we will never know, a requiem to life lost.

The aural quality of “Extinction Gong” nags at the visitor, infects my experience, even after I’ve turned away. “We hope that any grief inspired in the public will encourage them to engage in protecting biodiversity,” Vu and Oliver told me. “Without sufficient biodiversity, earth can no longer host the human project.” The artists note that much of our medicine, food, and our general well being, is always reliant on and in dialogue with nonhuman species and ecosystems.

In terms of art history, the “Extinction Gong” is most obviously in dialogue with Maya Lin’s “What is Missing” (2009), which is both an installation and multimedia website. Physically, “What is Missing” consists of a bronze megaphone with salvaged redwood lining the inside. The sculpture telescopes towards a video at its interior base that plays sounds and visuals of various critters extinct or endangered, looping on a 20-minute cycle. The website is an interactive archive documenting these endangered and extinct life forms.

While Lin’s installation is more visually compelling than “Extinction Gong,” she ultimately adopts a more didactic approach. Lin aims to teach (and hopefully change behavior), while Vu and Oliver’s gong creates a space for a meditative reflection on the state of biodiversity and the role of technology therein. The open question is which approach ultimately effects greater change?
There is also a fruitful dialogue to be had when considering “Extinction Gong,” in relationship with John Gerrard’s Flag series (2017). Both pieces seek to confront the anthropocene using the technologies that, in part, define and helped to create the epoch. Like the gong, Gerrard’s algorithmic, automated, and ultimately detached view of the state of world, is problematic. Are these methodologies enabling or confronting this pollution? Can technologies so deeply entwined with habitat loss be repurposed as solutions toward conservation? While Maya Lin clearly claims “yes,” Gerrard’s Flag series and “Extinction Gong,” leave us wondering.

The “Extinction Gong’s” automation troubles the direness of the event it commemorates. My initial reaction to the installation was that this is a tacky ceremony for such a bleak event. How can we not even muster the energy to give a heartfelt elegy by voice or hand? But then, isn’t it so fitting too? The technology and automation remind us that capitalism has gone on autopilot, and must expand, develop, mine, and drill, baby, drill, ever more, no matter the cost. Maybe we’ll walk ourselves into extinction playing Pokemon Go.
“So precarious and complex is our planetary situation today” Vu and Oliver told me, “that in order to understand our way through this, we have to heavily lean on our our technology. The irony of a computer controlled instrument signaling the rate of extinction is something we appreciate about the piece.” 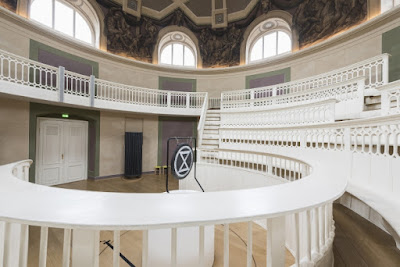 The “Extinction Gong,” asks, whether this technology can slow the extinction rate, or only replicate or speed up the loss. Ultimately, this a question of our will, whether we have the will to use the technologies we have to change course Or will we look at the gong, read the text, nod our heads, say “interesting,” and continue with our daily lives? Another crash, then a brief silence.

In my dark imaginaries of the future, the “Extinction Gong” will be beating twice a minute in a long emptied room. Technology will have won in the battle between biodiversity and progress, but few will be left to reap any benefits.

The “Extinction Gong,” is currently exhibited as part of the Disappearing Legacies: The World as Forest exhibition, the second iteration of which runs through August 26th at the Hermann von Helmholtz Center for Cultural Techniques (Palais am Festungsgraben) Berlin, Germany.