A site in Israel continues to turn up stunning polychromatic mosaics from the late Roman empire that challenge current notions of ancient Jewish aesthetics and the art of depicting scripture.
Sarah E. Bond 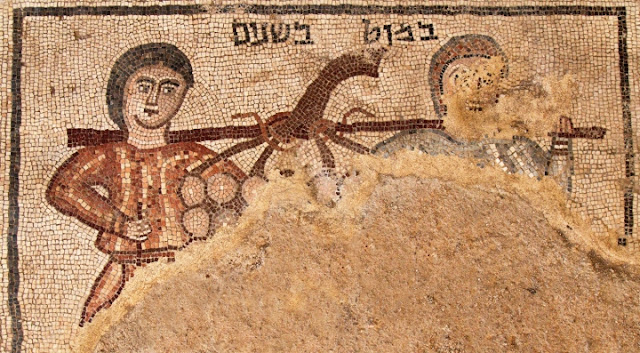 The newest mosaic to be excavated from the late Roman synagogue at Huqoq is from the north aisle and depicts the spies of Moses carrying clusters of grapes to explore Canaan, as referenced in the Bible, Numbers 13:23 (all images copyright: Jim Haberman, via UNC-Chapel Hill and used by permission unless otherwise noted)

At the ancient site of Huqoq, near the Sea of Galilee in modern Israel, a number of stunning mosaics depicting biblical, astrological, and historical narratives have been uncovered in a Jewish village that flourished during the late Roman empire. The colorful and large number of mosaics found in a synagogue challenge traditional views about Jewish art of the period as symbolic rather than representational of biblical texts, bland, and in decline during the period.

Since 2011, Jodi Magness, an archaeologist and distinguished professor of early Judaism in the Department of Religious Studies at UNC-Chapel Hill, has directed students and researchers excavating the site of Horbat Huqoq (referred to as Huqoq) in Eastern Galilee. In 2012, during excavations at the site’s synagogue, rich polychromatic mosaics that vividly depict various scenes from the Hebrew Bible began to come to light. The scenes discovered this summer also have accompanying Hebrew quotations. One mosaic depicts the Greco-Roman sun-god Helios surrounded by the signs of the zodiac accompanied by personifications of the months, and another mosaic depicts an historical event that may involve Alexander the Great. 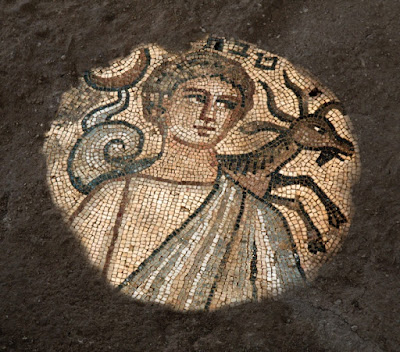 The discovery of these late antique mosaics is sensational due in part to the ways in which they challenge current scholarship and understanding of Jewish art created after the establishment of Christianity as the official religion of the empire during the fourth century CE. Magness notes the ways they are shifting ideas of Jewish art of the period:

The mosaics decorating the floor of the Huqoq synagogue revolutionize our understanding of Judaism in this period … Ancient Jewish art is often thought to be aniconic, or lacking images. But these mosaics, colorful and filled with figured scenes, attest to a rich visual culture as well as to the dynamism and diversity of Judaism in the Late Roman and Byzantine periods.

Rather than being in decline, the Huqoq mosaics attest to an economically and artistically vibrant community proud of its religious identity despite the negative views of Judaism expressed by many early Christian authors.

In an interview with Hyperallergic, Prof. Magness noted how such mosaic scenes are identified by the archaeologists working on site:

In most cases, the identification of the biblical episodes in our mosaic panels is obvious from the depictions (for example: pairs of animals in the Noah’s ark scene; Samson carrying the gate of Gaza on his shoulders; Jonah’s feet dangling out of the mouth of a large fish). This summer’s panels are a bit different in that each one is labeled (in Hebrew) with the relevant biblical passage that identifies it (e.g. the Spies Panel is labeled with the phrase “a pole between two” from Numbers 13).

As with many Greek, Roman, and early Christian mosaics, labels and quotations worked together with an image to remind the viewer of the story or scripture.
Teams of artisans created stunning mosaics in workshops in the late Roman world. Nearby sites like Beit She’an and Beth’Alpha have revealed Jewish mosaicists who were often related by blood and actively worked in the area of Galilee. However, Magness notes that the Huqoq mosaicists are still an enigma:

We don’t know who the mosaicists were. We are pretty sure there was a local workshop, due to similarities with the mosaics at Wadi Hamam (another synagogue nearby), but it is also possible according to my mosaics specialist Dr. Karen Britt, that some of our mosaics (in particular the elephant mosaic) were made by non-local artists.

The most sensational mosaic yet found at Huqoq involves a possible depiction of Alexander the Great. As was reported in 2016, the fifth-century CE mosaic portrays a meeting between two high-ranking male figures. The one to the right appears to be a military general leading his troops. Since the panel is not labeled by inscriptions, archaeologists and art historians disagree about the identity of the figures. The rather smiley elephants geared up for battle have led some to suggest this is a depiction of the story of the Maccabees in the second century BCE, since Alexander’s successor dynasty, known as the Seleucids, were known to use elephants in battle. Britt and Ra’anan Boustan, who published the mosaic, identify it as an episode in Hasmonean history. However, Magness thinks it may be a depiction of Alexander. Stories of his meeting with Jerusalem’s high priest circulated and were later written down by the Roman-era Jewish historian Josephus in the first century CE, and are preserved in rabbinic literature and other sources. 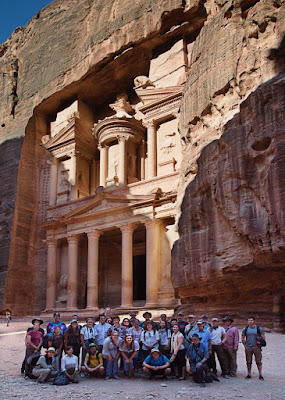 The Huqoq mosaics will likely help to change the way we understand Jewish art of the late Roman and early Byzantine periods. As Magness notes: “I hope people might learn from our discoveries about what a dynamic and interesting period this is — including the continued dynamism and diversity of Judaism against the background of the spread of Christianity.” She also has other aspirations for her dig that involve perceptions of the archaeological work currently being done in Israel: “It would be nice if the public in North America realized that Israel is a very safe place to visit and work. I often talk to students whose parents don’t want to let them travel to Israel because they think it is unsafe.” This discovery serves as a salient reminder that licensed archaeological fieldwork performed every year in Israel is an important way that both students and researchers can further understand the ancient world and challenge the ways we view the people of the past.