PBS has now finished airing its series called Civilizations, a nine-part look at the global history of art, which is a well meaning but flawed production.
Michael Press 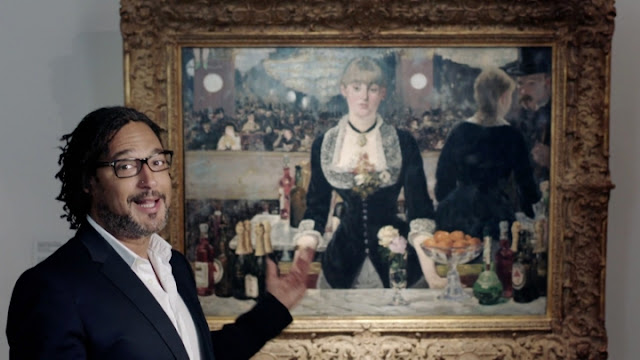 Still from Civilizations with David Olusoga presenting Manet’s “A Bar at the Folies-Bergère” in episode 8, “The Cult of Progress”

“At this historic moment … the provincialism of our traditional histories, which began with Greece and summed up Asia in a line, has become no mere academic error, but a possibly fatal future perspective and intelligence.” As much as this judgment may seem to fit the rise of rightwing nationalism in our own historical moment, it was actually written by the American historian and philosopher Will Durant in 1935.  We can certainly understand Durant’s judgment, amid the rise of Naziism and the specter of a world war. And Durant would address the neglect of Asian history: he devoted the entire first book of his and his wife’s 11-volume The Story of Civilization to it. That first volume was called “Our Oriental Heritage,” and include Asian history up to the present, as a prelude to the subsequent ten volumes on European history from ancient Greece to Napoleon. Durant observed that, in his day, Asia was “swelling with resurrected life” (it hadn’t for the previous centuries?) and warned of a coming “all-embracing conflict between the East and the West.”
The problem Durant identifies may sound familiar, but his analysis and solution would hardly be satisfactory today. They point, however, to the challenge of writing history, especially the history of this thing we sometimes call “civilization.” Who is telling the story, when and where they are telling it, all have enormous effects on what it looks and sounds like. But one constant is that, among European and American histories of “civilization,” the word tends to stand for “Western civilization.” Like Durant, we are always trying, and failing, to move beyond our provincial views of human development as we write about it. 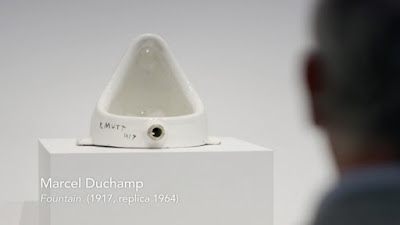 Still from Civilizations where Simon Schama gazes at a replica of Marcel Duchamp’s Fountain in episode 9, “What Is Art Good For?”
w finished airing its own series called Civilizations, a nine-part look at the global history of art. The series was produced by Nutopia for PBS and the BBC, with distinct versions of the series for each network. This meant that there were two versions of each episode, varying drastically from each other. Opinions of the series have also varied drastically: The Washington Post declared it “the most ambitious story about art ever told on television” whose success is based on it being “willing to tell big stories.” The Wall Street Journal, on the other hand, worried that the series was a “largely value-free approach to the world’s wonders” — except for its view of the West. “If there are any barbarians in this series, they are the denizens of Europe,” declared the Journal’s Eric Gibson. What are we to make of all this?

Civilizations reworks Kenneth Clark’s famous BBC documentary series Civilisation (1969). That series focused solely on the medieval and modern art traditions of Western Europe. The current one expands to the complete history of art of the entire globe — thus the change from singular to plural Civilizations — all the way from the Stone Age to the present. To deal with this vastly broader range, the series expands from one presenter to three: Simon Schama, Mary Beard, and David Olusoga. It seems these changes are geared to address criticisms leveled at Clark’s original series: it was blinkered, ignored the rich artistic traditions of the rest of the world, and featured a parade of great men (“one damn genius after the next,” in Beard’s own words) — discussed and analyzed by another great man. 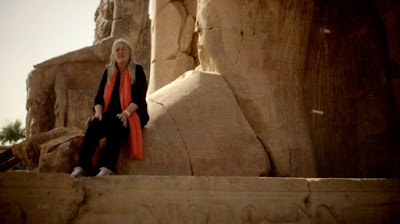 Still from Civilizations in which Mary Beard says “The history of art is not just the history of artists . . . it’s also the history of the men and women who looked, and interpreted what they saw;” Beard on one of the colossi of Memnon, discussing ways of seeing art in episode 2, “How Do We Look?”

At least on the surface, the current series displays a much greater attention to diversity. Some of the episodes, such as Beard’s “How Do We Look?” and Olusoga’s “The Cult of Progress,” make efforts to incorporate recent scholarly approaches to art and history, looking at the Western art tradition through the lenses of postcolonialism and gender studies. Among other things, they do a good job of highlighting the sometimes surprising interactions between Europe and the rest of the world.
The series has other things to recommend it, too. The presenters are all engaging. Above all, the cinematography is stunning. The use of drone cameras, slowly panning over a site or landscape or work of art, gives a sense of the grandeur that we might get on the spot.
But as viewers we keep coming back to this thing called “civilization.” What exactly is it? At times the series seems to equate it with “culture” or “society,” but at other times with “art” — and often with “high art.” With three different presenters writing their own episodes, it is predictable we would end up with different definitions. But the series makes no attempt to resolve the conflict among them, or even to acknowledge the differences.
And Civilizations is an odd choice for a title. It is an odd choice for a series that focuses on the history of art. More than this, “civilization” is a heavily loaded term, one that presumes an opposite: “barbarism.” Powerful countries (notably European powers) have used this dualism to justify war, conquest, removal of resources, and colonizing much of the rest of the world. This problem is sometimes acknowledged (clearly and effectively in “The Cult of Progress”), but for much of the series “civilization” is presented as an entirely unproblematic term.
It’s also odd, to say the least, that an art series called Civilizations focuses so much on individual artists and artworks (as opposed to broader, systemic understandings of art). Schama’s episode “Renaissances” introduces the idea of the “cult of the artist” in early modern Europe, contrasting it with views of art and artists in other places, such as Mughal India. Good — we see that our focus on the genius of the individual artist is not inevitable, but a cultural choice. It’s too bad that this insight is then left behind. Instead, the rest of the series largely pays homage to that very cult. So much of the later episodes involve one of the presenters standing in front of a work of art (usually a painting), studying it intently (to dramatic music), and then discussing it for the audience. Individual works are declared “revolutionary,” “a masterpiece,” “a master class” (Manet’s “A Bar at the Folies-Bergère” (1882) is called a “masterpiece” and twice a “master class,” all in just over a minute.) Van Gogh writes of a coming “messiah of art;” Matisse is the “fulfillment of that prophecy.” Artists are “giants” and “masters.” The European view wins out. 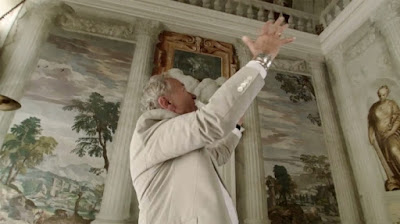 Still from Civilizations with Simon Schama in the Villa Barbaro, in episode 6, “Paradise on Earth”

The European view wins out in other places, too. When we get presentations of the art of non-Western societies, particularly in Schama’s episodes, these are digressions from the overall narrative arc, which is the story of the development of European (and to a lesser extent American) art. The takeaway is that so much of the world’s artistic production — Japanese ukiyo-e prints, Ottoman mosques, Mughal paintings, San rock art in southern Africa, Maori tattoos (ta moko) — matters primarily for what it can tell us about Western art, about how it influenced European masters, or how it was affected by European colonialism. It doesn’t help that the discussion of non-Western art is often inaccurate or outdated.
To be clear, I think Civilizations makes serious efforts to be inclusive. As art historian Yael Rice has noted about its Eurocentric discussion of Mughal and Ottoman art, these problems are likely not intentional. They are perhaps not surprising, though: after all, the production is British and American. And all of the presenters are British. 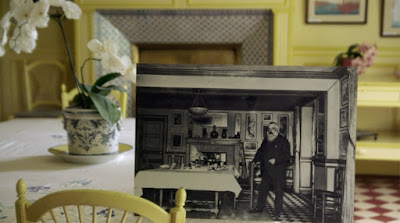 Still from Civilizations, looking at the dining room of Claude Monet’s house in Giverny today, with a photograph showing Monet in his dining room with ukiyo-e prints on the walls in the episode 7, “Color and Light”

At first, I thought that what we have is a well-meaning but flawed series, wasting its several strengths. But it might be more helpful to wonder if the underlying conservatism of the series is inevitable. The stunning visuals and dramatic music are the language of a Hollywood blockbuster — and this is simply not a language geared to present something truly groundbreaking or radical. The slow moving drone cameras, despite their sophistication, ultimately come off as stuffy, clichéd, and plodding, an attempt at projecting gravitas that comes to feel hollow and formulaic with repetition. A few moments are notable for breaking out of this — the camera spinning around a room in the Villa Barbaro while Schama discusses its dizzying effects; or panning through blackness from Goya’s first painting of the San Isidro festival to his later treatment of the scene among his Black Paintings; or jumping from one to another of Mondrian’s lively, late New York City paintings while swing-era jazz plays in the background. But these stand out because they are relatively few. In these and other important respects, Civilizations has not moved much beyond Clark’s series nearly a half-century ago (as pointed out in an insightful review by Mark Lawson in The Guardian).
It’s worthwhile to compare Civilizations to another decades-old series, Ways of Seeing with John Berger. At certain points, particularly in Beard’s “How Do We Look?”, the series echoes some of Berger’s concerns. (I owe this comparison to art historian Shannon Steiner). Like Kenneth Clark’s Civilisation, Ways of Seeing is now considered a classic art history TV series. Unlike Civilisation, it was a low-budget production, but it took full advantage of these limits by constantly challenging the viewer. The unorthodox use of camera work, the non-magisterial presenter, the extended discussions with non-experts for their opinions on art — all of these aspects are striking, and are mostly missing from Civilizations
State-of-the-art technology and superficial diversity don’t necessarily produce a better program — they tend to give us old ideas presented in new packaging. More than this, they are what Berger (as a Marxist critic) called “mystification.” The presentations often present a work as a masterpiece, but we do not learn why. They do not explain, but instead obscure the meaning and function of the art.
Looking back on these series, I’m left with a troubling thought: Do any of these drawbacks matter? In the end, I think we often want to be mystified by art. Even as we study art (like so many things, really) to explain it, many of us are drawn to it by its mystery, its beauty. We want it to be inexplicable, a spiritual phenomenon acting on the soul, rather than something rational that can be explained. This is the paradox at the heart of our study of art, and Civilizations is incapable of resolving it.
https://hyperallergic.com/452722/the-new-bbc-tv-series-and-what-we-mean-when-we-say-civilization/?utm_medium=email&utm_campaign=July%2027%202018%20Daily%20-