A documentary about the life and mind of Robin Williams is conventional yet beautifully made, taking us closer to the manic mystery of his genius. 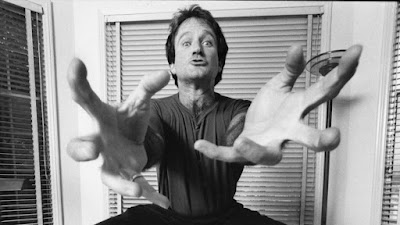 In “Robin Williams: Come Inside My Mind,” a documentary that’s sharp-edged, humane, and deeply researched enough to take you closer to the manic engine of Williams’ brilliance and pain than you were before, the smartest decision made by the director, Marina Zenovich, was to use a great many never-before-seen outtakes, as well as clips from obscure or forgotten performances, so that Williams’ routines hit the audience with a fresh ping. In one of the most spectacular of these clips, the film replays the extended acceptance speech he made for Best Actor at the 2003 Critics’ Choice awards.

Williams didn’t actually win the award. He was up for his turn as a creepy psycho nerd in “One Hour Photo” (to me, a rather overrated stunt of a performance), and he lost. There was, in fact, a tie that year, with the award going to both the other nominees: Daniel Day-Lewis for “Gangs of New York” and Jack Nicholson for “About Schmidt.” But when Nicholson got up to give his speech, he confessed to being so “baked” that he invited Williams to come up to the podium, and Williams was off and running. He gave an acceptance speech as Nicholson; he mimed a lascivious Jack fantasy in deaf sign language; and since the Critics’ Choice awards are the height of inconsequentiality, by the time he was two minutes into his speech, it was almost as if he had won.

It was one of Williams’ patented drive-by-comedy circus psychodramas. For those few minutes, he didn’t just rule the room — he owned the night. And yet, listening to his speech, especially the latter part of it, where he leaves the Nicholson impersonation behind, Williams lets slip out, with unusual candor, how driven he was to be up at that podium — and, in fact, how wounded he was to be passed over by both the other nominees. It’s a cliché (and a true one) that every comedian wants to be loved and admired through laughter, but Robin Williams’ relation to that dynamic was nearly metaphysical. His credo might have been: “I make you laugh, therefore I am.”

In the late ’70s, when he became an instant superstar on “Mork & Mindy,” and through much of the next decade, it was easy to look at Robin Williams and think that this comedian with the mind of a main-frame computer, who didn’t just improvise but told jokes at the warp speed of his free associations, was more or less the person you saw up on stage. Sure, he could be quiet and sincere, but it wasn’t a mode he seemed to prefer.

That’s why he would do a comedy show and then unwind, later that night, with an hour of improv. Comedy — literally — came to Williams as naturally as breathing. It was almost a greater effort for him not to do comedy. The documentary opens with a startling clip of Williams on “Inside the Actors Studio,” and when James Lipton asks him how his mind works, he goes into a monologue of sheer nonsense that is somehow impeccably logical, revving up even the usual Williams pace, so that he’s working right from the outer limits of his brain.

By the early ’90s, however, thanks to our increasingly “intimate” and omnipresent celebrity culture, the other side of Robin Williams — the side that was moody and vulnerable and insecure, as well as a victim of addictions that could have destroyed him — became an essential part of the public’s image of him. “Come Inside My Mind,” an HBO film that takes the form of a standard chronological biographical portrait, treats the yin and yang of Williams as his fundamental aspect.

He speaks, in voice-over, about the first time he ever did comedy in front of an audience, when he was in high school, presenting an on-stage impersonation of one of his history teachers. There’s an audiotape of it, which we hear, and the bit brings down the house; listening to its early brilliance, you can almost see the teacher. At that very moment, by his own description, Williams got the bug.

A little later, while he was an acting student at Juilliard, he studied under John Houseman and took extraordinary pride in the moment when he actually got the stone-faced Houseman to laugh. We see a clip of Williams at Juilliard doing improv, cracking up the class, and Williams says it was “like sex, only without the guilt.” It sounds like a figure of speech to say that he was hooked, but the sheer speed of his japery, and the laughs that went off pop pop pop around him, reinforced the addiction of it. Each joke was like a swig or a line, and he had to come back for more. It was comedy as therapy as spiritual cocaine.

Zenovich, the director of “Roman Polanski: Wanted and Desired,” offers just what you want from a documentary like this one: She brings us closer to events that have been covered many times, deepening — or overturning — what we think we know about them. The evocation of Williams’ booze-and-coke-and-sex benders, in the years after he got famous, is harrowing. There’s a clip of him on the set of “Mork & Mindy” confessing, in the form of a joke, how he feels like crap and just wants to do another line, and we hear a story about how he would pluck a woman out of the audience at a comedy club and just leave with her, stranding her date. A close-up description of the night John Belushi died reveals how and why that tragic event was enough to scare Williams straight.

We process the intensity of Williams’ career terrors: the commercial and artistic infamy of his first movie, “Popeye,” in 1980 (at the premiere, a photographer snarked to him, “Welcome to show business”), and how he railed against the suits at ABC after “Mork & Mindy” was cancelled, when he was really in a rage against his own has-been status.

And Williams’ personal life comes across with a bittersweet vividness. We hear about his experience growing up as an only child, as well as the step-brothers he scarcely knew of, his outrageous cut-up of a mom, and the cold-fish father whose rare response of laughter to Jonathan Winters may have cued Williams to go in that direction. The movie argues, convincingly, that Williams’ first marriage, to Valerie Velardie (who, in the film, speaks of him with nothing but warmth), was already over when he commenced a relationship with his former nanny, Marsha Garces, and that the press version of what happened — that it was all going on simultaneously — was pure fiction.

True confession: I could never handle Robin Williams as an actor. Occasionally, he was fine (as in “Good Will Hunting”), but to me the electric zip of his mind was something he could never totally camouflage, even when he was just standing still; that’s why I couldn’t buy his pensive period demeanor in “Dead Poets Society,” or his calm compassion in “Awakenings.” (In “Mrs. Doubtfire,” on the other hand, he was inspired.) So I was glad that “Come Inside My Mind” spares us a logy film-by-film analysis of Williams’ big-screen resumé. His “straight” Hollywood career was a kind of fluke; his comedy remained the soul of who he was.

Williams’ heart attack is chronicled in disquieting detail, but does the movie deal with the complex circumstances that led to his suicide? Not really. Associates from Bobcat Goldthwaite to Williams’ close friend Billy Crystal offer versions of the same tidbits that don’t entirely add up: the diagnosis of Parkinson’s disease, the speculation about drugs he was on for that condition and how they may have affected him, a dropped hint from Goldthwaite about his possible suffering from a form of dementia. But it’s all vague, and none of it begins to explain how Robin Williams, whose comedy was one of the great life forces of our entertainment culture, wound up drained of that force. It happened, and it was tragic beyond words. But it’s the one place where “Come Inside My Mind” leaves you outside his mind.