OperaVision and the Royal Opera House are delighted to announce what Wagner called 'The opera of all operas'. Join us tonight at 20h00 CET to watch Kasper Holten’s acclaimed production of Don Giovanni, LIVE from Covent Garden.
With dazzling use of video projection, Holten and his creative team have created a dizzyingly beautiful world – a labyrinth in which Don Giovanni addles his conquests and a backdrop in which the villain is ultimately ensnared by his own destructive nature 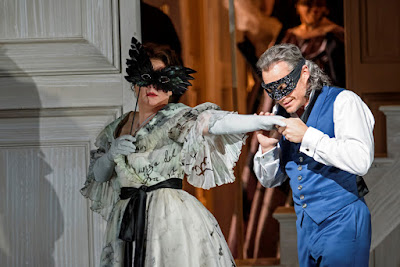 Don Giovanni
Mozart
Location:      Royal Opera House Covent Garden                   Date:  12 July 2018 at 20:00 CET LIVE
In Mozart’s masterpiece, we have the story of the last hours of a serial womaniser – the man who has seduced 2065 women throughout his life to date. In Mozart’s hands, we are beguiled by the villain’s wonderful tunes and repulsed by the catalogue of destruction his behaviour engenders. It is the father of one of his conquests who forces Don Giovanni to confront his ultimate fate.
Sung in Italian
Live subtitled in English with French and German to follow along with possibility of auto-translation into 114 other languages.

The cast of Don Giovanni talk about their roles and their experience on set.

Don Giovanni, a Spanish nobleman, is renowned throughout Europe as a seducer of women. The father of one of his conquests will force him to confront his ultimate fate...