A showcase of Howard’s work from the 1960s through the ’80s illustrates major shifts in consumer behavior and records an art career that no longer exists today.
Kealey Boyd 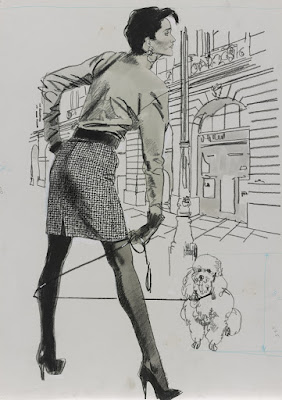 Jim Howard, “Drawing” (circa 1982), charcoal pencil on paper (all images courtesy the artist)

DENVER — Department stores transformed the appearance of US newspapers through advertisements starting in the late 19th century, introducing drawings to fresh layouts and pioneering new typography. The ads, more so than the products themselves, made store brands visually identifiable. Fashion illustration was preferred over photography in these campaigns through the 1980s, and illustrator Jim Howard was one of its pioneers. He is, among other things, credited with the stylistic shift from gestural renderings, common before 1960, to realistic narrative scenes. Drawn to Glamour: Fashion Illustrations by Jim Howard at the Denver Art Museum presents Howard as a fascinating case study of art’s intersection with commerce during the golden age of fashion illustration, echoing major shifts in consumer behavior and recording an art career that doesn’t exist today. 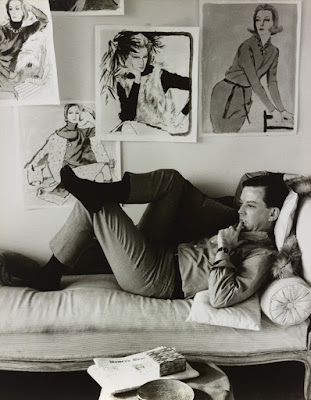 While in junior college, Howard took a job dressing windows and drawing advertisements at Goodfriends, a fashion store in Austin, Texas. Eventually, his portfolio took him to Neiman Marcus in Dallas in 1957, the most important department store in the US at the time. He joined a team of seven illustrators who saw the garment as a pathway to an aspirational lifestyle. “When Jim worked at Neiman Marcus his main goal was to reflect, through drawing, the department store as a temple of luxury. In the 1950s, department stores were competing with the couture houses, they were trying to be as sophisticated as the salons of the great designers,” the exhibition curator Florence Müller stated in an interview with Hyperallergic.

The architecturally interesting buildings with a range of services were a subsidiary attraction to the fashion, but contributed to an overall experience that an economically diverse audience of customers arguably sought. “Historically, the department store was the first place where you could touch without an obligation to buy. You could walk in and ask to see something or try it on. These stores were the democratization of fashion and access. Previously, you had to have a project for someone to attend to you,” noted Müller.

Howard’s 1960 drawing of a yellow dress as a static portrait in a gestural style was typical of its time. Although Howard did not introduce the idea of background to fashion illustration, he was the first to move toward a realistic scene, producing an image akin to a single frame of a film, such as the illustration of a chic woman distracted by the fashions in the store window while walking her dog. Entangled by the leash, she remains stylishly posed for the reader to complete the story. As the borders blurred between casual and formal wear in the 1950s, Howard’s narratives had a greater influence over customers, instructing them to wear a trending safari jacket or gypsy dress.

Howard’s compositions are marked by theatrical up-lighting, drawn as if a spotlight shone up toward the face from below. This effect made even a casual beach scene seem extraordinary, an experience the stores wanted to identify with their brand. Müller noted that when Howard left Neiman Marcus in 1961, he was sought out by Bonwit Teller, Marshall Field’s, Bon Marche, and others, “the same way a famous photographer like Peter Lindbergh is desired,” to have his signature style.

An executive training course transcript from Higbee Co. in 1938 states, “feel her wants, her doubts … encourage her to have courage to dress better or create a lovelier home for herself.” Department stores saw their primary customers as women and wanted to understand their perspective. It is a concept Jim Howard, now 88 years old, reiterated in an interview with Hyperallergic: “an illustration allows a woman to see herself in the clothes, while a photo of a supermodel or celebrity does not.”

Howard’s illustrations present impossibly lean and long figures, raising the question to what extent illustrators played in driving or reflecting beauty standards. “It is a constant topic in the history of fashion illustration,” notes Müller. “First of all, it is drawing, not reality. Artistic composition is something that reflects the taste of the artist and the time. Look at the first fashion magazine, Mecure galant, published in 17th-century France. It followed the trends of Louis XIV with some fashion plates and text; already there was an elongated ideal image.” 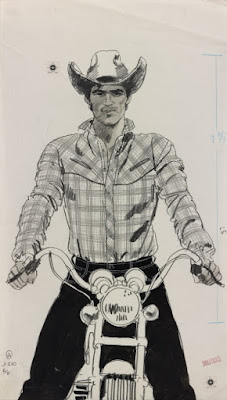 With 100 works from 1950 to 1990 on display, there is a remarkable absence of models of color — not every customer was invited to taste the life of luxury. Howard conceded that illustrations with brunettes would often be sent back to be made blonde, but recalled being the first to illustrate black and Hispanic women for Bonwit Teller, though these drawings are not included in the exhibition.

Drawn to Glamour offers fascinating insight into how drawings conjured a desire in consumers to experience something conveniently for sale. Although the exhibition reveals drastic changes in commercial image-making in the last 50 years, it makes it nonetheless obvious that the people occupying those images and runways remain static.