Swedish director Ruben Östlund’s satire The Square follows the misadventures of the chief curator of a fictional contemporary art museum.
Craig Hubert
Christian seems to have it all. Slim and well groomed in the way of a Zara mannequin, he has blindly absorbed all of the vanity attached to his position as the chief curator of the X-Royal Museum, a fictional contemporary art institution in Stockholm that forms the setting of Ruben Östlund’s The Square. His main focus as the film begins is the promotion of the installation of the film’s title, an illuminated square carved into the cobblestone meant to symbolize “a sanctuary of trust and caring.” If you stand inside and ask for help, there is an implicit contract that says somebody must respond.

But just outside the square, homeless people spend their days begging for change and being ignored. Christian (Claes Bang) walks past them on his way to work with the casual stroll of urbane privilege. Except, one morning, he is confronted. A woman screams, loudly, but is ignored. Christian, along with another passerby, quickly find themselves in the middle of the situation. After breaking up the fight, the two men congratulate themselves, adrenaline pumping through their bodies. They are like children who just scored a touchdown, high-fiving and chest-bumping each other in the street.

Christian walks away, pleased with himself. But soon he discovers that his phone was stolen. It was all a ruse, he thinks; his masculinity is deflated. With the help of a young museum staffer, they track the phone to a nearby apartment block and set off on a reckless scheme to retrieve the stolen property as if they’re in a heist film, complete with a bass-thumping soundtrack to guide their way. 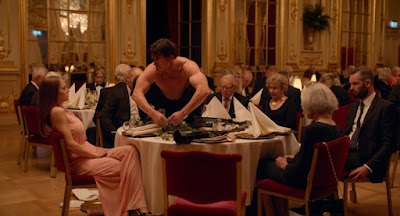 A scene from The Square, a Magnolia Pictures release

These moments often shift from the surreal to a grounded absurdity, as in a sequence where Christian goes home with Anne, an American journalist (played by Elizabeth Moss). When they arrive at her apartment, she has a pet monkey, it seems, as a roommate. Or the growling sounds you hear at different times in the background, coming from a large-scale video installation of Oleg, the performance artist, in close-up. The silliness is often in conflict with the way Östlund uses his camera, with precise framings that cause uneasiness.

But these undoubtedly feel like scenes that exist on the edges of what is happening with Christian’s personal turmoil. As much as The Square enjoys poking fun at the buffoonery of the art world, it’s more interested in what that world represents: a self-sustaining bubble where money, power, and posturing commingle — a placeholder for capitalist society writ large. What this creates is a world that runs on a series of contradictions. How can you promote progressive ideals in art but not acknowledge the suffering that is happening right outside your door?

Christian’s plan to find his stolen phone ends up implicating an enraged kid, who in turn begins to track him down, even showing up at his apartment. Incessantly, the kid asks for him to talk to his parents to get him out of trouble. But Christian won’t back down; he refuses to admit that his motives were wrongheaded. There is an exhausting repetition to these scenes that play out, over and over, in the same way. Christian, too scared to admit his faults, doubles down on his delusions. He did the right thing; he is a good person; he bears no prejudice.
Finally, there seems to be something like a breakthrough, a cathartic moment. After a forced change of heart, Christian attempts to reach out to the kid’s parents. He leaves a video message, tangentially admitting that he was at fault. But he can’t help mentioning that he is not totally at fault—these problems are structural, you see, and anyway, he happens to know a lot of wealthy people, some of the wealthiest in the country. They could fix everything. It’s such a palm-to-the-face moment, so insensitive in its pretense, that you almost feel sorry for Christian. He’s truly incapable of seeing himself, so blind to his own narcissism. After losing everything, he still can’t let go of his self-image.

Where Östlund arrives in The Square is a pessimistic view of human self-reflection: we can’t let go of ourselves to help others in need; we masquerade as caring people but it’s always through the lens of self-interest. We can create “The Square,” understand it and praise its value. But when it comes time to act on those same values, our human instincts get in the way.