TRAGEDY AND THE WILL TO LIVE: THE OBSESSIVE ART OF CHARLOTTE SALOMON

By CATH POUND
The details of Charlotte Salomon’s extraordinary life tend to overshadow her work. Often likened to Anne Frank, the Jewish artist was shaped by the Nazis’ rise to power and by a suppressed family history of suicide, before her life was cut short at Auschwitz in 1943. She has inspired plays, an opera, a movie and an award-winning French novel, and is the subject of a forthcoming animated film.
That Salomon’s art has so far remained little known is something the Jewish Historical Museum in Amsterdam is hoping to change by showing the artist’s legacy work, “Life? or Theater?,” comprising almost 800 gouache paintings, accompanying texts and musical references, in its entirety for the first time. 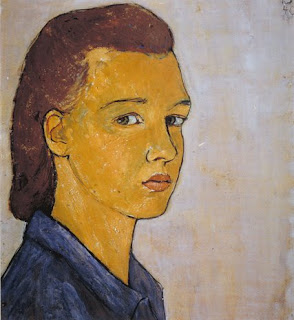 In a frenzy of creative activity, Charlotte Salomon painted almost 1,400 gouache works from 1940 to 1943, including this self-portrait. Credit Joods Historisch Museum

“Life? or Theater?,” a semi-autobiographical series, is one of the most fascinating and indefinable artworks of the 20th century. It blends fact and fiction with a dizzying array of visual references, including German Expressionism and Weimar cinema, to give a unique analysis of Salomon’s troubled family history and the experiences of Jews in Nazi Germany.

Conjuring scenes from her past and from her imagination, Salomon employed a vast visual repertoire to create images that recall Chagall, Munch and Modigliani, while also using cinematic techniques such as flashbacks and split screens. She then numbered and edited the paintings into what she referred to as a Singspiel, an old-fashioned popular form of opera…………..