AN ART NOUVEAU INTERPRETATION OF THE MINOAN WORLD

Restoring the Minoans: Elizabeth Price and Sir Arthur Evans at the Institute for the Study of the Ancient World revisits the archaeology of Knossos through a contemporary video installation.
Allison Meier 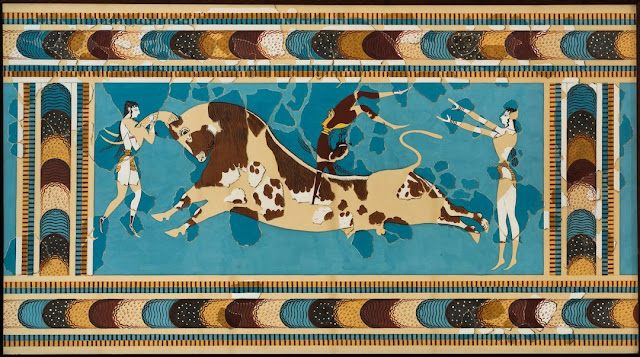 Émile Gilliéron père or fils, “Acrobats Leaping over a Bull” (20th century, before 1914), watercolor on paper, after a fresco from the Court of the Stone Spout, Knossos (courtesy Harvard Art Museums, Arthur M. Sackler Museum, gift of Mrs. Schuyler Van Rensselaer. image © Institute for the Study of the Ancient World, photo by Steve Gyurina)

One of the first objects that visitors encounter in Restoring the Minoans: Elizabeth Price and Sir Arthur Evans at the Institute for the Study of the Ancient World (ISAW) in Manhattan is a forgery. Anointed “Our Lady of the Sports,” the ivory and gold statuette of a bare-chested Minoan goddess raises her arms skyward, recalling the poses of the Snake Goddesses excavated at Knossos. In the early 20th century, Minoan fakes, sometimes fabricated by the same people carrying out archaeological restorations in Crete, appeared on the market for museum and private collectors. Although their authenticity has since been questioned, at the time they were just part of a blurring between past and present, between the authentic and the artificial. It was all fueled by one archaeologist’s passion to reconstruct a civilization from its ruins. 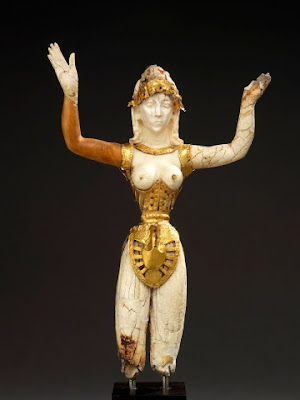 “Statuette of a Minoan Goddess (Our Lady of the Sports)” (Probably early 20th century), ivory and gold, Crete (?) (courtesy Royal Ontario Museum, Toronto, with permission of the Royal Ontario Museum, © ROM)
Restoring the Minoans focuses on two attempts to rebuild the past from the perspective of the present, each given one gallery at ISAW. One is the work of Sir Arthur Evans, who began excavation of Knossos on the island of Crete in 1900; the other is British artist Elizabeth Price’s two-channel video installation, “A Restoration.” The 2016 piece was made the Turner Prize-winning artist as a Contemporary Art Society commission based on collections at Oxford University’s Ashmolean Museum (where Evans was keeper) and Pitt Rivers Museum. It draws on Evans’s archives, particularly the gorgeous watercolors that artistically interpreted the fragments found at Knossos.

“He celebrated the distinctiveness of this civilization from other Bronze Age Aegean cultures, and influenced how we understand the Minoans through his excavations, curatorial projects, lectures, and extensive publications, but above all through his restorations at the ‘palace’ of Knossos,” writes Restoring the Minoans co-curator and ISAW Curatorial Assistant Rachel Herschman in the accompanying catalogue.

With its labyrinth of storerooms, and recurring depictions of bulls on exhumed engraved gems, gold work, and frescos, the Bronze Age complex struck Evans as archaeological evidence of the myth of King Minos and the Minotaur. Thus it was dubbed the Palace of Minos, never mind that this myth arose post-Bronze Age. Evans called his restoration efforts a “reconstitution,” and much of it was done with that most modernist of materials: concrete.

Workers rebuilt the Palace right on the Minoan ruins, some dating back to the second millennium BCE. The wealthy Evans owned the site in Greece, so his team had incredible freedom for this bold rebuild. A Swiss father-son team, both named Émile Gilliéron, painted enhanced copies of the surviving frescos, filling in any missing pieces. Several were installed on this fresh construction. The Gilliérons’ paintings have an Art Nouveau feel in their figures, colors, and motifs, as do the sculptural replicas. The catalogue for Restoring the Minoans contrasts a plaster reproduction of a Minoan Snake Goddess to a similarly lithe lady in a Henri de Toulouse-Lautrec lithograph. As Evelyn Waugh quipped in 1929, the Minoan restorers seemed to have “tempered their zeal for accurate reconstruction with a somewhat inappropriate predilection for the covers of Vogue.”

“I looked at these drawings and saw a complicated, febrile mix of different historical moments, and it was impossible for me in that moment to entirely disentangle them,” Price told co-curator and ISAW Exhibitions Director and Chief Curator Jennifer Chi in a catalogue interview……………..