AGAIN "MY" MODIGLIANI. SEE SOME OF THE MOST MEMORABLE ART OF THE 20TH CENTURY AT TATE MODERN’S . TATE MODERN COMPREHENSIVE RETROSPECTIVE OF MODIGLIANI’S WORK 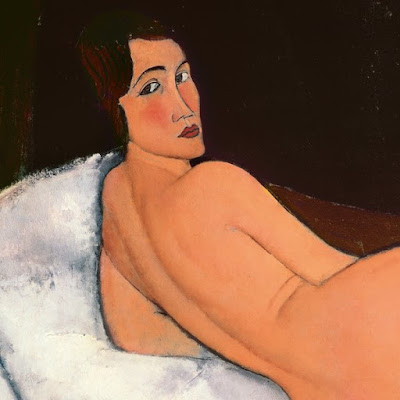 During his brief and turbulent life Modigliani developed a unique and instantly recognisable pictorial style. Though meeting little success during their time, his emotionally intense portraits and seductive nudes are now among the best-loved paintings of the 20th century.

Modigliani’s nudes are a highlight of the exhibition – with 12 nudes on display, this is the largest group ever reunited in the UK. These sensuous works proved controversial when they were first shown in 1917, leading police to censor his only ever solo exhibition on the grounds of indecency.

You will also discover his lesser-known but radical and thought-provoking sculptures, as well as his portraits of his friends, lovers and supporters, including Pablo Picasso, Constantin Brancusi and his partner Jeanne Hébuterne.

Thanks to a pioneering partnership with HTC Vive, the exhibition also transports visitors to the heart of early 20th century Paris using the latest virtual reality technology.

The experience is a recreation of Modigliani’s final studio, which uses the actual studio space as a template.