Specialist Matilda Burn tells the story of the French factory founded over 250 years ago, from the evolution of its beautiful wares to the monarchs who waited years for their commissions to be created. Illustrated with pieces offered at Christie’s
In the 18th century, porcelain was one of the most highly prized commodities in the world. Only the very wealthy could afford objects made of this fragile material, which was shipped at great expense from the Far East. 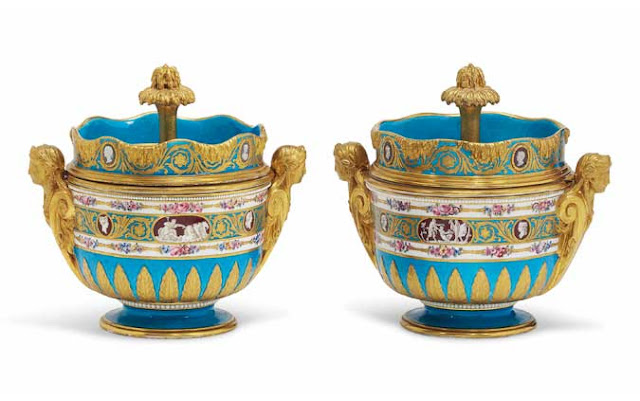 Porcelain was developed in China around 2,000 years ago but the recipe was a closely guarded secret. It was not until the early 18th century that Johann Friedrich Böttger discovered the magic formula for making true hard-paste porcelain, and in 1710 the Meissen factory was established.

Although the first ‘true’ porcelain in Europe was made by Böttger in what is now Germany, the French were swift to follow the lead from Dresden. Soft paste porcelain was produced at Chantilly, St Cloud and at Vincennes from 1738.

From the beginning the Vincennes factory enjoyed a privileged status as Manufacture royale  among the porcelain factories, with royal patronage and financial support from King Louis XV and Madame de Pompadour. By 1756 the Vincennes premises were considered too cramped and a new factory was built on the edge of the village of Sèvres, where technical developments and artistic achievements continued apace.

A Vincennes baluster pot and a cover (pot ‘à bouillon’ or ‘marmite’), circa 1746-49, the contemporary cover possibly matched. 12.7 cm (5 in) high. Sold for £50,000 on 25 November 2014 at Christie’s in London
Some of the early French porcelain had an imitative nature. The above Vincennes pot and cover emulates the shape and decoration of early Meissen pieces painted with harbour scenes. However, Sèvres quickly began to distance itself from its German competitor, and by the 1750s had developed forms and decoration uniquely its own…………..