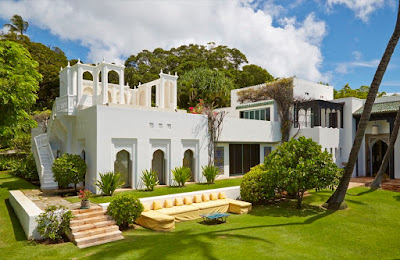 Mughal Suite exterior. © 2014 Linny Morris. Courtesy of the Doris Duke Foundation for Islamic Art.
In 1935, Mahatma Gandhi introduced American philanthropist and socialite Doris Duke to new ideas on craft. The daughter and heiress of tobacco magnate James Buchanan Duke was on her honeymoon—a mere ten-month jaunt around the world—with her new husband, James Cromwell, and she waited days to see the famed ascetic at his Central Indian ashram. Gandhi was emaciated at the time, in the middle of a long fast. According to Sallie Bingham, whose biography of Duke, The Silver Swan: Searching for Doris Duke, comes out with Farrar, Straus and Giroux next summer, “he was not very eager to see them because he was besieged by American millionaires. I’m sure he didn’t feel it was part of his spiritual calling to entertain them.” In addition to promoting Indian independence from British rule, Gandhi was also advocating a revival of national crafts as a solution to the country’s mass poverty.
Cromwell spent the visit discussing American politics and the idea of the gold standard, while Duke internalized new ideas about craftsmanship. Unfortunately, she didn’t get the chance to hash these out with Gandhi. Cromwell was the more outspoken of the pair. “I don’t know that Doris ever got two words in,” Bingham suggests. “One of the reasons I think she had to divorce Jimmy was that he was just so overpoweringly vocal.”
Their acrimonious divorce was finalized in 1943, but the sights seen and lessons learned on the honeymoon impacted the rest of Duke’s life. A passion for Islamic art and craft stemmed from her travels in the Middle East, as well as South and Southeast Asia, and she acquired new pieces until 1992, the year before she died.
At a time when rebellions against imperial conquests were just setting the stage for our contemporary debates about cultural appropriation and human rights in the post-colonial world, Duke was becoming enamored with art from the region that, in the West at the time, was understood as “the Orient.” Hawaii, where Duke and Cromwell made their final honeymoon stop, was also undergoing a major change at the hands of a larger power. American corporations were infiltrating the islands, which remained an American territory from 1898 until Hawaii’s 1959 admission into statehood. Pineapple and sandalwood businesses had been buying up land for years, forever altering the landscape and economy. 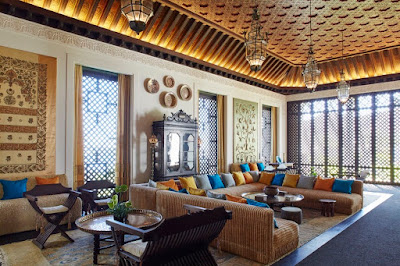 Duke so loved Hawaii that instead of returning to Palm Beach, Florida, where she’d planned to build her vacation home, she decided to erect a residence in Honolulu. Here, she wanted to showcase her newfound love of Islamic art and architecture. The home, which she called Shangri La (perhaps after a mythical valley in the 1933 James Hilton novel Lost Horizon, later adapted for a 1937 Frank Capra-directed film), has been preserved and now operates as the Shangri La Museum of Islamic Art, Culture, and Design.
Its executive director, Konrad Ng, formerly of the Smithsonian Asian Pacific American Center in Washington, D.C., explains how native Hawaiian families welcomed Duke, inspiring her to stay. “I think she felt a comfort in which she could be herself,” Ng says. “She’d be able to participate in fun things without the kind of judgments of society.” Duke hired Marion Sims Wyeth as her architect, and construction on Shangri La began in 1936……………..