HOW TROMPE-L’OEIL ADDED INFORMATION AND ORNAMENTATION TO MAPS 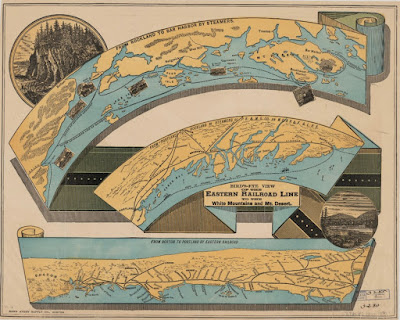 Cartographers have often added ornamental flourishes to their maps, whether sea monsters in the Medieval and Renaissance eras that attempted to describe ocean life, or octopi in more modern maps that suggested a spreading evil. In the 18th century, philosophers were considering the connection between sight and touch, an idea that made its way into the world of mapmaking. Look But Don’t Touch: Tactile Illusions on Maps from the Harvard Map Collection explores this emergence of illusions on cartography.

Look But Don’t Touch involves both an extensive online exhibition, and a display at the Map Collection in Harvard University’s Pusey Library. David Weimer, librarian for cartographic collections and learning at the Map Collection, told Hyperallergic that the exhibition was inspired in part by his research on embossed atlases for the blind, which got him thinking about how cartographers expressed space as something visual.

“This exhibition is working backwards from that into some 18th-century philosophical debates about whether spatial knowledge — phenomena like size and depth — are fundamentally tactile or visual,” Weimer explained. “I had first noticed these illusions in 18th-century maps, which fit into this trajectory. But then I found way more than I expected back into the 16th century and well into the 20th.” 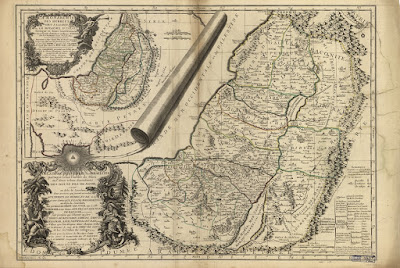 The objects range from 18th-century maps of England with illustrations that appear tacked on the page, to a 1777 plan of Boston that features a surveying compass that seems to rest on the paper. An 1890 “Bird’s-eye View of the Eastern Railroad Line to the White Mountains and Mt. Desert” is visualized like a single strip of paper, chronicling the path of the railroad and steamships between Boston and Bar Harbor, Maine, while Abraham Ortelius’s 1584 map from Theatrvm Orbis Terrarvm (1584) has the illusion of an older map by Paolo Giovio of Lake Como pinned on his newer atlas.

“As maps become commodities, they, of course, are trying to entice you to buy this map instead of that unadorned or less beautiful map,” Weimer stated. “But, as I hope you can see in this exhibition, they also help teach viewers how to understand the cartographic content and also try to justify the authority of the mapmakers themselves.”…………………….