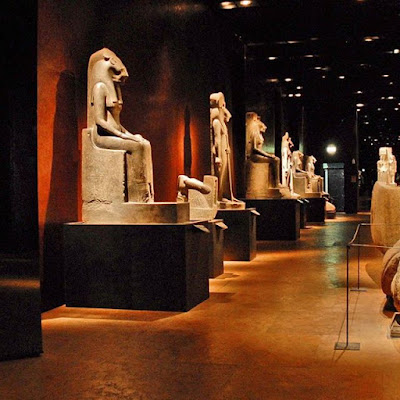 From 16 June 2017, the Manege of the Small Hermitage will be the setting for the exhibition “Nefertari and the Valley of the Queens. From the Museo Egizio, Turin” that has been organized by the State Hermitage and the Museo Egizio – the Egyptian Museum – in Turin with the support of the Lavazza company.
A separate entrance for the exhibition visitors will be provided on Tuesday and Saturdays from 18.15 till 21.00 through the Small Hermitage, from Shuvalovsky Proezd (37 Millionnaya Street). The entry ticket is 200 RUB for all visitors.

The exhibition is taking place within the framework of the Hermitage–Italy Foundation projects through the agency of Villaggio Globale International.

The Museo Egizio is known for having one of the most important collections of Egyptian antiquities outside of Egypt itself. The display is made up of five sections and includes 255 artefacts and photographs taken in the field that make it possible for visitors to picture the opening of the tomb of Queen Nefertari.

The formation of the collection of the Museo Egizio in Turin was the result of two events: the acquisition of the first Drovetti in 1824 by Charles Felix, Duke of Savoy and King of Sardinia, and the excavations conducted by the museum’s director, Ernesto Schiaparelli, in the early 20th century.

The collection assembled by Bernardino Michele Maria Drovetti was the source of most of the largest objects (statues and sarcophagi), as well as a large number of stelas, grave goods and an extremely rich range of papyruses, mainly from the region of Thebes. 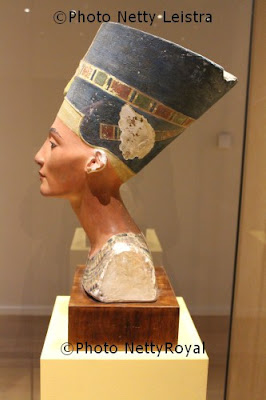 Schiaparelli worked to expand the museum’s stocks with the aim of turning it into one of the most respected Egyptian collections in the world. He acquired some 20,000 artefacts, initially from antiquaries in Cairo, and then from excavations in various parts of Egypt. From 1903 to 1929 he sent off archaeological expeditions led by members of his staff to various places in the Nile Valley, concentrating on sites that made it possible to fill chronological and typological gaps in the Turin collection. The activities of the Italian Archaeological Mission, headed by Schiaparelli, in 1903–05 represent an important stage in the history of the exploration of the Valley of the Queens.

The “Valley of the Queens” is a dried-up river mouth on the west bank at Thebes that was used for burials of members of the royal family and the Ancient Egyptian rulers’ entourage at the time of the New Kingdom (1550–1069 BC). Around 100 tombs were carved out there, mainly for queens and princes of the Ramesside period (19th and 20th dynasties, 1292–1077 BC). The tombs take the form of a succession of rectangular rooms leading to the burial chamber, where the body of the queen or prince was interred in a stone sarcophagus. The rich pictorial decoration on the walls of these tombs illustrates some of the stages in the deceased’s journey to eternal life and meeting with the gods.

Scholarly exploration of this important necropolis began in 1826 with the work done by the traveller and antiquarian Robert Hay. The second scholar to investigate the rock tombs of the necropolis was John Gardner Wilkinson, one of the British fathers of nascent Egyptology. We owe a systematic scientific study of the Valley of the Queens to the Franco-Tuscan expedition of 1828–29 led by Jean-François Champollion and Ippolito Rosellini. Notable excavations were conducted at the necropolis at different times by Karl Richard Lepsius (1842) and Heinrich Karl Brugsch (1854).

The results of the excavations in the Valley of the Queens (1903–05) and at Deir el-Medina (1905−08) turned the Turin museum into one of the finest collections of Theban materials and one of the most important centres for the study of Egyptian culture in the New Kingdom and the first millennium BC. Besides the discovery of the tomb of Queen Nefertari and the clearance of the tombs (previously known, but long hidden beneath rubble) of Queen Iset, the wife of Ramesses III, Queens Tyti and Sitre, and Prince Pareherwenemef, more than 80 other tombs and shafts were found. The important discoveries included previously unknown tombs of princes and dignitaries and large family burials for which older tombs had been re-used. 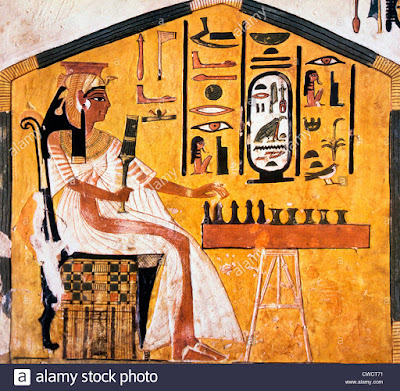 The display begins with a section devoted to Nefertari, the Great Royal Spouse of Ramesses II who was considered the living embodiment of the goddess Hathor, the wife of the sun-god. Monumental statues from ancient Thebes illustrate the functions of the king, who was not just ruler of the country, but also the intermediary between the people and the gods, and of his consort. Many items in this part of the exhibition illustrate the fusion of Nefertari’s image with a number of goddesses.

Particularly noteworthy are the items found in Queen Nefertari’s burial chamber and a model of the tomb that was made immediately after its discovery in 1904. Nefertari’s grave goods on show at the exhibition include fragments of the lid of the sarcophagus smashed by tomb-robbers, amulets, vessels, sandals woven from palm leaves that the Queen may have worn, and, of course, 34 wooden ushabti  finished with black paint that bear her name.

Elements of the decoration of the palace, ritual and everyday objects that belonged to noble ladies and were used at the royal court – statues and reliefs, toilet articles, cosmetic items and jewellery – paint a picture of court life and of the position that a woman occupied in Ancient Egypt in Nefertari’s time – the 19th Dynasty and the first 30 years of Ramesses II’s reign.

Some rare finds featured in the exhibition – a variety of decorative items, fragments of musical instruments, a wooden headrest to support the base of the skull when sleeping, vessels and bowls – give an idea of conditions in which the royal family and the nobility lived. 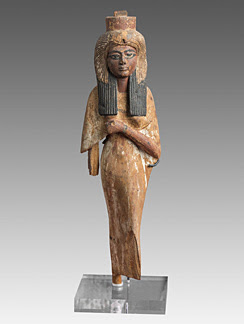 A separate part of the display is devoted to the labourers and craftsmen who were engaged in cutting out and decorating the majestic rock tombs of the kings and queens of Ancient Egypt in the New Kingdom. Finds from the settlement inhabited by craftsmen and artists in a hollow between the Theban mountains and the Qurnet Murai hill, at a site now known as Deir el-Medina, make up an important component of the Museo Egizio’s stocks. The daily existence and beliefs of the ordinary people of Ancient Egypt are covered in sections devoted to the labours, life and death of the craftsmen of Deir el-Medina.

The tombs created by the inhabitants of Deir el-Medina had a complicated fate. They were plundered, probably as early as the end of the New Kingdom, and some of them were used for later burials. For several centuries, the tombs of forgotten royal princes served as family vaults for the elite of Thebes. A number of sarcophagi found in the tombs of Khaemwaset and Seth-her-khopsef, two sons of Ramesses III (1198–1166 BC), that were used as burial vaults for a priestly family of the 25th Dynasty period (722–656 BC) complete the exhibition. Traces of fire on some of the sarcophagi may be related to plundering of the tombs. Christian monks are also known to have used ancient coffins as firewood.

The display is supplemented by richly illustrated funerary papyruses from the Drovetti collection that probably also come from the Theban necropolis. These papyruses are of the same age as the late sarcophagi and carry chapters from the Book of the Dead (a collection of utterances that enable the deceased to pass safely through the next world and unite with Osiris and the souls of the blessed) and the Amduat, an important funerary text that describes the nocturnal journey of the Sun and his victory over all the dangers. The deceased, identified with the Sun during this journey, overcomes his or her enemies and becomes immortal like the god Ra.