Swedish DJ Avicii, one of the world's biggest dance music stars, has died in Oman at the age of 28.
Avicii's club anthems include Wake Me Up, Levels, and recently, Lonely Together with Rita Ora.
His representative said in a statement: "It is with profound sorrow that we announce the loss of Tim Bergling, also known as Avicii.
"The family is devastated and we ask everyone to please respect their need for privacy in this difficult time."
No cause of death was announced, and Avicii's representative said no further statements would be issued. 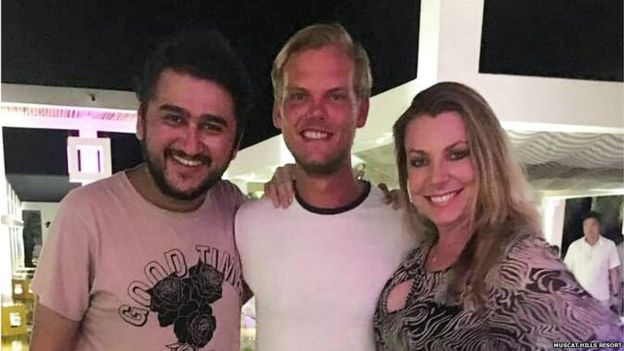 One of the last pictures of Avicii (centre), at a tourist resort near Muscat

The electronic dance music (EDM) star, who reportedly made $250,000 (£180,000) a night on tour, had struggled with some health issues in the past, having his gall bladder and appendix removed in 2014.
He announced his retirement from touring in 2016, partly because of the health problems.
"I know I am blessed to be able to travel all around the world and perform, but I have too little left for the life of a real person behind the artist," he said at the time.

One of the biggest names in dance music of the last 10 years, he had a catalogue full of pumping, uplifting, house smashes
He started his career when he won a production competition held by Pete Tong in 2008
He went on to notch up 11 billion streams on Spotify and was the first EDM DJ to stage a worldwide arena tour
He was nominated for two Grammy Awards and had nine UK top 10 singles, including two number ones
He suffered from health problems including acute pancreatitis, in part due to excessive drinking
He later announced a return to the studio, and released a new self-titled EP in 2017.
The EP, Avĩci (01), was nominated for a Billboard music award for top electronic album just days before his death.
As well as working with the likes of Aloe Blacc and Rita Ora, Avicii collaborated with artists including Madonna and Coldplay.
Former Radio 1 DJ Judge Jules, who often performed alongside him, said his biggest achievement was being the first electronic dance star to break America.
"He was the first huge commercial star," Judge Jules told the BBC. "He really became someone who couldn't go out on the street, he was so heavily recognised."
Other leading electronic artists wrote tributes to Bergling after the news of his death.