In 1898, Anna Klumpke painted a portrait of the French artist Rosa Bonheur. The partnership that followed shaped both their artistic legacies.
Karen Chernick 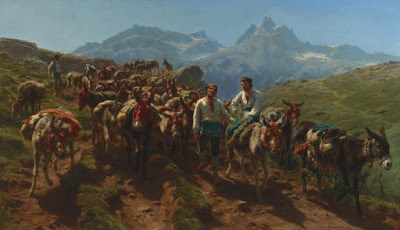 Rosa Bonheur, the 19th-century French artist whose paintings of animals made her internationally renowned, made many unconventional choices in her lifetime. She famously obtained a special permit to wear men’s clothing, supported herself with her art, and favored the companionship of women. She was an unwed spinster by traditional standards — but she considered herself twice married, at least in a spiritual sense, to women. Remarkably enough, each union began with a portrait.
Bonheur was a teenager when she met her first partner. In 1836, when she was 14, her father was commissioned to paint a portrait of a local girl, Nathalie Micas. Almost immediately, Bonheur and Micas felt a strong affection toward one another, and they eventually decided to spend their lives together. Micas supported Bonheur as she built her illustrious career, largely tending to household affairs so that Bonheur could focus on painting. Their partnership continued for 50 years, until 1889.

In June of that year, Micas died, and Bonheur was heartbroken. A few months passed before Bonheur met a young American portrait painter, Anna Klumpke. She was acting as an interpreter for an American businessman who had given Bonheur horses, one of her favorite subjects.
For Klumpke, meeting the artist was a childhood dream. After all, she grew up playing with a beloved Rosa Bonheur doll — a porcelain-faced model of the artist, popular in the United States during the mid-1800s — and Bonheur had unknowingly jump-started the American’s artistic career. Decades earlier, when Klumpke moved with her mother and three sisters to Paris, Bonheur’s “Plowing in the Nivernais” (1849) caught the budding artist’s eye in a museum, inspiring her to request permission to copy it in the galleries.
“How often I lingered before the picture,” Klumpke recalled toward the end of her life, in Memoirs of an Artist (1940). “Was it not, indeed, in copying that picture that there came to me a revelation of my artistic vocation? That picture became to me a talisman.” Klumpke sold her copy to a fellow American, for 1,000 francs, allowing her to completely cover her first year’s tuition at private Parisian art school, Académie Julian. (By comparison, Bonheur sold the original painting to the French government for 3,000 francs, after exhibiting it at the Paris Salon.)
After their first meeting, Bonheur and Klumpke remained pen-pals for almost a decade. Klumpke returned to the US, settling in Boston where she taught painting classes, exhibited her work, and received numerous portrait commissions, including one of suffragist Elizabeth Cady Stanton that hangs at the National Portrait Gallery. In her letters, Bonheur called Klumpke a “sister of the brush.” 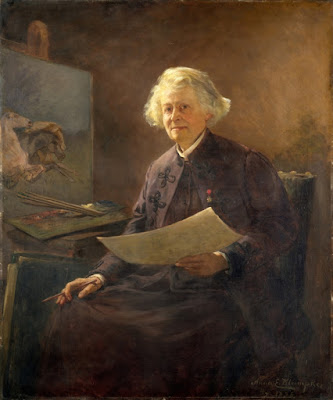 Anna Klumpke, “Portrait of Rosa Bonheur” (1898) in the collection of the Metropolitan Museum of Art (via Wikimedia)

Something changed in 1898, when Klumpke asked for permission to paint Bonheur’s portrait. Bonheur agreed to the request immediately, and an ecstatic Klumpke boarded a ship to Paris. She arrived at Bonheur’s home on June 11, 1898, and began painting the portrait five days later. Little did she know that the process would take months, with Bonheur deliberately withholding sittings to lengthen Klumpke’s stay………………