THE CASUAL COLONIALISM OF LARA CROFT AND INDIANA JONES

An anthropologist and a historian weigh in on the troubling genre of the archaeological adventure story.
Daniel A. Gross

The legendary director Steven Spielberg recently suggested that Indiana Jones, the rogue archaeologist who battles Nazis in Raiders of the Lost Ark, could perhaps return as a woman. “We’d have to change the name from Jones to Joan,” Spielberg reportedly told the British tabloid The Sun. “And there would be nothing wrong with that.” The fifth film in the series is currently slated for release in 2020, at which point longtime star Harrison Ford will be in his late 70s.

There is, of course, already a famous female character inspired by Indiana Jones. Just last month, Warner Bros. dug up the corpse of the Tomb Raider franchise with a film reboot starring Alicia Vikander, who plays the villain-vanquishing archaeologist Lara Croft. This time around, the film’s creators try to lend new meaning to their own awkward title. In the video game and 2001 film starring Angelina Jolie, Croft was herself raiding tombs — but this time, Croft and her father are trying to stop looters from robbing the cursed resting place of a Japanese queen. (A new game, Shadow of the Tomb Raider, is planned for September.) 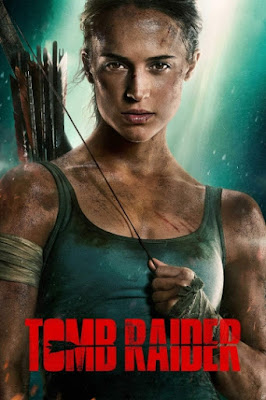 A film poster for the 2018 reboot of Tomb Raider (Warner Bros. Pictures)

Unfortunately, these new visions for Indiana Jones and Lara Croft, though perhaps more subtle than their predecessors, fail to rectify or even hide the casual colonialism of archaeological adventure stories. They still celebrate khaki-clad Western heroes, who trample precious sites as they reduce the study of other cultures to a grabby hunt for treasure. Other works in the same genre include Tintin in the Congo, Secret of the Incas, The Mummy, The Lost City of Z, and anything nice that has ever been said about Christopher Columbus.

The archaeological adventure story has had a considerable and troubling impact, according to Christopher Heaney, a Pennsylvania State University historian. “What we consume when we’re younger really, really shapes us, whether it’s Indiana Jones or Leakey digging up hominids,” he said. Although the character of Indiana Jones arguably raised the profile of archaeology as a whole, and Lara Croft could inspire young women to go into the field, both figures have little regard for the cultures whose histories they collect. “It still promotes a problematic smash-and-grab mentality to irreplaceable artifacts and lives,” Heaney said.

Archaeological adventures have almost always starred European or North American heroes, who tend to swoop into ancient sites to “explore” or steal from them. “In the beginning, it was represented in very colonialist terms, very racist terms,” Heaney said. The H. Rider Haggard novel King Solomon’s Mines, for example, caricatured “natives” as savage and primitive.
Real-life conflicts have often broken out between archaeologists and descendants of the communities they aim to study — for example between Hiram Bingham, an archaeologist who excavated Machu Picchu and helped inspire Indiana Jones, and Peruvians who were critical of his work. “Bingham was in real fights with the Peruvian government, and with local intellectuals, over the ownership of the artifacts,” Heaney said. Yet Bingham’s journey, with help from the National Geographic Society, was packaged as the greatest adventure story ever told.

The new film Tomb Raider doesn’t try to transcend what’s troubling about the genre. Though the story supposedly takes place on a Japanese island, the film seems totally uninterested in Japanese characters. Croft comes from an upper-class British family (hence her skills at archery, which serve her well later in the film). The action starts when Croft discovers a video left behind by her long-lost father, who warns of the cursed tomb and asks her to protect it by destroying documents. Instead, she goes looking for him, and ends up locked in a battle with a shadowy multinational organization that wants the tomb’s contents. Along the way, the film makes polite nods to Indiana Jones, from literal cliffhangers to a scene in which Croft plays “how low can you go” with spinning spiky cylinders. For comic relief, she also adopts a mantra: “At least we’re not dead yet.” (One imagines the franchise itself saying the same thing.)

Suzanne Pilaar Birch, a University of Georgia anthropologist, is similarly critical of the archaeological adventure genre. “It’s part of the colonialist tradition that reinforces the white heteropatriarchy, if you want to use jargon,” she said. Still, the genre’s enduring popularity doesn’t surprise her. “Maybe that’s the most realistic thing about the movie,” she pointed out. “Archaeology is still a very white discipline, and field archaeology is still very male.”

Some filmmakers make attempts to show that there’s a wrong way to do archaeology. Indiana Jones looks like a hero compared to everyone else in Raiders of the Lost Ark. “The bad guys are either Nazis or thuggy sacrificing cults,” Heaney said. Likewise, in the new Tomb Raider, Lara Croft and Lu Ren (her sidekick from Hong Kong) come across as downright enlightened compared to the corporate thugs they’re trying to thwart.

The problem is that these films rarely spend any time considering the actual cultures from which artifacts are stolen. Indiana Jones is supposedly a professor, but we almost never see him reading, writing, or speaking to the living descendants of the communities he supposedly studies. Artifacts that have cultural and spiritual value are described as either mysteries or priceless treasures: they exist to be solved or sold, instead of preserved as the tangible heritage of past generations. Perhaps the genre should instead feature figures, like Killmonger in Black Panther, who resist archaeologist-adventurers who have gone too far.
Heaney and Pilaar Birch both hope that, just maybe, that could happen one day. Pilaar Birch called for a widening of the lens used to depict the communities around archaeological digs: “to have a decolonized perspective, to have a cast that’s truly diverse.”

The structure of existing movies could prove useful, Heaney added. “You can flip it on its head, and use it to point out how it’s built on us-versus-them understandings of the world,” he said. Many films depict “haunted” or “cursed” sites. What if we take seriously the idea that our society needs to reckon with the ghosts of the past? Filmmakers could create villains who, working under the banner of anthropology, robbed the graves of indigenous people — or colonial-era settlers who murdered Native Americans.

What makes such movies unlikely, of course, is that they implicate all of us. Many of the world’s richest and most renowned museums are filled with artifacts seized during colonial conquest. The wealth of Europe and North America came, in part, from looted treasure — not only gold and diamonds, but also the human beings who were turned into commodities by the atrocities of slavery.

On the other hand, Heaney said, the real-life complexities and shortcomings of archaeology could make the genre a powerful tool. Perhaps it has potential to critique, rather than celebrate, the cult of the white and Western archaeologist-adventurer — and, in the process, to challenge the field to learn from its past. “It’s a good genre to think with,” Heaney said. “It’s a good mirror of the archaeological past that, I think, does inspire people to figure out how to make a better path for the discipline.”
https://hyperallergic.com/436285/casual-colonialism-lara-croft-indiana-jones/