PHOTOGRAPHS THAT CAPTURE THE LEGACY OF SOUL, FROM TINA TURNER TO AMY WINEHOUSE

By Rachel Lebowitz
In the late 1950s and early ’60s, soul—black music with elements of R&B, gospel, and blues—emerged in the American South and later burgeoned in Detroit, where pop-infused Motown hits took hold, as well as Chicago. Although male artists like James Brown first championed soul, women became a driving force of the genre, as legends like Etta James and Aretha Franklin rose to center stage. Soul music became a powerful vehicle to address social and political issues like civil rights and the Vietnam War, with which white soul singers like Dusty Springfield and Janis Joplin also engaged. Subsequent genres like disco and funk are indebted to soul, while artists such as Amy Winehouse, Erykah Badu, Adele, and Lauryn Hill represent the genre’s contemporary influence and endurance. Below are six photographers who immortalized the performances and personas of soul’s leading ladies. 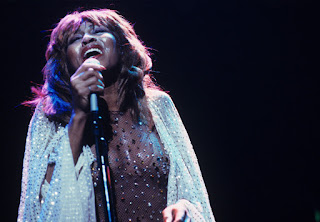 For over a decade beginning in the late 1960s, the Brussels-born Dutch photographer Gijsbert Hanekroot shot leading musicians—from Mick Jagger to Bob Marley—for the Dutch music magazine OOR. In images from the early ’70s, Tina Turner performs in Rotterdam during an era when she and Ike Turner were making soulful music together, churning out hits like their 1970 cover of John Fogerty’s “Proud Mary.” Shot from below, Turner appears larger than life as she performs with powerful, expressive energy. Although Hanekroot left music photography in the early 1980s to become a tech and publishing entrepreneur, he recently returned to his body of work, digitizing past images; publishing an art book, Abba…Zappa: Seventies Rock Photography, in 2008; and showing in Tokyo, Moscow, and across Western Europe.
Bronx-born Jerry Schatzberg was an instrumental American filmmaker in the ’70s, and his 1973 film Scarecrow, starring Al Pacino and Gene Hackman, earned him a Palme d’Or prize at the Cannes Film Festival. Before his film career began, Schatzberg shot fashion photographs that were published by the likes of Vogue and Glamour, as well as portraits of celebrities from Fidel Castro to Jimi Hendrix. In 1967, he captured Aretha Franklin in her mid-twenties. The close-up photograph shows Franklin, seemingly unaware of the camera, caught in the middle of singing with her earring frozen mid-swing. The image epitomizes Schatzberg’s intimate, lighthearted compositions, whose unusual angles and stolen moments place them more in step with Modernist photography than traditional celebrity snaps. 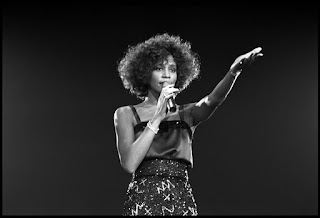 As a teenager, David Corio began photographing concerts in London, shooting artists like Elvis Costello. Later, the British photographer captured “High Priestess of Soul” Nina Simone, as well as soul and funk singer Lyn Collins (whom James Brown dubbed the “Female Preacher”) and Aretha Franklin. His black-and-white photos perfectly balance crisp dark tones with luminous highlights, resulting in images that are simple yet stunning. (Corio has stated that he prefers the medium to color photography for its “character” and drama.) Illustrative are his photographs of Whitney Houston from her 1988 concert at London’s Wembley Arena, soon after “Where Do Broken Hearts Go” shot to number one on the Billboard Hot 100 list—her seventh song in a row to do so. The images of Houston also hint at the singer’s genre-crossing career as she appears both sensual and bubbly, an embodiment of her trajectory from soul-infused R&B into ’80s pop……………..