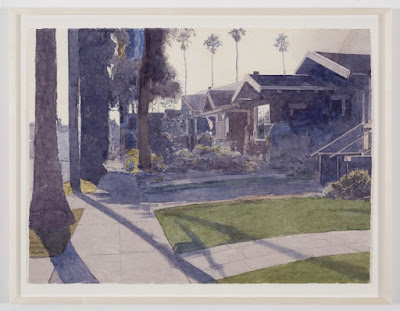 Alameda County is an island suburb split off from Oakland, California, by a channel. A brief online search reveals looming views of the city of San Francisco, bike paths, and very strict speed limits. It appears to be a quiet, verdant community. Not all of the scenes depicted in Robert Bechtle’s current exhibition at Gladstone 64 of recently completed pictures — which comprises two watercolors, one painting, and ten charcoal-on-paper drawings — are of Alameda, where Bechtle was a resident at one time, but four have its name in the title.

“Burbank Street, Alameda” (2015) for example, is a 22 by 30-inch watercolor, a dappled rendering of a drowsy California neighborhood in the late afternoon. In the foreground are patches of a carefully cropped, pea-green lawn. Left-of-center, a sidewalk leads off to a vanishing point. On the right, a row of modestly sized but undoubtedly pricy bungalows (houses of this type on Burbank Street go for around a million, in part due to an influx of high-tech workers) recede with it, as do the street-aligned columns of tall palms and telephone poles. Assorted hedges hug the properties. The angles of the regional architecture and the wriggle of greenery all but dissolve in the lengthening shadows, varied gradations of mauve, lilac and dark purple. Amid the dim lushness, close to the center point of the motif, Bechtle highlights a brightly lit American flag, limp on its pole. On one house nearer to the foreground, he exposes the sun’s glare on its picture window.
Bechtle’s known utilization of the photograph is still in evidence in this recent work, but there seems a greater emphasis here on the physicality of the objects depicted and the chosen medium, more than in the overall image — a development most evident in the carefully adjusted tonalities of the charcoal drawings, which are streetscapes as well. The automobile as stand-in for the human figure is a ubiquitous presence, as it has been throughout this artist’s career. A favorite subcategory is the car as a draped form or a mysterious body, as in “Covered Car, San Francisco” (2017), pinned between a foreground of lawn in bright sunshine and several garages behind it. Alluring tones articulate its clunky, sculptural, curved shape, which is cropped front and rear by the framing. “Santa Barbara Garage” (2017) features another recurring motif, the surveilled back ends of three automobiles sticking out at various lengths from the shadow thrown by the garage’s canopy.

I have long been attracted to Bechtle’s pictures as updated versions of one of the canonical beginnings of modern art: Delacroix’s “Les Femmes d’Algers dans leur Appartement” (“Women of Algiers,” 1834). This painting, similar but far superior to others of the 19th-century harem genre, was derived from the artist’s memory of being permitted to peer into the private chamber of kept Algerian women. Delacroix returned from the newly colonized Sultanate to Paris with various accoutrements of the seraglio: fabrics, slippers and perhaps the foregrounded hookah. Back in his studio, he brought in Parisian models as additional memory aids to realize it fully. 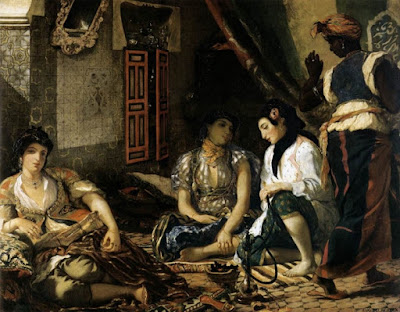 (That little poem of an interior, all silence and repose, crammed with rich stuffs and knick-knacks of the toilet, seems somehow to exhale the heady scent of a bordello which quickly enough guides our thoughts towards the fathomless limbo of sadness.)
Baudelaire appears intent on evaporating the fantasies of the 19th-century Parisian gent speculating upon the release he could experience within this small locked room. 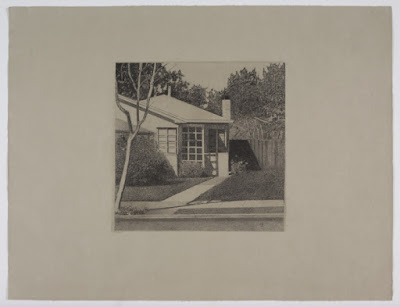 There are innumerable critical readings of “Les Femmes d’ Algers”: feminist, post-colonialist, Orientalist. It’s a masterpiece of ideological patriarchy in the service of imperialism. It has been enormously influential. Baudelaire understood how its complexity invites psychological, artistic and stylistic interpretations. Trace the penetration of the blazing, boring sun, the patterning on every architectural surface, the varied clothing, and privileged interior view to the Matisse of the Nice pictures, who appears intent upon de-mythologizing Delacroix’s tableau over and over, dismantling its mechanisms with a changing cast of curvy and blatantly erotic nudes, along with partially covered models and prim, fully dressed fashion plates, posing among fabrics, shawls, drapes, and costumes covered in Moroccan patterns, stripes of all kinds and on and on, as well as a host of secondary props that includes flowers, brass trays, birdcages, and various bric-a-brac.

Concentrate, above all, on in the trail of imagery that follows in the wake of “Les Femmes d’Algers”: powerful light illuminating a pregnant emptiness, this “silence and repose” translated into mid-afternoon anxiety, a “fathomless limbo of sadness.” Anita Brookner interprets Baudelaire’s analysis as dependent upon the condition of Original Sin and at the same time, of ennui, an inability to feel no matter what stimulus is present. I am sure that Matisse, as well as numerous other artists, had Baudelaire’s reading in the forefront of their minds. Delacroix’s private view of a harem evokes a relationship to the passage of time similar to that of a Parisian brothel, where privileged males went to remove themselves from incursions of business, family, and the workaday world. Picasso, in such works as “Les Demoiselles d’Avignon” (1907) idealized the brothel as a site, like the artist’s studio, where degradation and magic occurs. But Matisse’s Nice series, despite its abundance of sensual décor, communicates an exultant tedium, unlike Delacroix’s harem dwellers who were, in fact, on call, waiting in a perfumed vacuum.

Wayne Koestenbaum described the glacial pace of Andy Warhol’s films as being about the eroticism of time passing. To trace this thread to the present and this country, there is first Hopper, where one finds a deracinated private view where only the light and the lassitude remains, then California’s postwar painters, for a twinning of exoticism and banality that harkens back to the Delacroix work. Bechtle seems to reach back through the painterly Diebenkorn of the languorous model at mid-day and the Ruscha of the vacated swimming pool to find his own version of California light, transposing it into photographed glare, rendered. There’s a mercilessness, no matter what time of day is portrayed, that removes it from the noir-ish cinematic element he is often identified with, moving it closer to the mildest hint of despair. Still, his pictures are neutral enough to allow the viewer to note that there are, in fact, no empty moments, or rather, no more of them anymore. Absence, or maybe, closer, longueurs — the long, boring passages in a narrative as applied to quotidian existence — is a sentimental notion, or it has become commodified, in the sense that it is something to be consumed.

We now live an existence of round-the-clock communication and production: behind the facades of Bechtle’s houses, information on its occupants is being continually and quasi-voluntarily culled. Days do not begin or end; neither do markets or the news. Like the figures in “Les Femmes d’Algers,” the owners of Bechtle’s parked automobiles are always on call.

In Jonathan Crary’s book, 24/7: Late Capitalism and the Ends of Sleep (2013), about the phenomenon of “nonstop neo-liberal capitalism, where the subject becomes a victim of a dispossession of time, where an environment that is conducive to daydreaming or any kind of absent-minded introspection is incapacitated.” He quotes Hannah Arendt on what she called “the darkness of sheltered existence,” the necessity of entering a protected sphere of private life, away from the “implacable bright light of the constant presence of others.” Without this sphere, there can be no nurturing of the self that is not defined through acquisitiveness, and citizens would no longer be able to make a contribution to the common good.
At present then, Bechtle’s works are anachronistic: there is no longer such a thing as an empty moment. But according to Giorgio Agamben, the only vantage point from which to observe contemporaneity is from that of an anachronism.

This is perhaps where one can judge a work of art in its irony. Both Delacroix and Bechtle are representing an ethos, that is, something that an era believes, but not something that is necessarily true. In both cases, this belief suggests the possibility that one can escape to a private moment of freedom, and that it can be purchased. Like all good art, Bechtle’s work maintains the ability to instruct, because it somehow rings true. This is what appealed to Baudelaire about “Les Femmes d’Alger.” Though he admired Delacroix for his imagination, he responded to the reality of a situation that was present within the form of a harem fantasy. Some artists are porous, they cannot help but let in life when they work. This is how Delacroix differed from his contemporaries, stock Orientalists such as Gérôme.

Bechtle, also Ruscha and Diebenkorn, seem to be able to tell us something real about their subject matter, California, while others, such as Hockney and Theibaud, who occupy similar territory, never seem able to get outside of themselves. They proffer a California that is largely a projective fantasy, much like those 19th-century Orientalists did.