MARCH 10, 2018 – JULY 1, 2018
Following the success of the 2017 exhibition ‘Hyperrealism. 50 years of painting’, the Kunsthal Rotterdam crosses over to the third dimension with the exhibition ‘Hyperrealism Sculpture’. This exhibition will show a unique selection of three-dimensional works by all important hyperrealist sculptors of the past 50 years. From the early American pioneers, including George Segal, Duane Hanson and John DeAndrea, to the rise of the international movement, represented by Juan Muñoz (Spain), Maurizio Cattelan (Italy), Berlinde de Bruyckere (Belgium) and Ron Mueck, Sam Jinks and Patricia Piccinini (Australia).
With 35 artworks by 28 artists, the Kunsthal will present - for the first time in the Netherlands - an overview of the worldwide developments in hyperrealist sculpture over the past fifty years. In the 1960s and 1970s a number of sculptors, each from their own perspective, became interested in a type of figurative art based on representations of the human figure that were as vivid and lifelike as possible. Standing face to face with these works provokes a reaction from the visitors, raising questions about the extent to which human beings can be manipulated and about identity in general. How do we see ourselves and others? – An interesting topic in the light of the current selfie culture on social media. 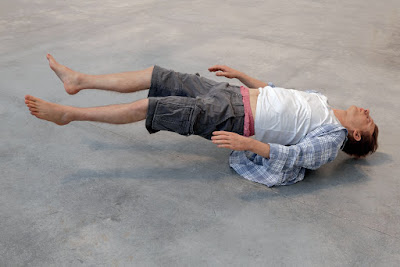 HUMAN REPLICAS
In five different themes, the exhibition will show how our perspective on the human body is subject to constant change. ‘Doppelgangers’ zooms in on artists such as Duane Hanson and John DeAndrea who, in the 1960s, set the trend by making life-sized sculptures. To make the sculptures even more lifelike, they used extremely laborious, complex procedures and innovative materials to meticulously replicate the structure of the human skin, and combined the works with objects from reality. Also shown are the hyperrealist nudes of the American artist Paul McCarthy and works by the French artist Daniel Firman, who, by contrast, fully dresses his figures and systematically conceals their facial features and limbs.

DIMENSIONS
From the 1990s a number of artists, including Ron Mueck, Marc Sijan and Sam Jinks, started to drastically enlarge or reduce the dimension of their figures. Ron Mueck uses this method to focus on the transitional stages of life, such as birth, old age and death. By depicting the human body in an alienating way, he makes these themes even more profound.
A spectacular example of this is the five meter long work ‘A Girl’ from 2006 (from the collection of the Scottish National Gallery of Modern Art), representing a new-born baby. 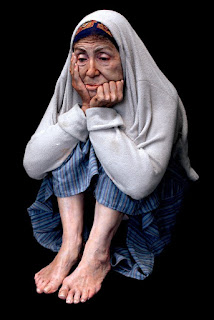 DEFORMED REALITIES
The theme ‘deformations’ zooms in on artists such as Evan Penny and Patricia Piccinini who observe the body from distorted perspectives,  Tony Matelli who, with his floating figure, seems to completely discard the laws of nature, and Berlinde de Bruyckere who explores themes like death and human existence with her sculptures of contorted bodies.

BODY PARTS
The theme ‘body parts’ shows the works of artists who, since the 1990s, have focused their attention on specific parts of the body. Maurizio Cattelan’s disconnected arms and Robert Gober’s apparently cleanly severed lower part of a hairy leg projecting from the wall, as well as the life-sized heads by John Davies and the almost surrealist human parts by Peter Land, all convey disturbing messages, occasionally with a touch of humour.