The Heron’s Tree is an urban garden designed as a 114-foot-tall, 165-feet-wide tree, poised to rise in the western French city of Nantes.
Claire Voon 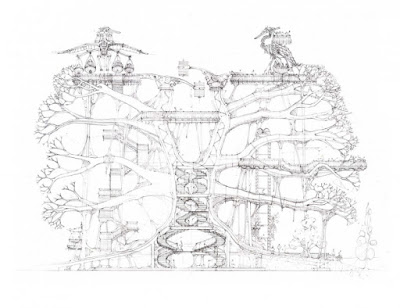 A French theatrical troupe
known for enacting dramatic performances with giant kinetic beasts, from spiders to dragon-horses, is working on its most ambitious piece of public art yet. The Heron’s Tree (l’Arbre aux Hérons) is an urban garden designed as a 114-foot-tall, 165-feet-wide tree, poised to rise in the western French city of Nantes. Comprised of winding steel paths punctuated by large automata of creatures, it is an extraordinary feat of fantastical architectural and interactive sculpture that recalls the Hanging Gardens of Babylon.

The team behind it, La Machine, is currently crowdfunding the project, spearheaded by its division known as Les Machines de l’île. The garden’s total cost is an incredible 35 million euros (~$42 million US), and while two-thirds are covered by subsidies from the city of Nantes and other public donors, Les Machines de l’île launched a Kickstarter on March 6 to try to raise as much money as possible.
The Heron’s Tree has long been a vision of La Machine, which produces all its creations entirely in its workshop. Since 2007, it has been developing a sculptural branch that it will replicate 22 times for the tree, to create a path for pedestrians decorated with vegetation. These are accessible through a double helix staircases, and are interspersed with footbridges and viewing stations that will offer a view from 100 feet above ground. At capacity, the Heron’s Tree is designed to welcome 300 people. 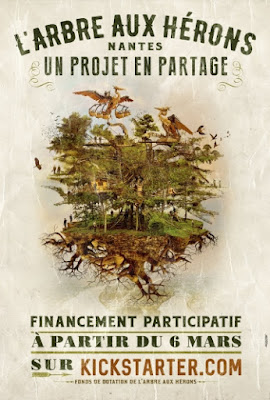 The team has also already built prototypes of the animals that visitors will encounter along their journey, from a caterpillar to an ant to a hummingbird. These have been on display in its in-house gallery, described as a “steampunk wonderland,” since February. The sculptural centerpieces, though, are two birds from which the project draws its name: giant, orbiting herons that offer passengers a ride through the air. An urban machine and mechanical bestiary, the final hanging garden will sort of look like New York’s High Line, but if Jules Verne and Leonardo da Vinci had a hand in its planning. (The art collective cites these inventors as sources of inspiration.)
If funding is secured, Les Machines de l’île plans for the project to be ready for visitors in 2022. Planned to sit on a granite quarry near the Loire river, the tree is envisioned as a way to attract tourists and help revitalize the neighborhood of Chantenay, a spokesperson told Hyperallergic.

The Heron’s Tree might seem like a pipe dream, but realizing complex, extravagant engineering is La Machine’s specialty. In 2007, it sent a mechanical pachyderm, carrying dozens of passengers, for a walk on Ile de Nantes; in 2012, it opened a massive carousel comprised of three tiers, featuring revolving marine creatures. Bordering on urban planning, this third project invites us to further imagine how strange encounters and enchantment can be introduced into our cities in bold form.