STOP TREATING THE BERKSHIRE MUSEUM AS A SACRED SPACE FOR MASTERPIECES

Locals like me don’t visit the Berkshire Museum to look at famous paintings. Why did 40 artworks become the center of a national controversy?
Christopher Marcisz 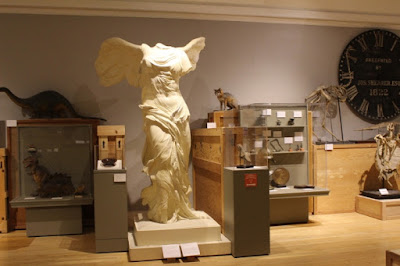 BERKSHIRE COUNTY, Mass. — Last week, after a drawn-out legal fiasco, a Massachusetts court finally granted the Berkshire Museum the right to auction a number of well-known artworks at Sotheby’s. The museum is now free to sell an initial batch of 13 works to fund a major reconfiguration of the museum, which plans to focus more on science and technology. (Already, the museum has sold Norman Rockwell’s painting “Shuffleton’s Barbershop” to the Lucas Museum of Narrative Art.)

Critics of the sale of these artworks — who mounted protests, penned open letters, and even secured intervention by the state’s attorney general — have tended to portray museum officials as traitors to the masterworks in their collection. One recent letter to the local newspaper declared: “To the Museum board, FOR SHAME for the opaque way in which you have treated the members of the Berkshire Museum.”

Although naysayers make a good point when they call out the museum’s opacity, national news coverage of the controversy tended to miss an important point. The Berkshire Museum is a very eccentric place. Its collection is ponderous, full of countless knick-knacks and few masterpieces. The museum is more popular with school kids than tourists, better known for its red-footed tortoise and life-sized stegosaurus sculpture than its arts programming.

Too often, those who fought the sale of 40 artworks also forgot that this is an institution stuck with an outdated, catch-all mission that never had the resources to sharpen or adjust its course. Even as other Berkshire museums became world-class destinations, it remained in need of a plan — yet it seems cursed by the one it finally chose.

As the proposed sale evolved into a national debate about museum administration ethics, I thought back on my own memories of the museum, which I’ve visited many times. For all the focus on the works of art threatened with sale, I have no memories of admiring them. I’ve never mused on the layers of perspective in “Shuffleton’s Barbershop,” or lost myself in one of Albert Bierstadt’s western landscapes. Every time I’ve been there, it has been with local schoolchildren, and there was always something else that caught their attention. In fact, the place didn’t really register as an art museum at all.

I asked Berkshire artist Dana Piazza, who grew up in the county and now lives and works locally, about his best memories of the museum. He said it was probably Wally, the life-sized stegosaurus model out front.

And did the art make an impression? “Honestly no, not really,” he said. “I probably went there on a couple of field trips, but I can’t say I have the same sort of experiences as I’ve had at Mass MoCA,” referring to the enormous contemporary art center in nearby North Adams. He took far more inspiration from Mass MoCA’s building full of Sol LeWitt wall works, which helped shape his own approach to conceptual drawing.

While the Berkshire Museum still is committed to local arts — Piazza raved about a recent retrospective of work by Berkshire-based artist Morgan Bulkeley — a trip to the tumble-down building can be disorienting. There are vintage dioramas of tundras and savannahs, case after case of decades-old stuffed birds, an arthouse cinema in the auditorium, an aquarium in the basement, and a geology exhibition that elucidates the difference between Greylock schist and Hoosac schist. 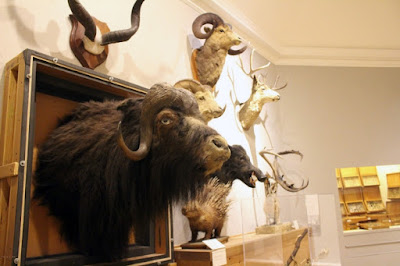 Taxidermy mammals hanging on the walls of the Berkshire Museum

The unusual scope of the museum was baked in from the start. It was founded in 1903 as a gift to the city by Zenas Crane, heir to a paper-making fortune. It reflects the best intentions, and the bafflingly broad interests, of an educated, turn-of-the-century regional oligarch. There is a Ptolemaic-era mummy (“Pahat”), Napoleon’s death mask, a few splinters and scraps of cloth from the Wright Brothers’ first airplane, and — seemingly by accident — many priceless Hudson River School paintings.

The Berkshire Museum in approximately 1911 (via Wikimedia)
The museum was always a point of civic pride for Pittsfield, an industrial boomtown home to a major division of General Electric. In 1950, the city was bigger than Orlando, but its prospects changed fast. When the city started to lose its prominence, the museum did too. The initial idea, that this was a place to preserve old stuff — a grandparent’s attic from the Gilded Age — now seems outdated.

I saw the museum through fresh eyes a few years ago, when I chaperoned a field trip for my daughter’s third grade class. The kids dutifully sat through a rather inexpensive-looking traveling photography exhibition about the American West. They perked up a bit in the permanent collection — the mounted head of the locally-famous moose Old Bill, some Civil War weaponry, a bark teepee. They really enjoyed the aquarium, the boa constrictor, and the poison dart frogs. I couldn’t say what they learned, really, but they had fun.

A taxidermy rabbit on display at the Berkshire Museum (via Flickr user Amy Meredith)
These days, museum officials talk about a “New Vision.” Their plan, I think, acknowledges that the Berkshires are unusually blessed with arts and culture. A focus on science and technology aligns with ambitions of the local political and business establishment: great hopes are placed in the so-called “Berkshire Innovation Center,” set to open in a disused portion of the GE complex, which would incubate advanced manufacturing technologies.

The negative narrative spun about the museum — that unscrupulous officials conspired to sell its greatest, most valuable works of art in the service of a sort of scientific theme park — almost inevitably provoked backlash. The debate spun out in to a national spectacle, and came to be shaped by observers outside the region who lacked much of a relationship with the actual museum.

The public was told to worry about the precedent that could be set for art museums; there were speculations about implausible options that only look sensible from a great distance, like the idea that Williams College would swoop in solve the problem, or the state would fund another contemporary art space like Mass MoCA. The worst takes oozed with contempt for the people that actually go the museum. The art critic of the Los Angeles Times wrote that he “grew up an hour down Route 20 from Pittsfield and was never much enamored of the place.” He added, “Here’s an idea: Don’t sell the art. Do close the museum.”

Don’t be distracted by the many commentators who ignore the actual experiences of museum-goers. The unfortunate truth is that “the people of the Berkshires” — so frequently invoked by both sides — just wanted an undramatic compromise, and a financially-stable museum that could still hold the attention of schoolchildren and perhaps find some kind of direction. Something between the piety of saving sacred objects, and the market-based Power Point logic of a financially-faltering museum.