Emmanuel Macron and his wife Brigitte landed in the United States on Monday for the French President's first official visit to the country.

They were met by a motorcade at Joint Base St Andrew's military airport in Maryland near the capital Washington DC. 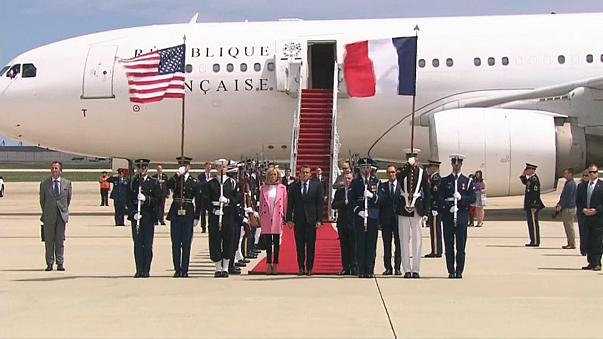 Watch as US President Donald Trump greets Macron and his wife Brigitte upon their arrival to the White House.
The three day visit's main topic of discussion is likely to be the Iran nuclear deal whith his counterpart Trump set to announce whether or not the U.S. will pull out of the agreement in coming weeks.

The deal to halt Tehran's nuclear weapons programme, formally know as the Joint Comprehensive Plan of Action (JCPOA), was signed in October 2015 by Iran, the EU, and the five permanent members of the UN Security Council.

Though Trump and Macron have enjoyed a good relationship so far tensions are expected.

While Trump promised to rip up the Iran agreement on his 2016 campaign trail Macron stressed earlier this week that "there is no Plan B" for the deal and that he will try to convince Trump to stay in it.

German Chancellor Angela Merkel is expected to take a similar line her own state visit to the U.S. later this week.