The museum wants to prevent the David from leaving Canada — but it may face a bidding war with other Canadian museums. 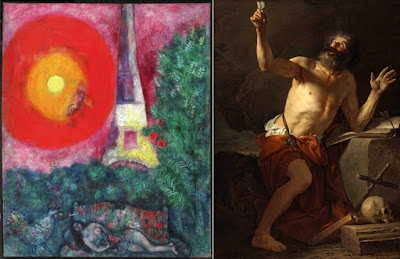 The National Gallery of Canada caused a ruckus earlier this month when it announced plans to sell one of its two Marc Chagall paintings to buy an artwork it would not identify, but described as a “national treasure” that would otherwise leave the country. Rumors about the mystery work were finally put to rest yesterday, after its owners gave the institution permission to name it: Jacques-Louis David’s 1779 “Saint Jerome Hears the Trumpet of the Last Judgment.” The museum’s director, Marc Mayer, said his institution’s collection of French art is remarkably comprehensive, with one “glaring exception” that this work would rectify.

The National Gallery of Canada (via Wikimedia)

“The National Gallery of Canada’s ardent goal since learning that David’s ‘Saint Jerome Hears the Trumpet of the Last Judgment’ was for sale has been to acquire the painting,” Mayer said in a statement. “Doing so would enhance the national collection dramatically — a collection that is made available to sister art museums across the country through our generous loan program. Of equal importance to the Gallery is that a work of this magnitude not leave Canada. That will continue to be our priority.”
The David, however, is also being eyed by two Quebec museums that hope to acquire the work through a joint bid. The Montreal Museum of Fine Arts and the Musée de la civilisation are currently seeking the necessary funds to buy the work together, and plan to share the painting, according to Ottawa Citizen. The latter has the first right of refusal until mid-June; Mayer said that the National Gallery did not know that the museum had an interest in purchasing the David.
The National Gallery’s Chagall, titled “The Eiffel Tower,” will be auctioned as the highlight of a Christie’s sale in New York on May 15, with an estimated value between $6 and $9 million US.
The David — which has roughly the same value as the Chagall — has been in Québec City since 1917, when its collectors, two French sisters, immigrated to the province. In 1938, it was donated it to its current owner, the parish of Notre-Dame de Québec. The church entrusted it to the Musée de la civilisation for safekeeping. Only in 1995 was it placed on public display — at the National Gallery, which requested it under a long-term loan. It remained on view in Ottowa until 2013, when the Musée de la civilisation requested its return.
Three years later, the parish decided to sell the painting and offered it to the Montreal Museum of Fine Arts, the National Gallery of Canada, and the Musée national des beaux-arts du Quebec. Since that time, the National Gallery has explored various options to finance the purchase, including support from private donors. Its price would have depleted the museum’s annual acquisition budge of $8 million C (~$6.3 million US).
In fall 2017, the National Gallery also learned that two foreign museums had expressed interest in acquiring the David, though it did not name them. “One of those museums told us they were indeed very interested in purchasing “Saint Jerome” and had the funds to do so,” Mayer said. “We then understood that the risk to Canada of losing this national treasure was real, adding urgency to the matter. We began to explore other options, such as selling a high-valuation work of art.”
The Gallery’s board voted in December 2017 to deaccession and sell “The Eiffel Tower,” which the museum purchased in 1956. (Before turning to Christie’s, the museum had attempted to sell the painting to over 150 art museums in Canada, none of which responded to the offer.) Its collection now represents Chagall with just one earlier work, “Memories of Childhood,” a painting Mayer described as “more appropriate in the context of our strong collection of modernist works.”
The Montreal Museum of Fine Arts and the Musée de la civilisation would have to match or exceed the National Gallery’s offer by mid-June to keep the painting in their province. But there’s yet another option on the table: last Thursday, the directors of the two Montreal museums told Ottawa Citizen that they are open to collaborating with the National Gallery to acquire the David.
A three-way share could perhaps settle this unique cultural tussle, though it doesn’t seem probable. Both museums said last week that the Gallery had not contacted either of them regarding the painting.
The National Gallery, meanwhile, has not been contacted by any potential partners. “It is rare for museums to partner on the purchase of works of art, since the logistics of co-ownership are very complicated and costly, including conservation, insurance and transportation. The National Gallery of Canada’s intent is to display the Saint Jerome, as we had done for 18 years,” said Christiane Vaillancourt, the Gallery’s director of communications.
What’s certain is that the National Gallery will give up its Chagall. Even if the Montreal museums are able to purchase “Saint Jerome,” the sale of “The Eiffel Tower” will proceed as per the rigorous deaccession process,” Mayer said.
“The proceeds from the sale will be used to improve the national collection and, especially, to strengthen Canada’s ability to protect its patrimony from exportation,” he said, “a challenge it will surely face again.”
https://hyperallergic.com/438297/national-gallery-canada-chagall-jacques-louis-david/?utm_medium=email&utm_campaign=April%2018%202018%20daily%20-%20Cashing%20In%20on%20Your%20White%20Privilege%20Tax%20Deduction&utm_content=April%2018%202018%20daily%20-%20Cashing%20In%20on%20Your%20White%20Privilege%20Tax%20Deduction+CID_0b6ff6c433fc1c9ca46c29dd480ce3f5&utm_source=HyperallergicNewsletter