BRITISH MUSEUM. RODIN AND THE ART OF ANCIENT GREECE 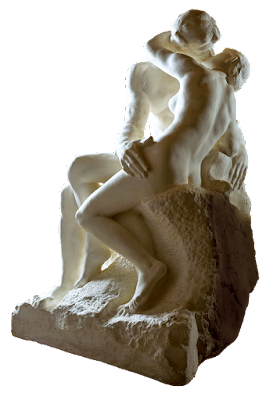 In 1881 the French sculptor Auguste Rodin visited London for the first time. On a trip to the British Museum, he saw the Parthenon sculptures and was instantly captivated by the beauty of these ancient Greek masterpieces.
Like many archaeological ruins, the Parthenon sculptures had been broken and weathered over centuries, but Rodin took inspiration from the powerful expression that they conveyed through the body alone. He even removed the heads and limbs from his own figures to make them closer to the broken relics of the past. By doing so, he created a new genre of contemporary art – the headless, limbless torso.
A hundred years after his death, see a selection of Rodin’s works – including his iconic sculptures The Thinker and The Kiss – in a new light. This major exhibition will feature original plaster, bronze and marble examples of many of Rodin’s sculptures on loan from the Musée Rodin in Paris. For the first time, they will be shown alongside some of the Parthenon sculptures that the artist so admired, as well as selected objects from his own collection of antiquities.
Experience the magnificent sculpture of a modern master, and explore how the ancient world shaped his artistic vision.
Both artists were the most famous sculptors of their lifetimes. Despite living centuries apart, Rodin wrote and spoke as if he knew Pheidias personally. Seeing his hand at work in the sculptures of the Parthenon, Rodin imagined Pheidias as a friend and teacher who guided his hand as he created representations of the human form.
No artist will ever surpass Pheidias… The greatest of the sculptors, who appeared at the time when the entire human dream could be contained in the pediment of a temple, will never be equalled.

Like Pheidias, Rodin did not personally carve everything that we put his name to. Rodin was sometimes seen posing for the camera with hammer and chisel in hand, but he did not carve in marble himself. He preferred to model figures in clay, and then have them cast in plaster or bronze. If he was working in marble, he would delegate the task of copying the clay model to a stone carver under his personal control. In this, his practice may not have been very different from that of Pheidias. It is most unlikely that Pheidias would have carved any part of the architectural sculpture of the Parthenon, but he very probably designed it, fashioning models and making drawings for the pediment and frieze.
Sometimes we can see Rodin’s admiration for Pheidias at work in compositions that have not always been acknowledged. One such example is the comparison between the pose of a figure in the cavalcade of the Parthenon frieze and Rodin’s The Age of Bronze.
In The Kiss, the sculpture transcended its original purpose to become representative both of Rodin’s own works and of a new naturalism in the history of art. The Kiss has almost become a cliché demonstrating how great works of art become overfamiliar. But by placing The Kiss together with these figures (below, likely of goddesses) from the east pediment of the Parthenon, we see almost for the first time the miraculous ability of both Rodin and Pheidias to conjure warm flesh out of cold marble. 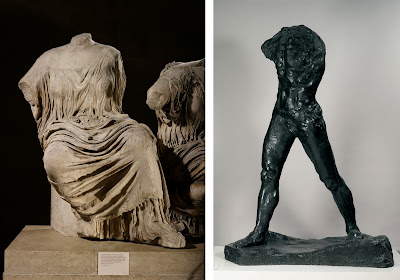 The final coupling from the exhibition we’re highlighting here shows a goddess (figure K) from the Parthenon’s east pediment – headless, armless – with Rodin’s Walking Man, also headless and armless. The one is raising herself from her seat, the other strides out of the exhibition into a different world, that of modernism and abstract expressionism. In Walking Man, we can see how Rodin radically lopped off the head of his own sculpture in order to make it more like the Parthenon sculptures.
Rodin is unique in the history of art for his intense determination to bridge the gap between the past and the present. What mattered for him in his own work was the expressive power of the body and he found it in the works of Pheidias.