A BOOK ATTEMPTS TO SOLVE THE JOYS AND MYSTERIES OF PUZZLES

Oftentimes it feels as though art satisfies itself by “raising the question” or “complicating ideas” about a subject. Puzzles, by contrast, hold an inherent promise of resolution.
Sarah Rose Sharp 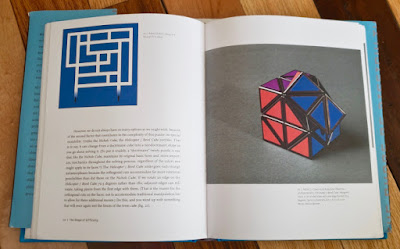 The Shape of Difficulty: A Fan Letter to Unruly Objects (2019, Penn State University Press), by Bret L. Rothstein, interior spread (all images by the author for Hyperallergic)

Perhaps I am not the target audience for Bret L. Rothstein’s “fan letter to unruly objects,” The Shape of Difficulty (2019, Penn State University Press), because it presupposes that its reader is under some kind of duress. The introduction begins with a question: “What in the world possessed you to pick up this book?” — implying that the average reader has little tolerance for difficulty as a concept, practice, or area of interest. My instantaneous response to notions of difficulty in the object-space, as defined on the cover by an image of “Hexcopter 12 Curvy,” a kind of interdimensional-looking Rubix Cube designed by David Pitcher, was ooh, goody — which probably says a lot about me, my interests as a critic, and my love of games (and, incidentally, my problems with romantic relationships). I consider difficulty to be an invitation for engagement, and need no argument for its place in cognitive and social space. Rothstein, though, goes on to present a very detailed and eloquent argument in his introductory chapter: “What We Talk About When We Talk About Difficulty,” which paves the way for the ideas and objects to follow. Bret, please, you had me at the three-page glossary of descriptive game-theory vocabulary. Burrs! Decomposability! Multicursal! Tetromino!
Rothstein is quick to clarify that for the purposes of his study, he is restricting himself to one category of object: the mechanical puzzle, defined as a three-dimensional shape, physically manifest, that poses a combined logistical and intellectual challenge. From there, however, all bets are off, and The Shape of Difficulty explores a huge range of puzzles, including simple ones like jigsaw puzzles; historically obscure ones like a 14th-century Swan Mazer at Corpus Christi College in Cambridge, designed to dump its contents if filled to the brim; secret-opening boxes; topological games; and many more. Rothstein argues that, in addition to their more superficial function of entertainment or beguilement, mechanical puzzles “can help us address a number of pressing questions about how cultivated difficulty operates in expression more generally.”

The notion of “cultivated difficulty” is, of course, distinct from things that are accidentally difficult or confusing. As an artist and a critic, I very much appreciate the distinction between objects and concepts I have to wrestle or manipulate to find resolution, and those that are obtuse or impenetrable because they have not been designed for accessibility by any means. Put another way, it is easier to make a problem than to solve it. Oftentimes it feels as though art satisfies itself by “raising the question” or “complicating ideas” about a subject, and then rolling merrily on its way. Puzzles, by contrast, hold an inherent promise of resolution — perhaps obscure, perhaps requiring incredible commitment and attention, but achievable. This makes them perfect vehicles for cultivation, in the user, of the kind of commitment to attention that is under constant duress from the tempo of daily living. If the points Rothstein introduces in his introduction are compelling, the detailed conclusion he lays out should leave no reader in doubt of the broad social benefit of puzzles — presumably the reason they have occupied a niche cultural space for thousands of years.

This is an academic text, and accordingly it is heavily researched and footnoted. Rothstein outlines three especially important aspects of the kind of interpretive difficulty embodied by puzzles: (1) that misunderstanding is often cultivated (rather than accidental or incidental); (2) that people frequently seek to both extend and limit the duration of that misunderstanding, and — as the title reinforces; (3) that specific material configurations (shapes) are vitally important for that cultivation. Here, again, we see a distinction between puzzles and art. While art is free to make choices based on aesthetics or conceptual power, puzzles must consider functionality and expression of the problem at hand. Many of the puzzle-makers presented by Rothstein are highly theoretical thinkers, dealing with mathematics and physics, and some of these puzzles are exercises in physically manifesting problems of quantum mechanics. It may seem a small distinction to say that choice of shape is inherently tied to the objective of the puzzle, rather than an aesthetic value chosen to represent an art idea; it is certain that in art there are more “right” answers than in puzzles. Perhaps that is why the field of physics makes better tangible progress of untangling its mysteries than art does of untangling matters of the human condition.

And yet, though Rothstein is getting unabashedly granular on the field of enigmatology — a field that attracts mathematicians, engineers, and literal rocket scientists more often than fine artists — he manages to present his findings and musings in highly accessible and even funny language. The sincere joy he takes in unraveling the philosophy behind difficult objects is not lost in his academic formatting.
“Though my arguments refer primarily to mechanical puzzles, I make no claim to special expertise,” he writes. “In fact, as many of the designers mentioned in these pages can tell you, I play with puzzles the way most people sing in the shower: willingly, even joyously, but also catastrophically.”

The good news for Rothstein, and people who, like him, enjoy engaging with puzzles despite having no particular skill with them, is that outcomes are not nearly as important (he argues) as process. The book’s final chapter is dedicated to a topline view of recreational difficulty, broken down so finely in the preceding chapters, and its larger role in the development of human civilization. Like so many aspects of the humanities, puzzles engender wonder, curiosity, and hypothesizing — in other words, they are concrete tools for developing critical thinking and interpretive ability. In this critic, Rothstein found a willing audience, but for those not intuitively drawn to puzzle through difficulty, the author makes a strong case for the puzzle as a mechanism not for frustration, but intellectual rigor. Or, as he puts it: “ … this book frames cultivated interpretive difficulty as a desireably asymptomatic, tentative, and idiosyncratic approach to rightness.”
The Shape of Difficulty: A Fan Letter to Unruly Objects by Bret L. Rothstein will be released in May, 2019, by Penn State University Press and is available for pre-order on Amazon and other online retailers.