APPLE TV+ ISN’T TRYING TO BE THE NEW NETFLIX

The tech company’s planned streaming service, set to debut in the fall, will emphasize star power and quality over quantity.
DAVID SIMS 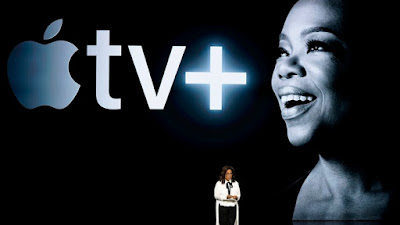 Apple’s formal announcement of its new original-TV service, rolled out Monday, was high on prestige and low on details. A keynote presentation given at the company’s headquarters in Cupertino, California, began with hefty explanations of other projects the company has in the works, including a credit card, a news subscription service, and an updated gaming platform. Finally, Apple CEO Tim Cook turned to the main event of the day: a package that’s been dubbed Apple TV+. What will it offer? Shows featuring big stars—such as Reese Witherspoon, Jennifer Aniston, Steve Carell, Jason Momoa, and Kumail Nanjiani—and run by major creators, including Steven Spielberg, J. J. Abrams, and Oprah Winfrey. What will it cost? That’s still a mystery.
Early details about Apple’s plans for original content have been public for some months. The company first picked up an “untitled morning show drama” (now titled The Morning Show) starring Witherspoon and Aniston in 2017, not long after hiring the Sony TV executives Jamie Erlicht and Zack Van Amburg to oversee show development. Apple has been pursuing other film and TV projects in the intervening years. Monday’s presentation, headed up by Cook as per usual for the company, was anticipated as the debut of more practical information about how Apple TV+ customers would actually watch the shows. Though one big question was answered—Apple’s programming will be available via an app, even if you don’t own an Apple device—the biggest one, about pricing, was not.
The company clarified that Apple TV+ would be an ad-free subscription service and that it would debut in the fall. But the price point will be one of the most crucial decisions for Apple, which is trying to muscle into territory dominated by other streaming services, such as Netflix, Hulu, Amazon Prime, and HBO Now. Apple TV+ seems as if it will offer a broadly similar experience, debuting a slew of original shows online, though it will likely lack the deep video libraries of its rivals. Instead of offering breadth, Apple TV+ is leaning on star power, hoping to tempt people to join just to see actors like Witherspoon, Aniston, and Carell.
Along with The Morning Show, the other programs rolled out were See, an epic drama starring Momoa and Alfre Woodard that’s set in a future where the human race has gone blind; a revival of Spielberg’s 1985 anthology series Amazing Stories; and Kumail Nanjiani’s Little America, a series about the “true stories of immigrants in the U.S.” A short clip package also showed scenes from the modernized Emily Dickinson bio-series Dickinson (which stars Hailee Steinfeld); a mystery series called Magic Hour (with Brooklynn Prince); and the sci-fi space-race series For All Mankind (co-created by Battlestar Galactica’s Ronald D. Moore).
Beyond that extended montage, the presentation revealed next to no footage of new shows. Instead, stars themselves came out to announce their involvement with Apple and summarize the message of their respective programs. Cook saved the biggest name for the end, with Oprah Winfrey unveiling two projects, one a docuseries and one centered on her book club. Apple is clearly hoping that the stature of its collaborators can help it fill a “quality TV” void that might be created by HBO, which is being pushed to pump out more content, Netflix-style, by its new owner, AT&T.
But none of the companies that Apple TV+ will have to compete with launched solely on the basis of original TV. Netflix started out as a DVD-rental company before introducing a big streaming library, and only years after that did it begin to offer original programming to subscribers. HBO has critically acclaimed, award-winning TV shows, but it also includes a huge selection of movies in its subscription cost. Hulu makes episodes from many of the biggest shows on network TV available online the morning after they air. Amazon Prime, of course, is a gigantic bundled service that builds in free shipping and other perks for the online marketplace. Apple TV+ will be available on every television—but will a few star-studded shows alone be enough to justify a monthly cost?
If nothing else, Monday’s event confirmed Apple’s plans to brand itself as a serious media company with original streaming programming, news subscription services, and a reason for the company’s Apple TV hardware to exist beyond iTunes rentals. Apple’s incursion into original television has been mulled internally for at least a decade; as Josef Adalian noted in Vulture last week, Steve Jobs mentioned his plans for it to his biographer, Walter Isaacson, before passing away in 2011.
https://www.theatlantic.com/entertainment/archive/2019/03/apple-tv-tim-cook-oprah-winfrey-reese-witherspoon-jennifer-aniston/585700/