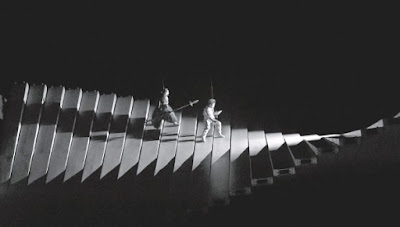 Mr. Lepage’s ambitious staging of Wagner’s four-opera “Ring” cycle, which will be part of the repertory through May 11, relies on a massive, complex set: 24 planks that rotate like seesaws on an axis that can rise and fall. This 44-ton “Machine,” as it became widely known, was prone to glitches on a Wagnerian scale starting when “Das Rheingold,” the first installment, was introduced in 2010.

The planks can be twisted into sculptural set pieces and bathed in intricate video imagery. Debate among Wagner lovers over the Lepage “Ring” was heated from the start. But there was one thing everyone agreed on: The Machine too often squeaked and groaned when it kicked into action.

After a major retooling, it has been tamed — well, mostly. There were occasional creaking sounds on Saturday. But things seemed to work smoothly.

Those who were captivated by the staging years ago will be pleased to see the three mermaidlike Rhinemaidens, suspended from wires, seeming to cavort in the actual waters of the river, video-projection oxygen bubbles floating from their mouths to the surface, and pebbles on the riverbed rustling to their touch. We get an aerial view of the god Wotan and his trickster ally Loge walking sideways on a grand staircase down to the realm of Nibelheim in search of the dwarf Alberich.

But for me, the noises and the glitches were never the real problem with this production. My main issue was that Mr. Lepage seemed to have scant interpretive insight into a work that, since its 1876 premiere, has been seized upon by generation after generation as an allegory about roiling issues of the time: a Marxist narrative of class struggle; a cautionary tale about the corrupting influence of power; a warning about environmental destruction; an absurdist reflection of nihilistic leadership.

There’s certainly much in our world with which the “Ring” resonates. But if Mr. Lepage has ideas about the relevance of the cycle today — or even about who Wagner’s characters are and how they relate to one another — little of that comes through.

Even though the set seemed to be working, the cast is clearly distracted by the physical demands of the production. It was hard not to fear for the feisty tenor Norbert Ernst, making his Met debut as Loge, when he had to walk backward up steep planks to report on the approach of the two giants. Why backward? Well, the wire securing him was attached to his back. There was no way Mr. Ernst could make this moment look natural.

The good news is the eloquent and urgent performance of Wagner’s score that the conductor Philippe Jordan drew from the orchestra. Back at the Met for the first time since 2007, Mr. Jordan, 44, currently the music director of the Paris Opera, will assume the directorship of the Vienna State Opera in 2020.

I hope this busy conductor can make time to appear at the Met in the future. He led a refreshingly lithe and transparent account of “Rheingold,” keeping things fleet and colorful during playful stretches, but drawing out dark, heaving undercurrents when the music turned ominous. There were a few too many fumbles in the brasses to ignore. Still, Wagner’s two-and-a-half-hour score seemed to flow right by.

The standout member of the cast was Tomasz Konieczny, a powerhouse bass, in a breakthrough Met debut as Alberich. I tend to prefer portrayals that bring out Alberich’s suffering and bitterness; with a big, penetrating voice that can slice through the orchestra, Mr. Konieczny made Alberich sneering and dangerous.

Once he had stolen the gold, forged the magic ring and become the gods’ powerful nemesis, this Alberich dominated the rest of the opera, in place of, as usual, a stentorian Wotan. In that role, the bass-baritone Greer Grimsley was solid, but for whole stretches his voice was leathery and dry.

He came across as the suffering one, a god who already feared his time had come and gone. He seemed outmatched by this Alberich, with a breast-plated costume, looking like a kitschy reject from “Game of Thrones,” that didn’t lend him dignity.

As Fricka, Wotan’s wife, the mezzosoprano Jamie Barton seemed to be holding back some of the natural power in her voice. The result, though, was an unusually lustrous-toned and feminine Fricka. The soprano Wendy Bryn Harmer brought gleaming sound and intensity to the frantic goddess Freia, whom Wotan glibly promises to the giants Fasolt and Fafner (Günther Groissböck and Dmitry Belosselskiy, both excellent) as payment for building his castle in the sky.

The rich-toned mezzo-soprano Karen Cargill, as the all-knowing earth goddess Erda; the reedy tenor Gerhard Siegel, as Mime, mercilessly bullied by his brother, Alberich; Adam Diegel and Michael Todd Simpson, as the gods Froh and Donner; Amanda Woodbury, Samantha Hankey and Tamara Mumford, as the three Rhinemaidens: All sang strongly.

But the singers never came together as a cast and seemed too often stranded on their own, a continuing shortcoming of this production.
During the ovation at the end, the backstage crew came onstage to share in the applause. It was a generous gesture. They are the real heroes of Mr. Lepage’s “Ring.”