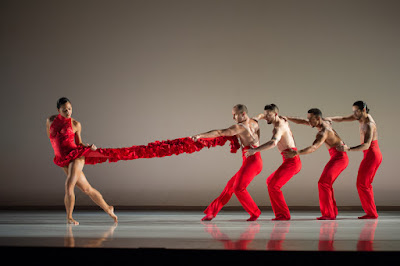 Ballet Hispánico in Annabelle Lopez Ochoa’s “Línea Recta” at Jacob’s Pillow Dance Festival 2017 (photo by Christopher Duggan)
Art Movements is a weekly index of developments centering the people of the arts and culture sphere. Listen to our weekly podcast of the same name on iTunes.

Accolades
The Mayor’s office in Boston, Massachusetts has awarded $487,000 in organizational grants to 221 local arts organizations. [Up To Boston]

Anita Hill was named the recipient of the PEN Courage Award. [via email announcement]

Has Jingban, Hsu Che-Yu, Eisa Jocon, and Phan Thảo Nguyên have been named the finalists for the 2019 Hugo Boss Asia Art Award for Emerging Asian Artists by the Rockbund Art Museum in Shanghai and fashion house Hugo Boss. [ARTnews]

Rhizome has announced the technologists and artists participating in the 2019 edition of Seven on Seven, its art and technology platform it founded in 2010. [Artforum]

Tang Qingnian 唐慶年 was named the Cheng Family Foundation Artist-in-Residence for 2019 by the Huntington Library, Art Collections, and Botanical Garden. [via email announcement]

Emilija Škarnulytė was awarded the fifth edition of the Future Generation Art Prize by the PinchukArtCentre. [via email announcemnet]

Opportunities
Knockdown Center in Queens, New York is accepting Group Exhibition, Solo Project + Installation, and Main Space Project proposals for 2019–2020. Applications are due April 15. [Knockdown]
The Leslie-Lohman Museum of Gay and Lesbian Art is accepting applications for its queer theater and performance residency. Selected artists will receive an honorarium and free rehearsal space, and will present a work-in-progress showcase at the museum at the end of the residency. Residents will also have the opportunity to stage their project at La MaMa experimental theatre club. Applications are due May 3. [Leslie-Lohman]
The Museum of Art and Design is seeking New York City-based applicants under the age of 30 for its Artist Studios program. Artists-in-residence receive studio space and a stipend. Applicants must also identify racially and/or culturally with a historically underrepresented community and demonstrate the need for financial assistance to advance their artistic careers. Selected artists-in-residence will receive studio space and a stipend. Applications are due April 18. [MAD]