It’s stuffed to the brim with oodles of poodles and painted Pomeranians. But are these pooch paintings Pugcassos, or just plan Shih Tzu? 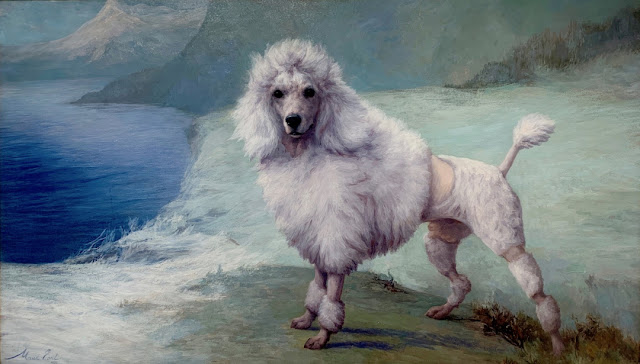 There are dogs on Instagram who make more money than you. Some have modeling contracts and sponsorship deals; others have even won acting awards. Research also indicates that canines have a proverbial leg up on felines, eclipsing them in online searches as early as 2014. And despite what the sudden arrival of cat cafés across New York might imply, the city boasts a dog population that’s 20% higher than their whiskered colleagues, according to data from a 2012 NYECD study.

It should therefore come as no surprise that New York now boasts a two-story museum in midtown devoted to dogs. The galleries are stuffed to the brim with oodles of poodles and painted Pomeranians. But are these artworks worthy of, say, Pugcasso — or are they just plain Shih Tzu? 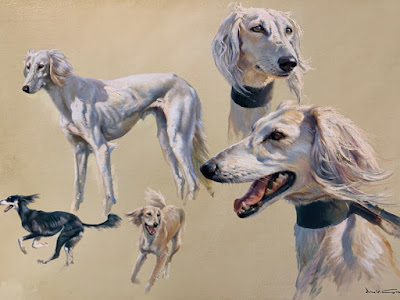 Returning to the city after a 30-year stint in the suburbs of St. Louis, Missouri, the American Kennel Club’s Museum of the Dog toes the line between brilliant and banal. As the recent parent of my own fur baby (shameless plug), I have little reason to reject an opportunity to bask in the cuteness of a few dozen portraits of good boys and girls. But the art critic within me expects much more from a museum than images of moody poodles by the seashore. Rest assured, there are a handful of bright spots in the AKC’s art collection, but the current curatorial program is overwrought in its emphasis on dog gravitas and regality.
Perhaps this is an overcorrection set against the art history of dogs, which often fails to give pups the same opportunities that kittens have. Certainly, there are no dog masterpieces on par with something like Édouard Manet’s “Olympia” (1863), which features a very prickly (and symbolically charged) black cat. And major museums have planned no paeans to canines on the same scale as something like the Brooklyn Museum’s long-term exhibition, Divine Felines: Cats of Ancient Egypt. Art criticism, too, is a cat’s game with many writers pushing this whiskered agenda forward. 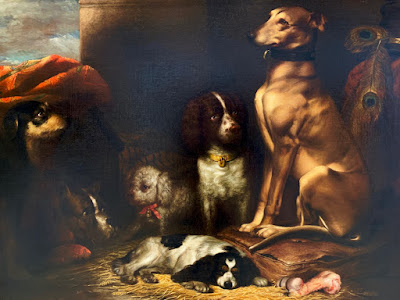 The Museum of the Dog has a taste for overly serious portraiture. Black terriers sit upright on their cushiony thrones while bloodhounds bathe in the chiaroscuro light of a watery hunting scene. Attention to the macabre in dog portraiture began in earnest in the 19th century, when the genre got its biggest boost from Queen Victoria. Throughout her lifetime, the monarch owned 10 dogs in addition to Shetland ponies, goats, and parrots. (Keep in mind, this list is nothing to Queen Elizabeth II’s cohort of 30 corgis since rising to the throne in 1952.) Paintings of the former queen’s pets were so widely circulated that they became the subject of parody. George Henry Hall’s 1849 painting “The Levee” refers to the ritual attendance of King Louis XIV’s court to the French ruler’s morning waking; nevertheless, the composition mimics Sir Edwin Landseer’s 1838 portrait of Queen Victoria’s animals, titled “Her Majesty’s Favourite Pets.” Subtle with its humor, Hall’s portrait ridicules the pomp and circumstance of royalty by casting spaniels and greyhounds in the roles of nobility. With puffed chests and anxious looks, the dogs’ obvious impatience lampoons the self-stifling traditions of the royal class.

Scattered throughout the museum are crowd-pleasing technological diversions like an augmented realty game of fetch with a cartoon dog. Upon first arriving to the museum, most visitors will likely head straight for the touch-screen monolith that matches your photo with the dog breed you most resemble. (The program identified me as a German Pinscher, which it describes as “vivacious” among other adjectives. Dear reader, under no uncertain terms has anyone ever described me as “vivacious.”)
Evolutionary biology teaches us that dogs are the descendants of wolves. Artists in the late 19th century increasingly featured canines in their hunting scenes as symbolic of man’s connection to the wild decades after the Industrial Revolution polluted the land and enticed rural villagers to the cityscape for factory jobs. With that context in mind, Richard Ansdell’s “Highland Tod, Fox Hunter” (1859) makes a lot more sense. The painting includes a garrison of 14 dogs and nine humans traveling through what appear to be the Scottish Highlands. A visual encyclopedia of the era’s most popular British breeds, the work features collies, hounds, and terriers. More dramatic is the artist’s 1865 painting of an enormous mastiff, called “The Poacher.” Here, a man wrestles to control his giant dog, having just fallen on a sack of slain birds and rabbits. The mastiff looks into the distance with bleary eyes as his owner sternly grips his collar.

Elsewhere though, the museum reminds us how humans have engineered dogs for centuries. Where would the American Kennel Club be, after all, if it wasn’t for these canine eugenics projects that have resulted in hundreds of different breeds? (The organization officially recognizes only 192 dog breeds from an estimated 340 known throughout the world.) On the museum’s second floor are two paintings hung together for the sake of juxtaposition: “Ch. Nornay Sadler” (1940) by Edwin Megargee and “The Totteridge XI,” (1897) by Arthur Wardle. The latter work depicts a smooth fox terrier with anatomical precision, making the dog an ideal of the breed. The painting below depicts nearly a dozen other fox terriers, all imperfect attempts at achieving the perfection displayed above.
Here the museum is at its best, drawing a connection from the institution to its art collection through the narrative of breeding. Still, I would imagine that a more critical museum divorced from such an authoritative organization would more critically address the links between breeding programs and their results. For whatever positive results human-engineered diversity in dogs has wrought, there are countless examples of dogs who have shorter lifespans and health conditions. Looking at you, bulldogs and beagles. 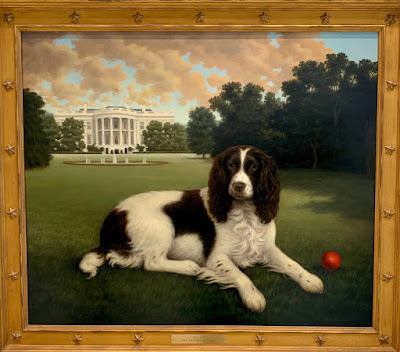 Still, I have hope that the museum will use its new square footage to execute more ambitious exhibitions in the future. Where are William Wegman’s Weimaraner photographs? What happened to Picasso’s adopted dog, Lump. And we need shows devoted to presidential dogs. (A portrait of George HW Bush’s English Springer Spaniel is here, but what about Lyndon B. Johnson’s beagle or Barack Obama’s Portuguese Water Dog?) Throw this strange side of political history a bone!
The American Kennel Club’s Museum of the Dog is now open to the public at 101 Park Avenue, Midtown, Manhattan.