NEW YORK’S MET MUSEUM SHOWCASES THE POWER OF CAMP IN NEW EXHIBITION. CAMP: NOTES ON FASHION WILL TELL THE STORY OF CAMP’S ORIGINS FROM VERSAILLES TO 1930S BERLIN 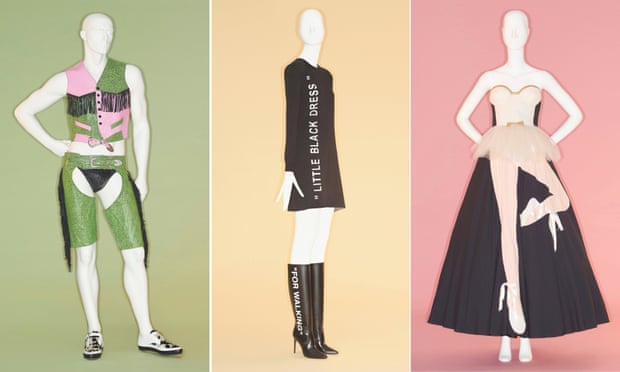 Jeremy Scott in 2012, Virgil Abloh’s Off-White in 2018, and Moschino 1989. Photograph: Johnny Dufort, 2018/Image courtesy of The Metropolitan Museum of Art

Camp both high (the ballet, Caravaggio) and low (superheroes, Strictly) will be the subject of this year’s major fashion exhibition at New York’s Metropolitan Museum of Art.

At a press conference in Milan, Italy, its curator, Andrew Bolton, said camp spoke to the zeitgeist because of its roots in disenfranchised communities.

“When you look at the times when camp comes to the forefront of culture, it is at moments of polarisation. The 1980s of Thatcher’s Britain and Reagan’s America was one such time, and now is another. It seems to me that this is because camp is a powerful language for the marginalised,” he said.

Camp: Notes on Fashion, which opens in May, will trace how a language with its roots in underground gay culture became mainstream. (Last year, Bolton told the New York Times: “Trump is a very camp figure.”)
On the stage of the miniature pink and green puppet theatre in Milan – a venue chosen for its campness – was an image of the “ghost narrator” of the show, Susan Sontag, photographed by Andy Warhol in black cat eye sunglasses. (“Sunglasses are camp,” noted Bolton.) 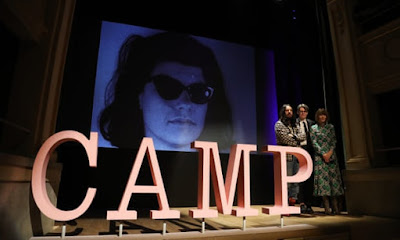 “We go from sun kings to drag queens,” said Anna Wintour, speaking in her capacity as trustee of the Met Museum rather than in what she referred to as her “day job” as editor-in-chief at American Vogue.

Inspired by Sontag’s 1964 essay Notes on Camp, the show’s 125 exhibits will include catwalk pieces by exhibition sponsor Gucci and by conceptual Dutch duo Viktor Horsting and Rolf Snoeren of Viktor&Rolf, alongside artworks including a full-length portrait of Oscar Wilde in a frock coat. It will tell the story of camp’s origins in Louis XIV’s court at Versailles, through the legendary drag queens of Victorian London, to the 1930s Berlin nightclub scene.

Wintour gave an uncharacteristically emotional tribute to the late Karl Lagerfeld, pieces from whose 1987 Chanel collection inspired by Versailles are included in the exhibition. He was “the very best benefactor and collaborator, as erudite as he was generous,” she said. “Bearing in mind Karl’s wicked and wonderful sense of humour, I know he would have loved this exhibition.”
The exhibition may be controversial among members of the LGBT community who feel that defining camp primarily as an aesthetic belittles its significance. This issue of the ‘cultural appropriation’ of camp was addressed by Bolton, who acknowledged the grievance felt by those who believe Sontag downplayed their connection to camp.
“Camp began as a private code in the gay community,” he said, adding that he hoped to engage with this debate in a nuanced way. “There is a generosity to camp, as well as a great sophistication,” he said.