Simple and stark, the biblical tale of the Queen of Sheba has launched innumerable, sumptuous artworks. The queen first appears as a visitor to King Solomon’s Jerusalem court in the Old Testament’s Books of Kings. She brings gifts of gold, spices, and stones from her faraway land. The queen tests Solomon with difficult questions (unspecified in the text), and in his answers, she begins to appreciate Solomon’s great wisdom. She also admires the prosperity within his palace. To indicate her newfound respect for the Israelite king’s single god, the queen offers a blessing: “Blessed be Yahweh your God who has granted you his favor, setting you on the throne of Israel!” she proclaims. Solomon, in turn, gives her presents. Then she goes home to her own country.
It’s hardly the most lurid story in the Bible; no one dies, commits adultery, or suffers a plague. Yet over millennia, this unadorned narrative has undergone myriad transformations that alternately reinvent the Queen of Sheba as a converted heathen, the founder of a nation, and a magical being. Three major religious traditions—Judaism, Christianity, and Islam—spanning Asia, Europe, and Africa have claimed her as their own in vastly different literary and artistic representations. Nevertheless, the characters of Solomon and the Queen of Sheba, and their narrative of cross-cultural exchange, uniquely transcend borders and beliefs. 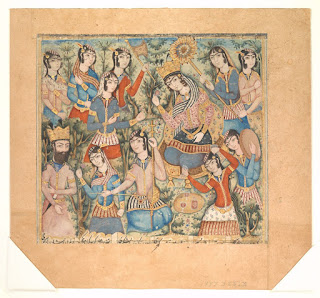 The Queen of Sheba, who isn’t invoked by name in the original story, is known as Bilqis in the Muslim tradition (“Sheba” refers to her homeland, which scholars suggest might be in modern-day Yemen or Ethiopia). According to Nicholas Clapp’s Sheba: Through the Desert in Search of the Legendary Queen, the Egyptian storyteller Abu Mohammed ibn ‘Abd Allah al-Kisa’i generated most of the long-lasting lore about Bilqis in the 1100s, which he recorded in Qisas al-Anabiya’ (“Tales of the Prophets”).
In her native land of Kitor, these tales relate, Bilqis lived among magical creatures, or djinns (in some versions, she’s part djinn herself). Solomon—Sulaiman, in Arabic—is the king of the djinns. During her stay in the king’s court, Bilqis tests Sulaiman with riddles, which he successfully answers. Later on, the king tricks Bilqis into baring her leg over a sheet of glass by making her believe it’s a pool of water. As Clapp tells the story, when her hairy leg is revealed, Sulaiman orders the djinns “to prepare a lotion of slaked lime and ash and so remove the troublesome hair.” Soon after, Sulaiman and Bilqis marry and bear a son named Rehoboam before Bilqis returns to Kitor.
Many scholars believe that at its core, the Sulaiman–Bilqis narrative is about conversion: Solomon converts Bilqis, a sun-worshipper, to monotheism—a core tenet of Judaism, Christianity, and Islam—through his wily intelligence. The detail about Bilqis’s hairy legs portrays her as an animal—a heathen—to be subdued, feminized, and converted. “I think the underlying thing is that Solomon seemed to have tamed certain fantastic beasts.…He was a powerful force for good, and she became that, too,” Sheila Canby, a curator at the Metropolitan Museum of Art, recently told Artsy.
For centuries, Persian artisans adorned illustrated manuscripts with the tale of Solomon and the Queen of Sheba. The pair, according to Canby, became “protective devices” with talismanic power. When artisans rendered them on lacquerware or metalwork, they offered a sense of safety to their owners. Canby views Solomon and the Queen of Sheba as a “force for good”—“helpful people” within a broader religious context (similar, perhaps, to the Catholic conception of patron saints).
The Met owns a sumptuous, fantastical depiction of the queen that hails from modern-day Iran. The Queen of Sheba Enthroned (late 19th–early 20th century), an ink-and-watercolor painting originally part of a manuscript, features Bilqis on her throne at the center, holding what appears to be a pomegranate (a symbol of beauty), while her subjects offer her gifts. Sulaiman originally appeared on the opposite folio. Spirits fly overhead while human members of the court gaze at the central pair. Intricately decorated with bright, gilded patterns, the piece exemplifies the artistic traditions in Persia at the time of its creation, specifically a renewed interest in the school of Shiraz miniature painting style dating back to the 1570s.
In Italy in the middle of the 13th century, Jacobus de Voragine, archbishop of Genoa, centered the Queen of Sheba in a new legend that elaborates on the original Bible’s suggestion of her conversion and links Old Testament narratives to a larger Christian tradition. Early Italian Renaissance artist Piero della Francesca famously rendered The Legend of the True Cross in a complex cycle of frescoes (1452–66) in the Cappella Maggiore di San Francesco in Arezzo.
In his depiction, Adam’s son Seth plants a twig from the Tree of Knowledge in his deceased father’s mouth. Over the generations, it grows into a tree, which Solomon tries to use to build his temple. The wood appears to shapeshift, confounding the builders so Solomon orders them to repurpose it as a footbridge across a pond instead. When the Queen of Sheba nears Jerusalem on her way to meet Solomon, she sees the bridge and has a vision of a future savior who will one day hang from it. She kneels and adores the wood, then wades into the water to avoid treading on it. The queen tells Solomon about her revelation, which foretold the end of the Jewish kingdom. He has the wood buried, though it’s eventually discovered; Jesus’s cross derives from the tree, and the cycle concludes with its exaltation by converted pagans. 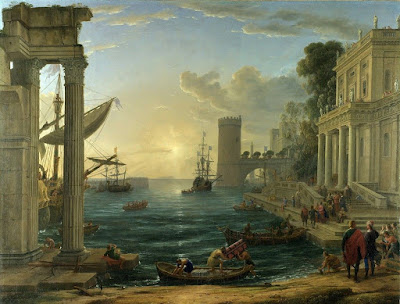 Claude Lorrain
Embarkation of the Queen of Sheba, 1648

Throughout the Renaissance and Baroque eras, the story of Solomon and the Queen of Sheba also served as a vehicle to depict impressive feats of architecture (a fitting use of the narrative—the Christian tale reads like a parable of difficult building projects). In his own 1545 version of their meeting, Solomon and the Queen of Sheba, Tintoretto placed her in the exact center of the painting. He employed a chiaroscuro effect to highlight the architecture in favor of the large cast of characters. But light radiates from the fair queen, dressed in fashionable Venetian clothing, who seems to illuminate the imagined classical buildings and harbor behind her.
French artist Claude Lorrain took a similar approach in Seaport with the Embarkation of the Queen of Sheba (1648). He dwarfed his human figures with massive Palladian structures outfitted with regal columns and turrets. The sun sparkles off the sea, giving the setting a utopian aura. Solomon and the queen—wherever they may be—are clearly secondary to the fantastic scene…………