HOLLYWOOD GODFATHER: MY LIFE IN THE MOVIES AND THE MOB GIANNI RUSSO, WITH PATRICK PICCIARELLI. ST. MARTIN’S, 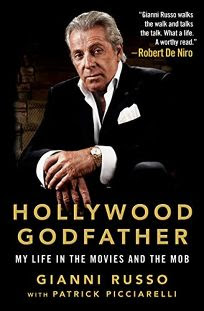 In this robust, fast-paced memoir, Russo describes his life going from being a real-life mobster to landing a role playing one in The Godfather. Born in New York City’s Little Italy in 1943, Russo had polio as a boy, left home at 12, and slept on flour sacks in a bakery. Selling pens on the street, his brassiness got him hired as errand boy for mob boss Frank Costello. In a short time, he was fetching skimmed cash from Las Vegas casinos and having sex with Marilyn Monroe, whom he met while washing hair in a New York City beauty salon (“We wound up in bed for the entire weekend, climbing out only when needed”). In 1971, he talked his way into the role of Carlo Rizzi in The Godfather, eventually playing other mobsters in dozens of movies. In a tone that sometimes rings of false modesty, he writes of befriending Frank Sinatra, drinking with Marlon Brando, having a food fight with Liza Minnelli, shooting up a hotel room with Elvis Presley, and managing singer Dionne Warwick. Stretching credulity, he claims inside knowledge of both the JFK assassination and the Mafia–Vatican Bank money laundering scandal, and tells of meeting Pablo Escobar in 1988 after shooting dead one of the cartel chief’s men. Russo’s exhilarating memoir packs a punch. Agent: Frank Weimann, Folio Literary. (Mar.)