In Walter Gropius: Visionary Founder of the Bauhaus, author Fiona MacCarthy attempts to debunk the myth that the German pioneer of modernist architecture is somehow an unsexy subject for biographical study.
Ela Bittencourt 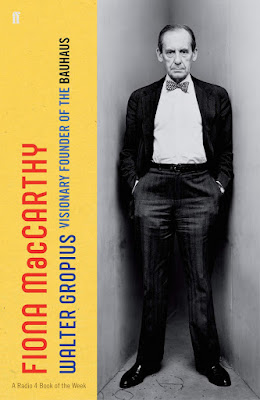 Biographies of artists are an unwieldy yet wildly rewarding genre, with authors heroically flexing their muscles to do justice to both the personal histories and artworks of their subjects. Fiona MacCarthy’s thick and scrupulously researched Walter Gropius: Visionary Founder of the Bauhaus is no exception. Early on, MacCarthy states her goal of debunking the myth that Gropius, born in Berlin in 1883 and now considered one of the pioneering masters of modernist architecture, was somehow an unsexy subject for biographical study. This myth, it seems, was perpetuated largely by an unflattering portrait of Gropius in Tom Wolfe’s controversial book of cultural criticism, From Bauhaus to Our House (1985), which takes issue with the Bauhaus movement’s doctrinaire embrace of the socialist cause.

To draw a more captivating, personable portrait of Gropius, the biography’s early chapters are devoted to his colorful, tempestuous romantic affairs, most notably with composer Gustav Mahler’s wife, Alma Mahler. Illustrating this affair is a complicated feat: emotionally unstable, capricious Alma clearly gets the short end of the stick, to the extent that she is treated as Gropius’s lifelong tormentress, rather than as a frustrated talent in her own right, whose reputation nevertheless depended on powerful men. Nevertheless, Alma emerges as the more interesting person. Gropius, for his part, first endures a sobering though not life-changing service in the German military, before getting down to creating his legacy.

That legacy, of course, is immense. MacCarthy’s middle chapters more than do justice to Gropius’s visionary approach to architecture as a complete, totalizing art. We get a small taste of his ambitions prior to the First World War, but it isn’t until 1919, when Gropius takes over an arts and crafts school in Weimar, Germany, called the Weimar Kunstgewerbeschule, that his Bauhaus program takes shape. From the start, Gropius insists on interdisciplinary education, with arts and crafts conjoined. The faculty, in various, impressive permutations, includes such artists and Lyonel Feininger, László Moholy-Nagy, Paul Klee, Wassily Kandinsky, and architects like Mies von der Rohe and Marcel Bauer. The wide ethnic mix of students and the school’s reigning egalitarian spirit immediately sets it apart, against the background of Germany’s rising nationalist socialism, and its virulent opposition to the avant-garde.

Gropius shines in the artistic milieu as an enabler and ideologist. Once he frees himself of Alma — with whom he has a child — his new wife, Ise Gropius, acts as the school’s development and marketing person, ensuring its acclaim. There come early projects, such as The Sommerfeld House, in Berlin, a tremendous collaborative effort, which in its materials recalls the work of American architect Frank Lloyd Wright. This early more romantic work is soon superseded by Gropius’s increasingly streamlined, rigorous, even austere International Style.

There is no finer example of this new architecture than Bauhaus Dessau, the school’s new site, after it is forced to relocate to find more liberal municipal patrons, in 1925. The biography includes few images, but in them, the shock of the new — white, clean lines, the predominance of glass and functional design — is immediately apparent. MacCarthy regales readers with wonderful details of Ise taking guests on tours of the university complex, charming them with visions of modern kitchens, and of daily life in the Masters’ units, where greats like Kandinsky and Klee shared the living space (there is a lovely photograph of the two drinking afternoon tea at a small table perched in the woods, with white cubical apartment units visible in the background). MacCarthy also peppers her tale with the first grumbles of discontent, possibly peer envy, among Bauhaus circles, as some find Gropius and Ise’s house too lavishly equipped. All in all, Bauhaus Dessau sounds like a lofty liberal arts college where the spirit of invention is infectious and unstoppable.

In 1933, the rise of Nazism, with its strong opposition to modernism, forced the Bauhaus to close. Gropius, driven into exile, faced leaner times, first in England, and then in the United States. As the head of Harvard University’s Architecture Department, his light shone once more, although, as MacCarthy tells it, at times he grew resentful about having to focus on teaching, rather than his own professional development, as did many of his exiled Bauhaus colleagues. Mies van der Rohe, a former Bauhaus Dessau director, who also taught in the US, left a decisive stamp on Chicago’s architecture, and in many ways outshone Gropius as an architect, as did Marcel Breuer, who designed the original Whitney Museum (now the Met Breuer) on Manhattan’s Upper East Side.

Yet Gropius left behind a much broader awareness of the inventiveness of modern architecture, organizing such essential Bauhaus surveys as Bauhaus 1919-1928, at the Museum of Modern Art (MoMA), in 1938. Although brief and fraught, as MacCarthy notes, the exhibition traveled throughout the United States, thus solidifying Bauhaus as a household name. As a co-founder of The Architects Collaborative (TAC), the largest American architecture association (active till 1995), Gropius left a further mark on the Harvard University campus with a blunt modernist intervention into its overall neo-Georgian style: the lean white Graduate Center, for which Joan Miró composed an abstract mural (now at MoMA). Finally, MacCarthy makes a forceful case for Gropius’s greatest American achievement: the Pan Am (later Met Life) building in New York, though here, too, van der Rohe’s “superlatively elegant thirty-eight-story Seagram Building” on Park Avenue seems to steal the show.

MacCarthy ends the biography with a passionate claim that Wolfe’s From Bauhaus to Our House “is a travesty of truth.” It is not clear why she should be so adamant: if Wolfe painted Gropius as a doctrinaire, was that not because he saw in the Bauhaus hints of something less salubrious than what MacCarthy herself saw? Throughout, MacCarthy presents a mostly wholesome image of Gropius as a consummate, apolitical artist, but she does make note of some of his flaws: some of Gropius’s early projects were related to the Nazi state (“What would we have done?” she asks), and his letters contain some unsettling references to Aryan qualities. These details complicate her valorizing portrait — a complication that remains unresolved in the biography (although, presumably, Gropius’s later marriage to a Jewish woman absolves him of any charges of anti-Semitism).

Biographical details aside, though, surely Bauhaus’s stunning and innovative but at times clinical style leaves room for critique of the Wolfeian variety? Wolfe was a provocateur extraordinaire; in response to From Bauhaus to Our House, The New York Times architecture critic Paul Goldberger wrote that Wolfe was immune to Bauhaus because he simply couldn’t see — he didn’t recognize the beauty of Seagram Building, for example. Janet Malcolm, writing for The New York Review of Books, was even more scathing about Wolfe’s shortcomings as a wannabe architecture critic. In this sense, MacCarthy is absolutely right in fearing that any of Gropius’s legacy should rest on such a scanty reading of his achievements. Her own take, however, offers insufficient consideration of why some critics of International Style, and its postmodern offshoots, might find it soulless. Despite these minor shortcomings, and (perhaps justifiably) name-dropping Wolfe instead of presenting him as a critical foe to contend with, Walter Gropius is a luminous, vigorous study of a prodigiously gifted man driven by singular passion.

Walter Gropius: Visionary Founder of the Bauhaus by Fiona MacCarthy, published by Faber & Faber, is available from Amazon and other selected booksellers.