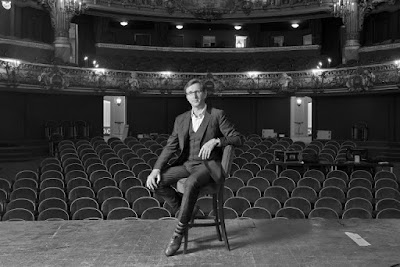 It is with pride and conviction that I present to you the first season of my third mandate at La Monnaie. As represented in this brochure, it reflects an important evolution: for the first time, we did not elaborate around a specific season theme, but rather around a new ‘architecture’, which can serve as a blueprint for the seasons to come. This new structure will allow us to give creation and experimentation every chance, and at the same time we will ensure that this turn towards the future is not synonymous with discontinuity. We will keep offering you projects of the very highest level, with in 2019–20 no fewer than eleven opera titles. This is a record, but also, given the number of new productions, a huge challenge for all the departments and staff members of our house.

IN THE NIGHT WE SAW VOICES.
LADY MACBETH (MACBETH UNDERWORLD, SCENE 2)
The season opening is a clear and unambiguous statement: we launch each season with not one, but two world premieres! A powerful antidote to the cultural pessimism that conceals itself behind the adoration of the Great Repertoire from the past. Whoever really believes in this art form must also open up their house to the leading composers and librettists of the day and challenge the new generation. That is precisely what we wish to do with two commissions presented in parallel: an opera by a renowned composer and an opera debut by an emerging talent.

Macbeth Underworld is a title that addresses instinctively the darker half of our imagination. This third La Monnaie commission for the French composer Pascal Dusapin will be a nightmarish opera full of sound and fury in which, rather than Macbeth the man of power, Macbeth the mystery will emerge from the shadows. Fortunately, our two guides in this macabre realm of spirits are reliable: our Music Director Alain Altinoglu and the French Shakespeare prodigy Thomas Jolly. The same holds for Georg Nigl and Magdalena Kožená, who take on the roles of the diabolical couple.
What is suggested rather than described is also a central theme in Le Silence des ombres. Benjamin Attahir, the figurehead of the new generation of French composers, will set Maurice Maeterlinck’s Trois petits drames pour marionnettes to music. In all their suggestiveness and compactness, these pieces lend themselves perfectly to an opera adaptation. Together with writer-director Oliver Lexa, a debuting team of designers and a cast of young singers and musicians, Attahir will conjure a world in which a lot remains unsaid and unseen, but not unsung for all that………………………………