Alison Klayman’s The Brink is stuck between the idea of Bannon as the Great Manipulator and Bannon as just another hateful fascist agitator. 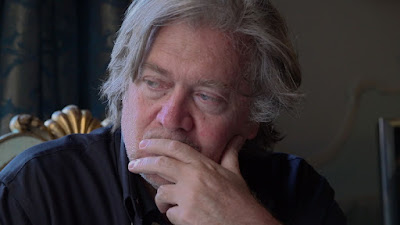 From The Brink (courtesy Magnolia Pictures)

After the 2016 presidential election, there was a brief period during which Steve Bannon was America’s biggest liberal boogeyman. Time gave him a cover story calling him “The Great Manipulator,” putting him in sinister lighting with a thinking man’s pose. Various profiles marveled with consternation at how well-read he is. Confronted with Donald Trump’s seemingly impossible victory (well, “victory” — Electoral College and all that), some pundits decided the best explanation was that the guy running his campaign was a genius supervillain all along. (If they weren’t insisting that Trump was actually that supervillain himself, in disguise as a buffoon.) But then the administration kicked Bannon to the curb in 2017, and he went from a main character to a recurring bit actor in political news coverage, popping up again mostly after he decided he’d try to play kingmaker with Roy Moore in Alabama.

Attention toward Bannon has dwindled, but documentary filmmaking can be a slow process, so we’re still getting not one, but two profiles on the man. One, Errol Morris’s American Dharma, hasn’t gotten a wide release since running the film festival circuit last year, with Morris recently deciding to simply distribute the film himself. The other is Alison Klayman’s The Brink, now headed to theaters. Klayman was embedded with Bannon shortly after his dismissal from the White House, and her team followed him for over a year, as he turned his attention toward America’s midterm elections and advising various right-wing movements in Europe. The resulting portrait is deeply confused, stuck between the idea of Bannon as the Great Manipulator and Bannon as just another hateful fascist agitator.

On one hand, the film’s warts-and-all (or weird, lumpy, blush-and-all) access continually undermines the perception of Bannon as an imposing figure. It’s not simply that we see him drink kombucha for his health, or trot out the same corny jokes at various events. (His favorite is to declare “A rose between two thorns!” whenever he positions himself and another man on either side of a woman for a photo op.) Any vile person will demonstrate all the ways they are utterly normal if you get to see them in private settings; few viewers are shocked by that anymore. The movie also acts as a continual chronicle of failure — in turn, Bannon gets dropped from the Trump administration, he loses the backing of his patrons, the Mercers, and his handpicked candidates get beaten in the midterms.
But how do you square this guy who loses so much with that one very big win he has under his belt? The liberal imagination can’t understand 2016 in terms of Democrats failing to stir enthusiasm among its base, instead just pointing to Trump and saying “We aren’t that.” Nor can it understand Trump and his victory as the natural endpoint of decades of conservative rallying and the undermining of minority voting rights. Many steadfastly insist on a villain or a group of villains to point to: Trump, Bannon, Russia, etc. The result is that a man who has mostly failed upward through a career of abortive ventures into World of Warcraft gold farming and producing shitty movies is seen as some kind of string-puller.

So The Brink has as its main subject a schlub who’s not all that intelligent, charismatic, or successful. Yet the movie still links him to rising nationalism in Europe, even though such movements have been building just fine on their own without him, and will likely win or fail regardless of his contributions (though he’ll surely claim some credit for any wins). It ties him to fascist violence in the US as if he is its cause and not just another symptom of a greater problem. It plays sinister music as it cuts together shots of him with shots of violence against refugees in Germany. Hell, it’s titled “The Brink,” and the poster features a rendering of him standing over the globe itself. The movie ends on a note of trepidation about the upcoming EU elections. But how will all its hand-wringing look if Bannon again fumbles and his allies don’t pull through?

It’s interesting to compare the critical reception for The Brink against that of American Dharma. Morris’s film was lambasted for apparently failing to properly take Bannon to task for his actions and ideology. (I did not attend the film festivals that screened the film, so can’t contribute to that specific discussion.) Klayman, meanwhile, has been praised for not getting “suckered” by Bannon, or somehow not giving him a platform. The subtext seems to be that The Brink is preferable because it does a better job of making Bannon look bad. But that does not necessarily translate to any real insight on who Bannon is or what he represents.