JULIANNE MOORE IS UNDER FIRE IN SEARING BEL CANTO TRAILER

The Oscar-winning actress plays an opera singer taken hostage in the upcoming thriller, premiering its trailer exclusively on VF.com.
by YOHANA DESTA
Julianne Moore is under attack. In an exclusive new trailer for the Oscar-winning actress’s upcoming film Bel Canto, Moore plays Roxane Coss, an opera singer whose glitzy performance at a Japanese embassy in an unspecified South American country turns into a turbulent affair when rebel fighters barge in and take everyone hostage. 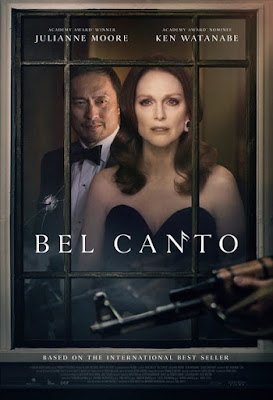 Directed by Paul Weitz (About a Boy), Bel Canto also stars Ken Watanabe as Katsumi Hosokawa, an esteemed industrialist with a deep admiration for Coss. Over the course of the hostage crisis, Coss and Hosokawa grow closer and closer, clinging to one another and getting romantically attached as violence brews around them. The film also delves into the perspective of the rebel fighters, who take the hostages because they want their country’s militaristic dictator to release political prisoners.
Everything they do is “for the people,” they remind one another.

Though the hostile takeover starts off cleanly enough, it’s only a matter of time before one of the younger rebels accidentally shoots and kills one of the hostages, setting off a chain of even more chaotic events. There are even whispers that if the government regains control of the takeover, it’ll kill all the hostages anyway and pin the tragedy on the rebel fighters. It’s not long before Coss becomes a key member of the hostage crisis, asked by one of the rebels to go out and sing to the military soldiers waiting outside the embassy. “When they hear the beauty of your voice, perhaps they will find a solution,” one of the rebels urges. (Ah, if only beautiful opera could always solve the world’s problems.)
From there, it’s up to Coss to decide what her next move should be. Moore, it should be noted, does a fair bit of excellent lip-syncing in the trailer; the opera is actually performed by lyric soprano Renée Fleming, the celebrated diva who recently earned a Tony nomination for her supporting role in the musical Carousel.

Bel Canto is based on the 2001 novel of the same name by Ann Patchett, which was itself adapted into an opera in 2015. The film will hit theaters on September 14. Take a look at the exclusive poster below.