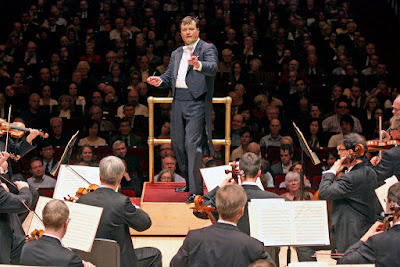 Christian Thielemann, seen here at Carnegie Hall in 2013, is the music director of the Bayreuth Festival, which places unusual demands on both conductors and singers.CreditHiroyuki Ito for The New York Times

BAYREUTH, Germany — The Bayreuth Festival Theater famously leaves audiences sweltering. When I arrived here last week, my Airbnb host warned, “If it’s hot outside, it will be even hotter inside.”

Imagine, then, what it’s like to be in the orchestra pit.

Some of Wagner’s operas — his 10 major works are the only ones presented by the 142-year-old Bayreuth Festival — run well beyond four hours. But the pit is cradled under the stage, virtually hidden from view. So conductors can get away with a lax dress code.

“I wear jeans and a T-shirt, maybe a polo, and I change every act,” Christian Thielemann, the festival’s 59-year-old music director, said in a phone interview before a performance of “Lohengrin” this week. For curtain calls, he quickly changes into what he calls his “Mao suit,” sweats through that, then escapes offstage for a cognac or whiskey and a shower.

“It’s good that you don’t see everything that happens here,” he said with a laugh. “It’s funny, very human.”

Mr. Thielemann is something of a rarity, a conductor who has thrived — so much so that his title, music director, is more or less unprecedented — at a festival that is known to challenge even the most established maestros. The design of that sunken pit is the problem: Its idiosyncratic design makes for awkward delays as sound travels to and from the stage, and to the audience in the theater. Some guests never return after one season.

But when the pieces of this aural puzzle fit together, the results are magical. Sound emerges from the pit perfectly balanced with the chorus and soloists, as if the performance were being edited in a recording studio and broadcast in real time. Mr. Thielemann’s “Lohengrin” Prelude enveloped the house with a mysterious, sublime shimmer.

“When I need my Bayreuth ears, I have to cut my normal ears off, and then someone puts the new ears on,” said Mr. Thielemann, who tends to speak poetically. “At the end of the summer, the new ears are cut off, and then I have my old ears back.”

For all his artistry, Mr. Thielemann approaches his work with a craftsman’s care. Indeed, he’s even a bit old-fashioned and regularly praises the traditional role of the Kapellmeister in German churches and theaters. His beliefs have also earned him a reputation as a conservative, even far-right, sympathizer.

He didn’t go out of his way to dispute that perception in the interview this week. When asked about theater and opera companies — state-funded institutions in Germany — engaging in politics, he spoke vaguely and suggested that taking a liberal stance was fine as long as organizations also made room for “other opinions.” When pushed on the matter, he said, “I’m sorry, I have to leave for the ‘Lohengrin’ now.” 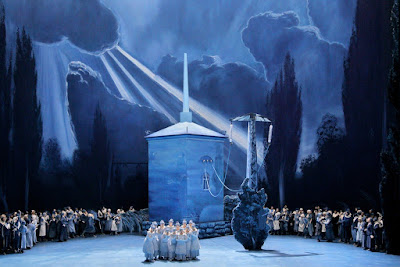 Mr. Thielemann is conducting the new production of “Lohengrin,” directed by Yuval Sharon, at this year’s Bayreuth Festival.CreditEnrico Nawrath

Here are edited excerpts from the conversation.

How do you change your conducting for Bayreuth?

The sound is so different that you have to do certain things like a mechanic: You close a window here and you open another there, or you need some more hot water or cold water. It’s kind of like an electrician or plumber, how you try to get the right mixture of sound. It’s very much a Kapellmeister task. I know that in the English-speaking world, the word Kapellmeister has not a good sound: boring, uninspired conducting. But when you have these skills, the conducting becomes second nature, and then you can make your art.

Where do you see yourself in the tradition of Bayreuth conductors?

I have my own point of view, but yes, I think the traditional Kapellmeister tradition has been good for Bayreuth. If you see all the great conductors, they were Kapellmeisters: Karajan, Knappertsbusch and Furtwängler. They were successful here, but you will see they had this typical Kapellmeister career.

What is your philosophy for hiring singers?

I like singers who do not bark too much. It’s strange, but the singers who give too much voice are not good for Bayreuth. And everyone, even famous singers, have to make an audition. It’s not really an audition for the opera, but for the house. The house lives; I try to explain to them that the house is living as an animal. The house, like a dog, wants to sniff a little bit and see if you are nice to him. Not everyone wants to do it.

Right-wing politicians have criticized theaters for taking stances on political issues and the refugee crisis. Where do you think the Bayreuth Festival does or should fit into this?

Don’t forget Bayreuth is a provincial city. It is famous because the sister of Frederick the Great and Wagner, but it is very calm and in a good way provincial. I find the mentality is very laid back. You can see how because so many people are overweight: They love eating and drinking wonderful beers. It’s very different from Berlin and the bigger cities, so the political earthquakes are far away.

But there were protesters and counterprotesters at the opening night of “Lohengrin” as politicians walked the red carpet.

They are carried out here just to appear on television. Don’t misunderstand that. I don’t know that they were really from Bayreuth. Protesters and politicians come, and you can write something for the newspaper, but one day after, everything is gone. It is a storm in a glass of water.

Regardless, what should a theater’s role be in engaging with politics?

My opinion is that I’m a little bit overfed with politics in a theater. I think you should say something, but you also allow for other opinions. You have to have respect for even people you don’t respect.

So you think liberal theaters should make room for conservative opinions?

Well, you are doing something wrong if your view harms another person. Certain opinions are for a good reason forbidden. That’s when you’re going too far.

You know, if you say racist opinions or whatever. There are certain things that are forbidden. They are banned. That’s very good. But you can still express things which are a bit uncomfortable. You cannot say every opinion; there is a limit, and you have to stop at a certain point. But before we come to that stop, there is so much space left, you see?