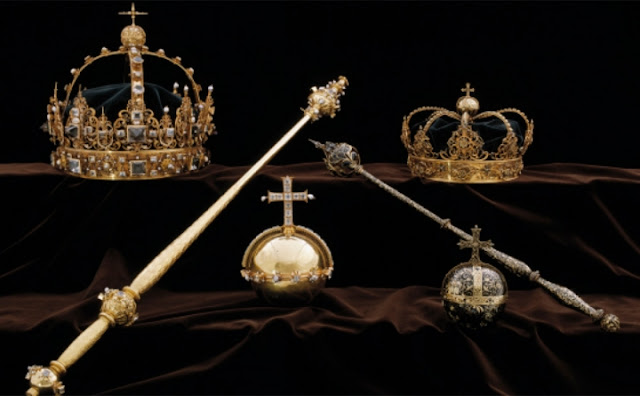 Art Movements is a weekly collection of news, developments, and stirrings in the art world. Subscribe to receive these posts as a weekly newsletter.

On Tuesday, July 31, three of Sweden’s crown jewels were stolen from their display at the Strängnäs Cathedral near Lake Malar outside Stockholm. The thieves broke the protective glass and made out with two crowns and an orb, fleeing, in broad daylight, on bicycles and then reportedly escaping by boat. The fugitives are still at large. Authorities have registered the missing artifacts with Interpol and have divers searching the lake.

224 works of art in the British Parliamentary collection have gone missing, including William John MacLeod, “Houses of Parliament, Burning of the Debating Chamber from Star Chamber Court” (1941) (posted below). The collection has accumulated over 9,000 works since 1841, the majority on view at the Westminster estate. Authorities from the House have blamed database errors for the unaccounted-for paintings, illustrations, etchings, prints, and cartoons, but cannot be sure if the artwork has been stolen. 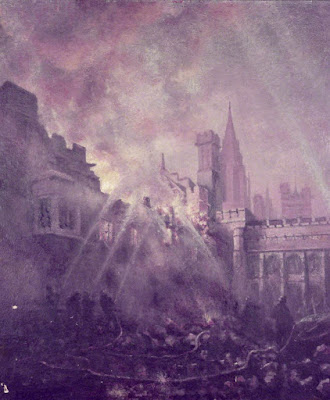 An artwork honoring 34,361 refugees and migrants who passed away while journeying to the United Kingdom has been destroyed. The list was produced for World Refugee Day and was plastered across public hoardings in Chinatown as part of the Liverpool Biennial.

A German farmer was awarded nearly $1 million by the German government after archaeologists uncovered an ancient Roman bronze horse head on his property in 2009. Nearly ten years later, German courts have settled that the man is owed a cut of the rare find following the farmer’s lawsuit.

The remains of a Roman library has been unearthed by archaeologists in Cologne. Assumed to be the earliest public library in Germany, it’s reported that the massive building is up to 2,000 years old and likely held up to 20,000 scrolls.

A box of human remains was dropped off anonymously at the office of a national Inuit organization in Ottawa. The package included a human jawbone and several back teeth, Inuit artifacts, and a note. Natan Obed, president of Inuit Tapiriit Kanatami, says the ancestral remains hold a deep spiritual significance, and the unceremonious return of the items was heartbreaking.

Cartoonist Avi Katz was fired from the Jerusalem Post over a drawing comparing Benjamin Netanyahu to the dictatorial pigs of Animal Farm. The Jerusalem Post defends its decision, saying, “Freedom of speech has limits.”

Beyoncé will wield full executive control over Vogue’s 2018 September issue, which is often considered its most important. The artist has reportedly selected Tyler Mitchell, the magazine’s first Black cover photographer, to photograph her.

Rihanna appears as the first Black woman on the cover of British Vogue‘s September issue, the inaugural September installment under the control of recent Editor-in-chief Edward Enniful.

Artists Alliance Inc. and the Clemente Soto Vélez Cultural & Educational Center have announced a 6-to-12 month residency program servicing artists from Puerto Rico through a partnership with Embajada [via email announcement].

Northwestern University received a grant of $500,000 from the Andrew W. Mellon Foundation to fund a two-year program in Puerto Rico to foster their arts community after Hurricanes Irma and Maria.

Angela Gulbenkian is embroiled in a lawsuit, being accused of fraud after the sale of a $1.375 million Yayoi Kusama pumpkin that the buyer claims to have never received.

Vans announced a collaboration with the Van Gogh Museum to produce a collection featuring paintings by the Post-Impressionist.

The nonprofit Pocono Center for the Arts is planning a new center to directly support artists from the region.
The Jewish Museum received a major gift of 70 artworks from the Barnett and Annalee Newman Foundation. In addition, the Foundation donated $10 million for the endowment of the Jewish Museum’s first contemporary art curatorial position, for the care of the new collection, and for future institutional use. The gift includes works by Jasper Johns, Camille Pissarro, Robert Rauschenberg, Mark Rothko, Frank Stella, and the late Barnett Newman himself, among others. The artworks will be on display in a series of exhibitions beginning in 2019 [via email announcement].