Alina Cohen
In Caspar David Friedrich’s iconic Wanderer above the Sea of Fog (ca. 1818), a man wearing a dark green overcoat and boots overlooks a cloudy landscape, steadying himself with a cane. Mounted on a dark, craggy rock face, the figure stands at the center of distant, converging planes. Art historian Joseph Koerner, a professor at Harvard University, notes that the midpoint of the painting rests at the man’s chest. “The heart is the center of the universe,” he says. 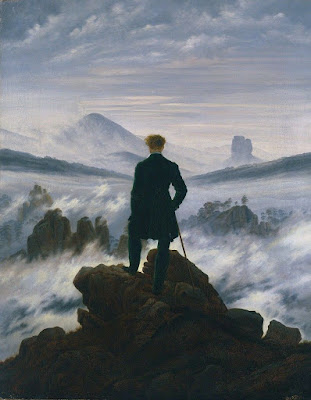 Over the past two centuries, the image has become a cultural icon. It adorned the cover of Terry Eagleton’s 1990 philosophical tome The Ideology of the Aesthetic. It has been used to illustrate Franz Schubert’s Winter Journey cycle, a classical music composition that evokes a gloomy, itinerant protagonist. You can even buy the image on a $69.99 hoodie.
Wanderer above the Sea of Fog is the quintessential Romantic artwork. The aesthetic began as a reaction against the Enlightenment values (logic, rationality, order) that partially contributed to the bloody, monarch-toppling French Revolution of 1789. Throughout Europe, writers, artists, and musicians turned to emotion, imagination, and the sublime for inspiration. Nature—wild, unbridled, and far more powerful than 19th century Europeans—became a major subject. In particular, the period exalted individuals and their strong emotions. Friedrich exemplified these qualities as he placed one man, gazing at a vast and unknowable territory, in the middle of his canvas.
Friedrich was born in Greifswald, Swedish Pomerania (now northeastern Germany), in 1774. Before he was 20 years old, his mother, two sisters, and a brother had all died. He was known, even then, for his melancholic and ironic personality, a seriousness reflected in his painting. Friedrich began studying art at the University of Greifswald in 1790, and then at the renowned Academy of Copenhagen in 1794. There,he studied with the well-established Danish portrait painter Jens Juel. In 1798, Friedrich moved to Dresden, though he took frequent journeys to inspire his landscape practice.
In 1808, Friedrich courted controversy when he completed one such landscape, Cross in the Mountains (1807–08), which he painted as an altarpiece. Featuring the crucifixion at the top of a mountain, with three beams of light reaching into the moody, high-contrast sky, the work posits that nature—which takes up more of the frame than Christ himself—was itself divine.
Scholars initially believed the work was a commission. In fact, Friedrich conceived of the piece as a tribute to King Gustav IV Adolf of Sweden (a plan quashed when the monarch was deposed in 1808). It was eventually acquired by an aristocratic family living in a Bohemian castle in Tetschen (in the modern-day Czech Republic), and the painting became known as the Tetschen Altar. 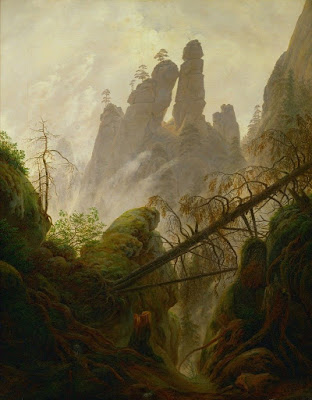 Soon after, in 1810, Friedrich was elected a member of the Berlin Academy, and then the Dresden Academy of Fine Arts in 1816. He’d secured his spot, for the moment, in the German art echelons. (His reputation eventually declined, and he died in 1840 as Realism was overtaking Romanticism.)
In 1818, Friedrich married Caroline Bommer and began a family (the couple eventually had three children). The same year, he painted the artwork that’s now nearly synonymous with his name. To construct the composition, Friedrich traveled to the Elbe Sandstone Mountains southeast of Dresden, sketching individual rocks and natural forms with intense detail. Back in his studio, he cobbled these together to create a new, imaginary landscape.
Between the viewer and the foggy distance, Friedrich painted a Rückenfigur, or a figure seen from behind. As Julian Jason Haladyn explains in his 2016 essay “Friedrich’s ‘Wanderer’: Paradox of the Modern Subject,” the subject serves as a surrogate for the viewer. “We look to this human presence as a means of determining the general scale of the scene,” he writes, “and, more specifically, of relating our physical bodies to the spatial parameters of the painted world.” Here, the brushy sky, like those of J.M.W. Turner, becomes nearly abstract.
The artist’s legacy suffered when Hitler and the Nazis claimed Friedrich as their ideological forebear in the 1930s. They connected his rapture for the German landscape with their slogan of “Blood & Soil,” which similarly romanticized national territory. This association turned off future scholars to Friedrich’s work for decades.
Finally, in the mid-1970s, scholar Robert Rosenblum attempted to connect the work of Friedrich and his peers (John Constable, Turner) with that of the Abstract Expressionists. He even gave a 1975 book the title Modern Painting and the Northern Romantic Tradition, Friedrich to Rothko; the work connected the two artists, as one reviewer wrote, via their search for “a unity of the self with the universe.” Famed critic Hilton Kramer, never one to mince words, called the idea “the sheerest hokum—brilliant hokum, amusing hokum, but hokum all the same.” And so, provocative as ever, Friedrich was back at the center of art historical discourse.
Scholars have been unable to definitively identify the model for the Rückenfigur, although Koerner has reached a probable conclusion. He believes that Friedrich painted a high-ranking forestry official named Colonel Friedrich Gotthard von Brincken, and that his clothing distinguishes him as a volunteer ranger for King Friedrich Wilhelm III of Prussia’s war against Napoleon. “Von Brincken was probably killed in action in 1813 or 1814, which would make the 1818 Wanderer above the Sea of Fog a patriotic epitaph,” Koerner wrote in the 1990 book Caspar David Friedrich and the Subject of Landscape. The work, he surmises, subtly celebrates a defeat over the French, illustrating a larger story about Prussian unification and German nationalism.
The painting offers thrills for contemporary viewers (it has been in the collection of the Hamburger Kunsthalle in Hamburg, Germany, since 1970), no matter what knowledge they bring to the experience. “Even if you haven’t studied the art, you feel it,” Koerner says about the particular magic of Wanderer above the Sea of Fog. “You feel that those summits that you see in the fog are not just figments of an artist’s imagination. They’re not made in the studio. Each of these peaks and valleys, each rock, each tree, has been observed and then refigured and restaged in the painting.” Two hundred years after Friedrich painted the work, the dreamy contours of the natural world—and man’s dramatized, awed relationship to it—still transfix, translated via oils and canvas.
Alina Cohen is a Staff Writer at Artsy.