Alina Cohen
One of Lucian Freud’s biggest collectors was a bookie. Alfie McLean, who founded A. McLean Bookmakers in Northern Ireland in 1962, allowed the famed British painter to repay (some) of his debts in paintings instead of pounds. When McLean died in 2006, he’d amassed about 23 artworks worth around £100 million. This association was just one of Freud’s many relationships with the United Kingdom’s underworld.
Gambling, according to Lucian’s grandfather Sigmund, was merely a substitution for masturbation. The artist rejected psychoanalytic interpretations overall, and in this case, the rationale seems unlikely. Instead, Freud’s gambling offered a counterpoint to the risk of painting in his early years, and later, as he became increasingly monastic about his studio time (and less of a betting man), a connection to the outside world: He loved horses and continued to watch races on television.
Perhaps most surprisingly, Freud’s betting activities won the misanthropic artist—known for his rampant adultery, violent temper, waitress-groping, poor overall behavior at restaurants, absentee parenting, and paintings of his nude pubescent children—both friends and portrait subjects from diverse social strata. It was simpler, maybe, for him to maintain relationships with people when his debts to them could be measured in pounds and cents. 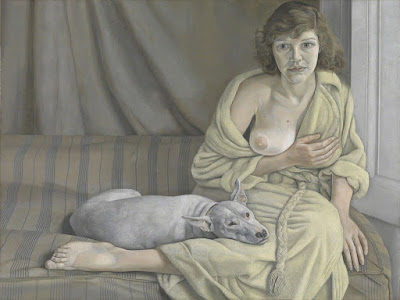 McLean, for example, is the subject of several Freud portraits. One, entitled The Big Man (1976–77), features a thick-necked man slouched in an armchair, clad in a double-breasted suit. In Breakfast with Lucian: The Astounding Life and Outrageous Times of Britain’s Great Modern Painter (2013), author Geordie Greig writes of the painting: “Every fold of his tight-fitting suit adds to the tension of this very bulky man trapped in this space.…A sense of physical threat hovers; this is not someone to fall out with over bad debts, and luckily they never did.”
McLean’s sons, Sam and Paul, also sat for a portrait. In The Two Brothers From Ulster (2001), the duo wears more casual clothing than their father: blue button-down shirts, one entirely untucked. “He was very fond of their father,” says David Dawson, Freud’s long-time assistant and a contributor to Phaidon’s major new monograph on the artist. “The more he knew a person, he always felt the better it was, that he’d get more information to make a painting. There was a lineage there already.”
Notably, when Dawson met Freud in 1990, he was only interested in horse races from afar—the racetrack would take too much time away from his painting. Now, many of the McLeans’ paintings (including The Two Brothers From Ulster) are on long-term loan at the Irish Museum of Modern Art in Dublin.
Yet over the decades, Freud owed McLean so much money that these portraits alone wouldn’t suffice. In 1992, when American art dealer William Acquavella began representing the painter, he first had to pay McLean £2.7 million to settle the pair’s existing balance.

“Lucian once told me that in the 1960s, a decade when his work was out of fashion and hard to sell, gambling helped him,” Freud biographer Martin Gayford wrote in an article for The Spectator in 2013. “Did he mean it helped him to make money? No, he answered, it helped him not to care too much about money.” Though Freud claimed not to care about his finances and seemed unconcerned about whether his paintings sold, he never had too much to worry about—by his late twenties, he’d already earned art world respect.
Freud liked both winning and losing—no matter the outcome, the noted workhorse could always go home to paint (he maintained his practice until he died, in 2011, at age 88). When he became more successful, and his art-making itself was less of a gamble, he curtailed his horse-betting, as well.
If Freud’s relationship with McLean was cordial, he maintained a more tense friendship with the thuggish Kray twins, Ronnie and Reggie. The pair owned nightclubs, set off fire bombs, conducted robberies and a few murders, partnered with the American mafia, and supplied Frank Sinatra with bodyguards.
Freud amassed £500,000 worth of debt to the brothers’ gambling outfit. Once, they threatened to cut his hand off unless he produced £1,000 for them. In that case, Lord Jacob Rothschild came to his rescue—throughout his life, Freud relied on his wealthier friends and patrons (in his lifetime, Freud also painted the likes of Kate Moss and Queen Elizabeth II) to settle his troubles with his less refined acquaintances.
In Jumpin’ Jack Flash: David Litvinoff and the Rock‘n’Roll Underworld (2016), writer Keiron Pim suggests that Freud may even have ordered the Kray twins to brutalize David Litvinoff, a gossip columnist-turned-film consultant. In a twist worthy of Hollywood, the pair met when Freud discovered that Litvinoff, who resembled the painter, had been impersonating him in bars to put his drinks on Freud’s tab. 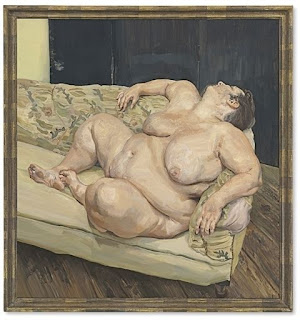 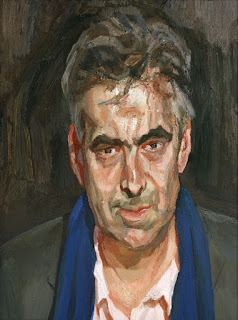 Upon learning of the scam, Freud requested that Litvinoff sit for an uncanny, near-self portrait. He titled the 1954 work The Procurer, referring to Litvinoff’s rumored procurements of young male sex partners for Ronnie Kray. Litvinoff was livid about the title, threatening Freud until, apparently, the latter got his gangster cronies to scare him into retreat.
Freud, of course, isn’t the only blustering male painter to ever extend his brutality beyond the canvas. Most famously, Caravaggio killed Ranuccio Tomassoni in 1606. Historians long believed the murder resulted from a dispute over a tennis match, though a 2002 documentary suggested that tension actually stemmed from both men’s desire for a prostitute named Fillide Melandroni. Caravaggio tried to cut off his opponent’s testicles, which led to his death.
Freud’s friend and contemporary Francis Bacon also indulged in gambling. In Francis Bacon in the 1950s (1996), Michael Peppiatt writes: “Bacon approached gambling exactly as he approached painting—as an activity that depended on inspired luck. He was excited by the terrific highs and lows that gambling, like painting, procured.”
If Freud’s gambling debts won him great subject matter, writer Melvyn Bragg suggests that Bacon’s practice improved in a more tangible way: Impoverished and unable to afford new canvases, Bacon turned the old ones around and began painting on their backsides.
“Unlike Lucien [sic]—who came to the end of his gambling when his great riches meant that losing £1 million in a single day made no difference—Francis never lost the umbilical tug to the tables. Chance was his god,” writes Bragg.
Freud’s gambling, then, was never about winning. Like many of his decisions—associating with gangsters; mistreating his family—his negative balances became symbolic of more significant losses. His monastic studio practice found its counterbalance in his fiscal and interpersonal recklessness. Though 10 of his 14 children inherited his £42 million (after tax) estate upon his death, his emotional debts to his family and everyone else he mistreated are still outstanding.
Alina Cohen is a Staff Writer at Artsy.