BY JPOST EDITORIAL
When Uri Avnery – who died Monday at the age of 94 – was running for the Knesset in the 1970s, one of his campaign posters promised a series of radical initiatives: Separation of state and religion; a five-day work week; legalized abortion; civil marriage; air conditioning in all buses and taxis; equal status for Reform, Conservative and Orthodox rabbis; and free university education. Decades later, many of these ideas have either entered the Israeli mainstream or are topics of discussion.
He is less remembered for many of these mainstream views – of which he was a forerunner at the time - as he is remembered for being a controversial advocate of peace.
“Avnery devoted himself entirely to the struggle to achieve peace between the State of Israel and the Palestinian people in their independent state,” Gush Shalom’s Adam Keller said in a statement on Monday. 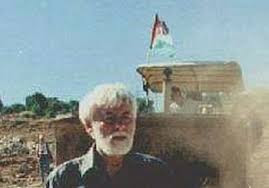 His support of peace was most controversial in the 1970s and 1980s because it focused on Palestinians, not the prevailing policies whereby Israel was making peace with Egypt. His meeting with Yasser Arafat in 1982 was seen by critics as whitewashing Palestinian terrorism. And he had harsh words for Israel. In an April 2018 op-ed he recalled his own IDF service before disassociating himself from “the army sharpshooters who murder unarmed demonstrators along the Gaza Strip, and from their commanders, who give them the orders, up to the commander in chief.”
It’s harsh, controversial language that is offensive to mainstream Israel and Israel’s supporters, but the Avnery legacy is not just harsh criticism for the government’s policies. His real legacy is that he critiqued the country’s heavy-handed policies in the 1950s when it was much more difficult to do so, and carved out a space in which criticism and debate would be acceptable.
The 1950s and 1960s were a more austere time in Israel: when the security services had more power; when criticism of government policy was more difficult – especially treatment of the Arab minority or other issues, such as the highlighting of racism against Jews from the Middle East in the 1950s. He wrote with passion about the ill-treatment of Mizrahi Jews, and the Wadi Salib riots of 1959. In January 2018 he wrote with pride of help he had given to the Black Panthers movement.
Avnery founded a political party which received one seat in the 1965 elections. It called for the end of the curfews and martial law imposed on Arab communities in Israel and for more freedom for the press and a reduction in the powers of the security services. It also called for a withdrawal from the areas captured in 1967.
When we hear today about Israel abandoning its democratic traditions or criticism about issues – such as alienation of the Diaspora due to the power of the rabbinate; the lack of various freedoms; and checks on government power or the nation-state law – it should all be seen through the lens of Avnery’s critiques of the 1960s.
The struggle for democracy in Israel, freedom of the press and other basic freedoms has not been a one-way street. We are too often provided a rose-colored portrait of Israel in the 1950s and then told that Israel today is besmirching the ideals of the founding generation. But the reality is that Israel has always been a complex country with different and competing identities. In many ways the 1950s and 1960s was a less democratic, more restrictive period. Avnery’s magazine, his political movement and his struggles are a window into this legacy.
The legacy is a mixed one. While Avnery was right about reducing the heavy-handed power of government to curtail basic freedoms such as the press, and about the need to reduce racism and abuses against minorities, he and his political followers were mistaken in their assessment of the nature of Yasser Arafat and the Palestinian national movement. Arafat presented a “polite, gentle, somewhat delicate” face to the peace camp, while supporting terror.
Avnery didn’t give up hope though. He wrote in September 2013, “there are two nations in this country, and they must choose to live together or to die together. I hope they choose life.” His legacy should be to encourage us to choose the hope of life over those voices of hatred and division who too often predict a dark future.