AS BREXIT LOOMS, MUSICIANS BRACE FOR THE WORST 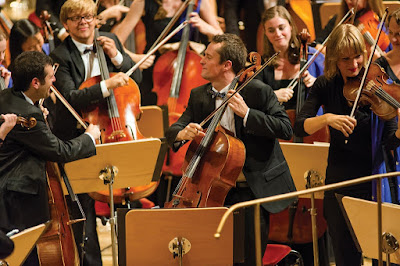 The European Youth Orchestra is relocating from London to Ferrara, Italy, before Britain leaves the European Union.CreditPeter Adamik

LONDON — The composer Howard Goodall was passing through a London airport in March en route to a conducting gig in Houston. Idling at the currency exchange desk, he got into a conversation with an employee about whether Britain’s departure from the European Union, known as Brexit, would be good for his industry. When Mr. Goodall said no and suggested that the consequences would be “disastrous,” the clerk replied that everyone he asked that question “gives the same answer.”

Mr. Goodall posted the exchange on Twitter and soon found he had touched a nerve: his message got at least 1.6 million views, about 8,500 retweets, and nearly 19,000 likes. When a Brexit-supporting member of Parliament, Nadine Dorries, asked him to explain why, exactly, the impact would be so negative, Mr. Goodall responded on his blog, in a passionate, closely argued piece, 3,400 words long.

“Well, I needed to say something,” Mr. Goodall said in a recent interview.

As Britain lives through the psychodrama of Brexit — a  deal negotiated by Prime Minister Theresa May in  July quickly led to the resignation of some senior lawmakers from her cabinet, and the power struggles within the governing Conservative party seem to be multiplying — business leaders have become increasingly spooked.

Carmakers and financial institutions, airplane manufacturers and the energy industry: All have voiced anxiety about how much negotiation remains to be done. Last month, Amazon weighed in: Doug Gurr, the company’s most senior executive in Britain, warned that if the country left the European Union without negotiating a new arrangement with the bloc (the “no-deal” scenario), there could be civil unrest.

In comparison, the cause of classical music perhaps seems trivial. But plenty in the sector are unsettled. Musicians, including the pianist-conductors Vladimir Ashkenazy and Daniel Barenboim have expressed grave doubts. In December, the Association of British Orchestras produced a detailed study, pointing out how many ensembles relied on multinational touring and numerous other benefits that flowed from European Union membership.

In July, the House of Lords, the upper chamber of the British Parliament, released a report warning that the government’s plans for life outside the bloc were worryingly vague, particularly when it came to immigration. There could be grave repercussions for the cultural sector if it became harder for performers and creative artists to enter Britain, it said. 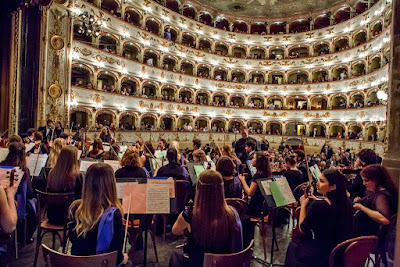 The European Youth Orchestra performing in Ferrara. The ensemble’s chief executive, Marshall Marcus, said he saw the move as an opportunity rather than a retreat. “You can’t ask for E.U. funding and then not be in the E.U.,” he pointed out.CreditMarco Caselli Nirmal

By then, the European Union Youth Orchestra had long since announced that its administrative team would be leaving London for a new home in Ferrara, Italy. “You can’t ask for E.U. funding and then not be in the E.U.,” its chief executive, Marshall Marcus, pointed out.
Months after his encounter at the airport, Mr. Goodall still seems incensed. He is a realist, he said: Classical music was never going to be top of the priority list. But he felt that the arguments were being drowned out by bigger, better-funded lobbying groups.

Mr. Goodall said that while many of Britain’s traditional industries had withered, culture was one area where it still produced world-class exports. According to the government’s own Department for Digital, Culture, Media and Sport, the creative industry created around 92 billion pounds, or about $126 billion at current exchange rates, for the British economy in 2016.

“The music business is international, and in this country we have an international reputation,” Mr. Goodall said. “We’re at risk of losing it.”

Michael Jay, the chairman of the committee that wrote the House of Lords report, agrees. “Individuals working in the U.K. cultural sector are highly mobile, and have thrived on collaboration with people from all over the world,” he said in a statement.

For the creative industry, a major problem would be created if Britain detaches from agreements guaranteeing freedom of movement in the European Union — something that enables citizens not just to travel anywhere within the bloc, but to work anywhere, too. Mrs. May has said that Britain will withdraw from the system of free movement, but has yet to clarify what immigration rules will replace it, talking vaguely of a “mobility framework.”

If British ensembles are required to organize visas for every concert in, for example, Amsterdam or Berlin, as well as licenses to travel with their instruments, they would find it harder to tour — and, given the likely costs, it would be much harder to make touring financially viable. 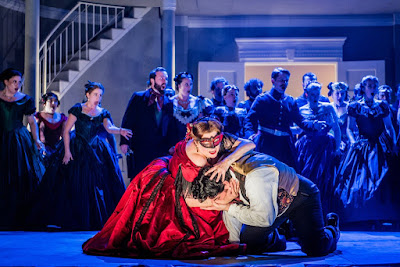 Opera houses are particularly vulnerable, said Wasfi Kani, who runs Grange Park Opera, a successful small-scale company based in Surrey, south of London. “If, say, your Italian tenor singing ‘Un Ballo in Maschera’ suddenly goes sick and you need a replacement, that would get a lot harder,” she said, referring to the Verdi opera.

Ms. Kani said that the Grange Park Opera was “very dependent on European singers” and that British performers benefited from having to compete with musicians from abroad. “It raises everyone’s game,” she said.

There are myriad other concerns for the sector: the fate of thousands of students from other European Union countries in British music schools, Pan-European regulations on intellectual property, and cultural funding that flows directly from the bloc’s institutions. While haggling over Britain’s exit continues, all those issues are up in the air.

“It’s a very messy situation,” Mr. Goodall said. “It’s the same in so many industries, from pharmaceuticals to technology. And the issue is, there so few answers. No one seems to know.”

John Whittingdale, a Brexit-supporting member of Parliament and a former minister who ran the culture department, said in an interview that such anxieties were alarmist. “We have some of the best orchestras, musicians and conductors in the world, and that has nothing to do with the E.U.,” he said. “The concerns that musicians have are largely to do with the arrangements once we leave, and those will be in our gift. They will depend entirely on the immigration rules that we put in place.”

Mr. Whittingdale added that he hoped that after Britain’s exit it would be easier for performers from anywhere in the world to come to Britain — not just European Union citizens.

In an interview at the Southbank Center, a London arts venue close to the offices that the European Union Youth Orchestra has recently vacated, Mr. Marcus was eager to present the ensemble’s move to Italy as an opportunity rather than a retreat. But the reality was that young British instrumentalists were likely to lose out, he said. “We’re currently in our own version of a transition period, but after 2020 we’ll have to see how things shake down.”

He said he was also anxious that Britain would end up more isolated, culturally as well as politically. “The U.K. has a thriving cultural scene; it might not disappear overnight. But over a 50-year period, who knows?”

There are signs that, amid all the other sound and fury over Brexit, politicians are starting to pay more attention to the concerns of the creative industry. The House of Lords report has brought the issue a little higher up the lawmaking agenda, though what that will mean in practice is — as with nearly everything else surrounding the issue — difficult to judge.

In a statement, a spokesman for the culture ministry said, “We recognize the need for classical musicians to tour across the E.U. without prohibitive restrictions and to regularly move goods on a temporary basis.”

Not everyone is reassured. At the Eurostar terminal in London on a recent morning, members of Aurora Orchestra were waiting to catch the early train to Paris.

Asked about Brexit, Ruth Gibson, 32, a viola player originally from Ireland but who is now based in London, rolled her eyes. “Honestly, I’m trying not to think about it,” she said. “We’re freelance musicians; more uncertainty is the last thing we need, to be honest.”

On the program that evening, she added, was Mozart’s Symphony No. 40 — music by an Austro-German composer being played by a London-based ensemble whose members come from across the European Union.